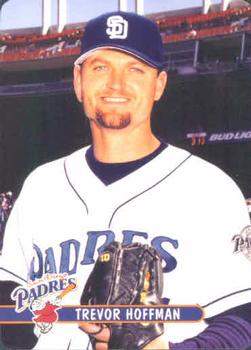 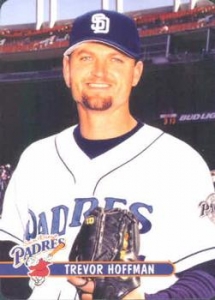 When the San Diego Padres defeated the Arizona Diamondbacks, 3-1, on the afternoon of September 30, 2006, the victory clinched a playoff berth for the team. But on October 1, the final day of the season, they remained tied with the Los Angeles Dodgers for first place in the National League Western Division.

The Padres had won the division in 2005 and were hoping to repeat. If they did, it would be the first time they had won consecutive division titles. They had overcome a 9-15 record (.375) in April but with one game left in the season their record was 87-74. Since baseball began using a wild-card team in the postseason, only one team, the 2001 Oakland A’s, had a sub-.400 record in April and later made the playoffs. The Padres and the Minnesota Twins both made the playoffs in 2006 after recording a .375 winning percentage in April.

The Padres were closing the regular season against the Diamondbacks. A crowd of 48,946 packed the Phoenix ballpark on this final day of the season. Many had come to bid farewell to Luis Gonzalez who would not be returning next year since the team had announced that they would not exercise their option on his contract. The team painted a purple “20” in left field and showed tributes from fans on the center-field videoboard between innings.

Bruce Bochy, San Diego’s manager, sent Woody Williams to the mound. After struggling in 2005, Williams had pitched well this season. He came into the game with an 11-5 record and had won his previous four starts, maintaining a 1.90 ERA during that span. The Diamondbacks started Brandon Webb. Although Webb eventually won the Cy Young Award, he had struggled in the latter part of September, losing on the 21st and going eight innings without getting a decision on the 26th.

San Diego jumped out to a 1-0 lead in the first inning. Adrian Gonzalez hit a two-out single to center field and came home when Mike Piazza doubled down the right-field line. Piazza had signed with the Padres as a free agent the previous winter and had a good season, hitting .283 as the Padres’ starting catcher and cleanup hitter.

The Padres broke through for six runs in the fourth inning. Gonzalez led off with his second single of the game, went to third when Piazza hit his second double of the game, and scored on Webb’s wild pitch. Webb struck out Russell Branyan and Terrmel Sledge and then things fell apart for him.

First, he gave up a single to Geoff Blum that scored Piazza. Josh Barfield singled, then Woody Williams hit an RBI single. Webb needed just one more out but it remained elusive. He walked Dave Roberts to load the bases and then walked Brian Giles to bring home the Padres’ fourth run of the inning.

Gonzalez came to bat for the second time in the inning and hit a two-run double, his third hit of the game. Webb finally got out of the inning when he struck out Piazza for the third out.

The Diamondbacks slowly climbed back in the game when they scored a run in the fourth and another in the fifth. They got two more runs in the bottom of the seventh when Chad Tracy hit a two-run blast over the center-field wall. They might have been able to score more runs but Giles made a sensational catch on a fly ball by Carlos Quentin. The Padres’ lead was cut to 7-4.

As they drew closer, the Diamondbacks relied on their bullpen to hold the Padres in check. Arizona manager Bob Melvin used four pitchers from the fifth inning through the eighth

The Padres almost scored another run in the top of the ninth when Adrian Gonzalez and Rob Bowen hit consecutive singles. But Jose Valverde came out of the bullpen to get the next two outs.

With a one-run lead, the Padres called on their closer, Trevor Hoffman. Hoffman had recorded 45 saves that season, the second-highest total of his career. He would finish second to Webb in the Cy Young Award voting. With Hoffman on the mound, the Padres felt reasonably confident about clinching their second consecutive division title.

Hoffman got leadoff batter Eric Byrnes to pop out to the second baseman, but then he gave up consecutive home runs to Tracy and Conor Jackson. Suddenly the score was 7-6 and the Padres’ division title was not looking as secure.

Hoffman walked Quentin. When Chris Snyder hit a groundball that forced out Quentin at second, Melvin replaced Snyder with pinch-runner Chris Young and sent Alberto Callaspo to the plate to hit for Valverde.

Callaspo hit a grounder past first. Second baseman Josh Barfield fielded and threw wildly to first, forcing Gonzalez to come off the bag. Gonzalez quickly threw to Khalil Greene at second base. The throw beat Young but Greene failed to tag him. Second-base umpire Larry Poncino initially called Young safe because of the no-tag. Bochy immediately ran from the dugout and argued that the Padres’ failure to get an out at first had kept the force play at second in force, and no tag was needed. Poncino changed his call after hearing Bochy’s protestations. The game was over.

“It was strange,” said Gonzalez, who tied a career high with four hits. “When Callaspo hit it, I saw Young jump and try and get away from the ball. I saw him fall, didn’t think anything of it at the time, but when Barfield’s throw was a little off line I knew I still had a shot at second.”1

Television replay showed that Greene was off the bag, and that the original safe call might have been correct. “It’s kind of the way it’s gone,” said Bochy. “Nothing is easy.”2 When the umpire finally called Young out, the crowd at Chase Field let out a loud chorus of boos as the teams left the field.

The save was Hoffman’s 482nd. Later in the day Los Angeles beat the San Francisco Giants to remain tied with San Diego. But the Padres had won the season series against the Dodgers so they won the division title for the second season in a row, and the Dodgers were the wild-card team.