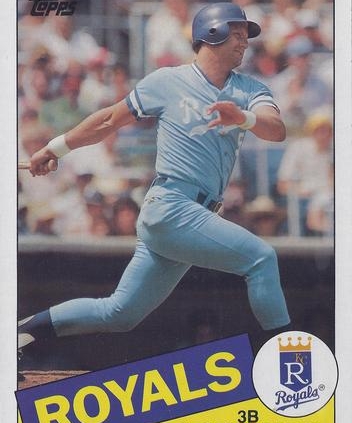 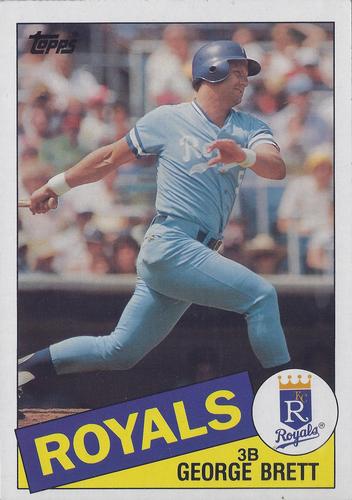 The Kansas City Royals entered Game Three of the 1985 American League Championship Series against the Toronto Blue Jays in a postseason slump. The Royals had lost 10 consecutive playoff games, including the first two games of the ALCS. The Royals lost Game One of the ALCS, 6-1. They then lost a sloppily played Game Two in 10 innings. After the heartbreaking Game Two loss, All-Star third baseman George Brett, who’d been on the team for all 10 postseason losses, remarked, “I can’t remember a loss that hurt worse than this. … It’s hard to take.”1

Even though the Royals were struggling in the playoffs, their star player wasn’t. Brett had gone 0-for-4, with a walk in Game Two, but was 3-for-4 off Blue Jays ace Dave Stieb and closer Tom Henke in Game One. He’d also helped carry the Royals into the playoffs during the final week of the regular season, going 11-for-23 (.478) with 5 home runs and 13 RBIs.

Kansas City turned to its ace for Game Three, 21-year-old hurler Bret Saberhagen, to try to stem the tide, against veteran Blue Jays right-hander Doyle Alexander. Saberhagen was coming off a tremendous regular season in which he went 20-6 with a 2.87 ERA.2 The 35-year-old Alexander was no slouch himself, having led the American League with a .739 winning percentage, while going 17-6 with a 3.13 ERA.

The Royals jumped on top in the first inning. Willie Wilson lined a single to center field with one out, but was thrown out trying to steal. On the next pitch, George Brett drove an Alexander changeup just inside the right-field foul pole to give the Royals the lead, 1-0. The home run was Brett’s seventh ALCS homer, pushing him past Reggie Jackson for most all-time.

Brett flashed the leather in the third inning. With one out, Blue Jays leadoff man Damaso Garcia doubled and went to third when Lonnie Smith misplayed the ball in left field. Lloyd Moseby then hit a screamer down the third-base line. Brett made a great backhanded stop and fired the ball off-balance to home, as Garcia raced to the plate. Brett described the play: “It was totally reaction and instinct. There was no time to think about which way to go. I just fired.”3 Catcher Jim Sundberg applied the tag on a sliding Garcia. “I thought for sure the throw was going to hit Garcia in the head,” Brett added. “It only missed by a few inches. I was thinking, my God, that’s all we needed now. … Really, it was a do-or-die play.”4 The play preserved Kansas City’s one-run lead. Brett proclaimed, “I’ve only made a play that good once before in my life.…”5 Royals manager Dick Howser added, “You’ll never see a third baseman make a better play.”6

Kansas City increased its lead in the fourth, and Brett was once again at the center of the action. He led off the inning by belting an Alexander slider just over right fielder Jesse Barfield’s glove, missing his second home run of the game by inches, as the ball hit off the top of the wall. Brett ended up at second base with a double. He eventually scored on Frank White’s sacrifice fly, on which Barfield made a terrific backhanded, sliding catch in deep right-center field.

The Blue Jays exploded for five runs in the fifth inning. Barfield drove a ball into the right-field seats for a two-run homer to tie the score, 2-2. With one out, Garcia doubled, and Moseby rocketed a ball off Saberhagen’s left heel. The ball ricocheted into left field, driving home Garcia. After a visit from the trainer, Saberhagen remained in the game, but the next batter, Rance Mulliniks, drilled an 0-and-2 pitch into the right-field seats, chasing Saberhagen from the game and extending the Blue Jays’ lead to 5-2. Bud Black relieved, but after getting the second out of the inning, he gave up back-to-back singles and a walk to load the bases.

Dick Howser turned to reliever Steve Farr to try to keep the Royals in the game. Farr had been released by Cleveland earlier in the year and signed a minor-league contract with the Royals. He’d already come in during a bases-loaded jam in Game One of the series and gave up a single, walk, and sacrifice fly, before finally settling in. This time, Farr had to face Barfield, who’d already homered in the inning. Farr retired Barfield on a sharp groundball to second baseman Frank White to end the inning.

Jim Sundberg blasted a solo home run in the bottom of the fifth to cut into the Blue Jays lead. In the sixth, Willie Wilson led off with a single, and Brett unloaded on an Alexander fastball, driving it to deep left-center field for his second home run of the game, tying the score, 5-5. The home run was Brett’s eighth League Championship Series home run, tying him with Steve Garvey for the all-time lead.7 Royals closer Dan Quisenberry said Brett’s second home run of the evening prompted catcher Jamie Quirk to tell the bullpen: “We’re in the driver’s seat now. George has one more at-bat.”8

Brett’s next at-bat led off the eighth inning. Blue Jays manager Bobby Cox decided to have Jim Clancy, a right-handed pitcher and normally a starter, face the left-handed-hitting Brett. Cox’s options were limited, as the only southpaws on the Blue Jays playoff roster were Gary Lavelle, who was suffering from a sore arm, and Jimmy Key, who would start Game Five. Coming into the at-bat, Brett was 23-for-53 (.434)  with five home runs in his career off Clancy.

Clancy was able to get Brett to squib a grounder between first and second, on what Brett called “the worst swing I’ve taken all series.”9 But the ball was just out of the reach of a diving Damaso Garcia, and went through for a hit. Hal McRae sacrificed Brett to second, and Frank White’s groundout moved him up another 90 feet. Clancy then intentionally walked Pat Sheridan to face the slumping Steve Balboni, who was 0-for-11 with four strikeouts in the series. Balboni blooped a ball into shallow center field. As three Blue Jays converged, the ball fell just out of the reach of shortstop Tony Fernandez, scoring Brett, and giving the Royals the lead, 6-5.

As the game moved to the ninth, Dick Howser decided to stick with the hot hand of Steve Farr rather than give the ball to closer Dan Quisenberry. Farr ended up facing the minimum in 4⅓ innings of relief. He allowed two singles, but they were erased on a double play and a caught stealing.

The final out of the game was appropriately hit to Brett, who squeezed a Moseby popup in foul territory to give the Royals their first win in the series and end their 10-game postseason losing streak.

Brett was surprised that Toronto continued to pitch to him: “Before the series, there was a lot of talk about how they’d pitch around me, like they did during the regular schedule when they walked me 10 times or something like that. But they’ve been coming right at me. I’m getting at least a chance.”10 Bobby Cox attempted to explain the failed strategy: “We thought we would get him out, sometime, but I guess we couldn’t, because we didn’t.”11

Brett finished the game 4-for-4, with two home runs, a double, four runs scored, three runs driven in, and a spectacular play in the third to cut down a run at the plate. Brett said, “It was an awfully good time to have my best night of the year.”12 He later called it the “best game I ever played in my life.”13

Royals outfielder Dane Iorg summed up what many players and fans were thinking after the game, saying, “The difference between us and everybody else is George Brett. … He doesn’t rise to the occasion. He’s always in a class by himself.”14

2 After the postseason, Saberhagen was named the 1985 American League Cy Young Award winner, his first of two Cy Youngs. He also won the 1985 World Series MVP, going 2-0 with a 0.50 ERA in two starts in the Series, including a shutout in Game Seven.

7 Brett finished his career with nine Championship Series home runs. As of 2018 he is tied for third with Bernie Williams, behind Manny Ramirez (13) and Albert Pujols (10).