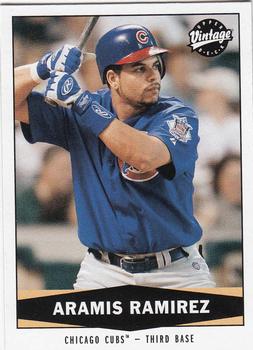 On July 23, 2003, the Chicago Cubs acquired the services of center fielder Kenny Lofton and third baseman Aramis Ramirez from the struggling Pittsburgh Pirates. The two Pirates exiles played a critical role in the Cubs’ rise to the top of the NL Central Division. In the postseason, Lofton played magnificently. He scored at least one run in six of the first eight contests. His batting average during this stretch was .389 and his OBP was .436. Lofton was the main cog in a well-run machine that propelled the Cubs to postseason success. His teammate, Aramis Ramirez, struggled throughout the first eight games of the Cubs’ playoff run, but in Game Four of the National League Championship Series against the Florida Marlins, Ramirez slammed his way into the record books and led the Cubs to within one game of clinching their first pennant since 1945.

After falling behind, two games to one, the Marlins needed a win to avoid plunging to the brink of elimination. For Game Four at Pro Player Stadium, the Marlins sent rookie sensation Dontrelle Willis to the mound. The left-hander’s 14 wins against 6 losses helped steer the Marlins to a wild-card berth and for his contributions, the 21-year-old phenom was named Rookie of the Year. Willis was no stranger to the Cubs organization. He was drafted by the Cubs in the June 2000 free-agent draft. After two seasons in the low minors, he was traded to the Marlins in March 2002. One of the Marlins sent to Chicago in the deal was right-handed pitcher Matt Clement. Clement had moved into the Cubs’ rotation, and the team handed him the ball for the crucial game four. In Game Four of the Division Series against the Atlanta Braves, Clement was the losing pitcher, giving up four earned runs, four walks, and eight hits in four innings in the 6-4 loss.

Before a crowd of 65,829, Willis walked three of the first four batters, throwing only five strikes in 19 pitches. He got two strikes on Ramirez, then fired a fastball inside only to watch Ramirez launch it into the left-field stands, the first grand slam in Cubs postseason history. The homer was Ramirez’s third of the playoffs. “I was just trying to stay alive,” he said after the game. “You don’t want to strike out. One out, bases loaded. You want to put the ball in play, and at least get one (run) in.”1

After a scoreless second inning, the Cubs added two more runs in the third when Sammy Sosa walked and Moises Alou singled to left with one out. Ramirez battled through nine pitches before grounding a single to right. Sosa scored and Alou and Ramirez took an extra base when Marlins outfielder Miguel Cabrera’s throw home got past catcher Ivan Rodriguez, who was charged with and error. Ramirez took second on the errant play. After Willis walked Eric Karros, Rick Helling replaced him and surrendered an RBI single to Cubs shortstop Alex Gonzalez, giving the Cubs a 6-0 lead.

Florida pitchers walked eight Cubs in the game. In the fourth inning Lofton drew a walk, took second on a wild pitch, and scored when Alou singled to right. It was now 7-0, Cubs.

The Cubs’ Clement faced his first taste of trouble in the Marlins’ fifth when Cabrera singled, took second on a groundout, went to third on a single by Jeff Conine, and scored on Alex Gonzalez’s chopper to short. Conine went to second and scored when pinch-hitter Todd Hollingsworth singled to center, cutting the Cubs’ lead to 7-2.

In the seventh inning, Aramis Ramirez jolted the crowd with his second home run of the night to extend the Cubs’ lead to 8-2. The Marlins got a run in the bottom of the eighth on Ivan Rodriguez’s RBI double. But reliever Kyle Farnsworth mowed down the Marlins in the ninth to preserve the 8-3 victory, giving the Chicago Cubs a commanding 3-1 lead in the series.

Clement pitched a solid game in which he gave up five hits and two walks in seven innings. Left fielder Moises Alou had two hits and an RBI. Leadoff specialist Kenny Lofton scored two runs. But the star of the night was Aramis Ramirez. His two home runs gave him four for the postseason; his six RBIs in the game tied Will Clark’s NLCS record set against the Cubs on October 4, 1989. (Enrique Hernandez of the Los Angeles Dodgers surpassed the record with seven RBIs against the Cubs on October 19, 2017.)

Despite the euphoria of many Cubs fans, there was still caution. “You’ve got to close it out,” said manager Dusty Baker. “It’s not over yet, big time. You’ve got to go out there and just win it. They’re not going to give it to us.”3

“Tomorrow we’re going to go out there and try to win,” Lofton said. “If we don’t, we still have more chances at it. We can’t look too far ahead. The game can do funny things.”4

The atmosphere in the Marlins clubhouse was equally subdued. “We’re bummed — who wouldn’t be?” reliever Chad Fox said. “But it’s the playoffs, and crazy things happen. I wouldn’t write this team off. … This team is made of heart and guts.”5

“This is when you find out what your team is made of,” catcher Mike Redmond said. “This had been a very resilient team. I expect us to get this win [the next day].”6

History was not on the side of this young Florida Marlins team. Since the inception of the best-of-seven format in 1985, only three teams had come back to win a League Championship Series after being down three games to one. Marlins manager Jack McKeon understood the odds were not in his club’s favor but as the general manager of the 1984 San Diego Padres, he watched his club win the NL pennant after being down 2-0 in a best-of-five series to a team that seemingly had destiny on their side. That team was the Chicago Cubs.

“It would be a good story,” McKeon said. “There’s no question this is a seven-game series, and this is a big challenge. But I think if you go back to the record books, there are a lot of teams that came back from three games. We’re not out.”7

In addition to the sources cited in the Notes, I also consulted Baseball-Reference.com and retrosheet.org.