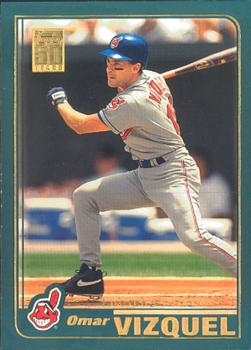 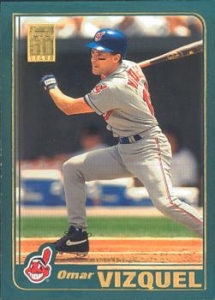 The 2001 American League Division Series between the Cleveland Indians and Seattle Mariners headed to Cleveland for Game Three tied one win apiece. The Indians won Game One, 5-0, behind Bartolo Colon’s eight shutout innings and a three-run fourth inning. The Mariners rebounded to take Game Two, highlighted by two two-run clouts in the first inning; Seattle starter Jamie Moyer, who was 2-0 against Cleveland during the regular season, earned the win on six innings of one-run ball.1

The showdown was expected to generate significant offense, as Seattle and Cleveland were the top two AL teams in team runs scored, batting average, and OPS+ that season. One widely read baseball newspaper listed the teams as owning the top two batting orders of all playoff teams.2 However, the top three batters in Cleveland’s vaunted lineup – Kenny Lofton, Omar Vizquel, and Roberto Alomar – were a combined 3-for-25 over the first two games in the series. Indians manager Charlie Manuel wasn’t concerned, commenting, “Baseball is a day-to-day thing. Just because that part of our lineup didn’t hit [Thursday] … that’s baseball. They will hit. They have hit. Right now is the time for us to hit.”3

CC Sabathia took the mound for Cleveland. Sabathia started the season with Cleveland as its number-four starter though he had never pitched a game above Double A, receiving notable support from Manuel during spring training.4 Sabathia debuted on April 8 against the Baltimore Orioles, allowing three runs in the first inning but none thereafter, and getting a no-decision. He started 33 games in his rookie campaign but had not faced Seattle during the regular season. Sabathia threw a mid-90s fastball, mid-80s curveball, and changeup.5 Before the game, Seattle manager Lou Piniella noted, “He’s got a good changeup and a real nice breaking ball. You just have to lay off it. I saw where he throws a lot of balls out of the strike zone.”6

Aaron Sele started for Seattle. A 1998 and 2000 All-Star, Sele finished 2001 with a 15-5 record and 3.60 ERA over 215 innings. The reliable innings-eater pitched exceptionally well during April and May, compiling an 8-0 record and 2.65 ERA, then going 7-5 with a more average 4.07 ERA from June onward. Sele had faced Cleveland twice during the season, allowing five runs in 6⅔ innings on August 5 and one earned run in seven innings on August 26, but didn’t factor into either decision. The control artist was known for working the corners with a high-80s fastball and overhead curve.7 Sele was looking for his first postseason win and more run support than he received during past outings.8

Seattle immediately attacked Sabathia; Ichiro Suzuki led off the first inning with a single and Mike Cameron doubled, with Suzuki advancing to third base. After Bret Boone struck out, Edgar Martinez was intentionally walked to fill the bases. John Olerud plated the game’s first run, and gave Seattle its only lead, on a bases-loaded walk. In the course of the inning Alomar offered encouraging words to Sabathia on the mound, “Everybody knows you can pitch. You’ve been doing it all year. Just settle down and throw strikes. We are going to score runs.”9 Sabathia escaped further damage after both Jay Buhner and Dan Wilson hit foul fly outs.

The Indians quickly heeded Alomar’s words: After Lofton grounded out in the home first, Vizquel singled to left field. Alomar doubled to right field, scoring Vizquel, and sped to third base on a rare throwing error by Suzuki. After he made only one error in 344 chances during the regular season and winning his first Gold Glove, Suzuki’s first postseason error led to Cleveland’s first run. Juan Gonzalez’s single provided Cleveland the lead they didn’t relinquish. Two groundouts later, the Indians led 2-1 after one inning.

In the second frame, Sabathia retired Seattle in order on two strikeouts and a groundout. Travis Fryman started the Cleveland half by reaching base on Seattle’s second error, an errant throw by Boone. Einar Diaz singled, and with two outs speedster Vizquel tripled to deep right, scoring Fryman and Diaz; Vizquel finished the 2001 season seventh in the AL with eight triples. Alomar flied out to end the inning with Cleveland up 4-1.

Sabathia settled down, inducing two groundouts and striking out Boone in the third inning. After the second, Sele was replaced by reliever Paul Abbott. Gonzalez greeted Abbott with a solo home run. Jim Thome struck out, Ellis Burkssingled, and Fryman struck out; with two outs, Abbott looked to escape further damage and give the Mariners a chance to rally from their deficit. However, Russell Branyan singled over Boone’s head, and Diaz followed with a single to score Burks. Lofton walked on five pitches, loading the bases. Vizquel’s infield single scored Branyan and Alomar’s bases-loaded walk brought in Diaz with the inning’s fourth run. Gonzalez flied out. The Indians had opened their gap to 8-1 by scoring three runs with two outs.

Seattle opened the fourth inning with two groundouts. Dan Wilson doubled to deep left field, but was thrown out at home on David Bell’s single as the aggressive baserunning backfired. The Mariners kept Cleveland scoreless for the first time in the bottom half as Abbott allowed only a leadoff single. Sabathia continued cruising, issuing a fifth-inning walk that didn’t advance; the Indians padded their lead when Lofton homered for a 9-1 tally.

In the sixth inning, Buhner was Seattle’s only baserunner, with a walk amid three groundouts as the Mariners felt the game slipping away. Thome started Cleveland’s half with a solo blast that was followed by consecutive walks to Burks and Fryman. Seattle’s John Halama replaced Abbott, and Jolbert Cabrera welcomed him by singling Burks home. Fryman advanced on a fielder’s choice and scored on Lofton’s sacrifice fly. Cleveland stranded one baserunner and now outpaced Seattle 12-1.

Seattle rallied in the seventh inning when Bell laced a leadoff double to left field and Mark McLemore walked. Suzuki singled into short center, scoring Bell and moving McLemore up. With the Indians cruising, Manuel replaced Sabathia with David Riske. Riske struck out Cameron looking, but walked Boone and loaded the bases. After Martinez delivered a deep fly out to right field, Ricardo Rincon relieved Riske. Olerud grounded out and ended the potential rally. In the bottom half, Alomar singled but Gonzalez hit into a double play. Thome struck out looking as the Mariners faced the minimum number of Cleveland batters in an inning for the first time in the game.

Manuel summoned Dave Burba to the hill for the eighth inning, and he retired Seattle in order. Jose Paniagua relieved Halama for the Mariners and induced two groundouts before control problems surfaced. Paniagua hit Cabrera, then walked Diaz and Lofton. Cleveland’s first hit off Paniagua was Vizquel’s bases-cleaning double; Alomar and Gonzalez also doubled to left field to score Vizquel and Alomar, respectively. Thome grounded out and the Indians led 17-2 heading into the ninth inning.

John Rocker closed out the ninth inning, as Cameron’s double with two outs accounted for Seattle’s only baserunner. Cleveland had recaptured the ALDS lead, two games to one. The heart of Cleveland’s offense destroyed Seattle’s pitching, as Vizquel paced the Indians with six two-out RBIs and four hits, Alomar doubled twice and drove home three runs, and Gonzalez homered during his four-hit three-RBI night. Sabathia earned his first postseason victory by allowing two runs on six hits over six innings while striking out five, though he did issue five walks. Cleveland’s bullpen allowed one hit and one walk over the final three innings.

Cleveland’s 17 runs and 19 hits remain as of 2018 the Indians’ postseason records in both categories. Sabathia rose to the occasion; before the game, he commented on Seattle’s Boone, “I’ve been trying to figure out Bret Boone. He is definitely a great hitter. He takes fastballs on the outside corner and hits them to right field, or the ball is over his head and he gets base hits.” That evening, Sabathia struck out Boone swinging three times while Boone struggled in the field.10 Piniella, who grew up as an Indians fan11 and played with the club for six games in the 1968 season before the Seattle Pilots chose him in that year’s expansion draft, was hopeful and somewhat prescient when he commented, “Maybe we tired them out and they won’t swing the bats so well (today).”12

Unfortunately for Cleveland, their offensive explosion during Game Three didn’t endure throughout the entire series. Cleveland’s bats were quieted by Seattle’s Freddy Garcia and Jamie Moyer as the Mariners won Game Four, 6-2, and Game Five, 3-1, to capture the ALDS13 as the Indians were eliminated in the first round as they were two years earlier.14 Boone praised his teammates, who had demonstrated resiliency all year long. He said, “I’ve never seen a team come to the park and put a loss behind it like I’ve seen with these guys.”15