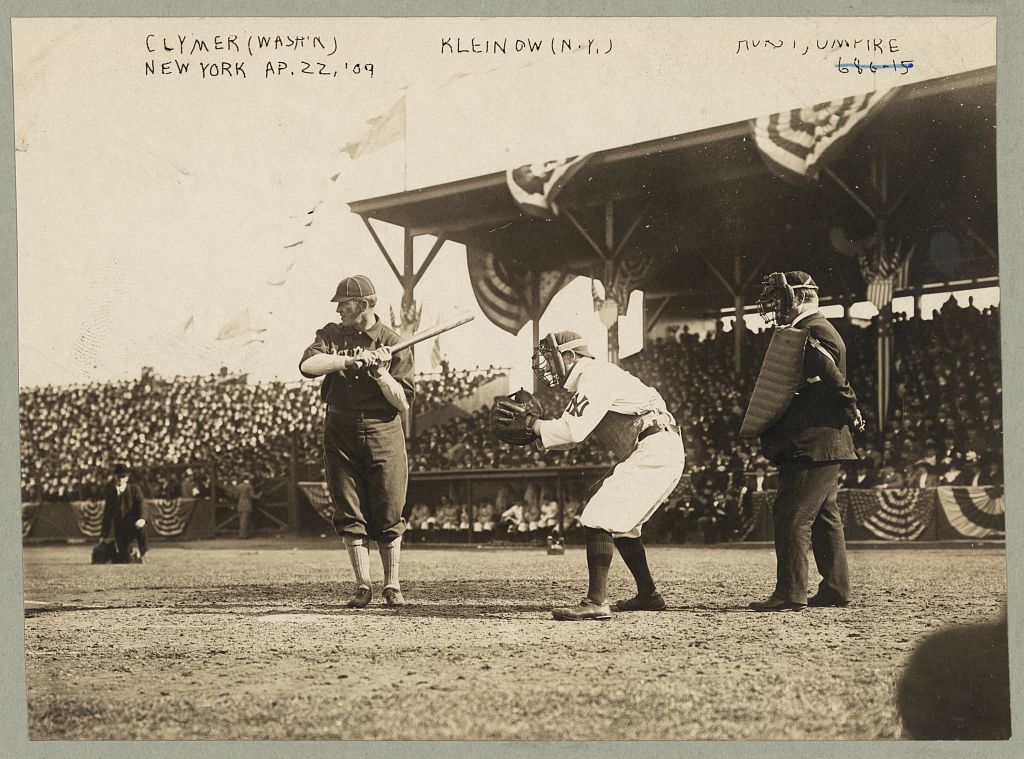 The bottom two teams in the American League met on a cold Friday in October for the second of a four-game series. The Sun of New York described the game as “one part baseball and one part freeze out.”1 The New York Times forecast a “northeast gale”2 to blow through the city. A small crowd of about 100 people braved the “cold winds which circulated around among the small settlement of huddled cranks [making] them wonder if Winter hadn’t forgotten his schedule and arrived ahead of time.”3

The 1908 Senators began the season by losing six of their first seven games, causing them to fall to eighth place in the league. They managed to climb up to seventh place but never made it higher. Coming into this contest, Washington had lost six in a row and 12 of their last 14 games. The Highlanders had spent much of May in first place and were 20-15 after the game on June 1. They then began losing large chunks of games and had taken ownership of the American League cellar on July 8. Coming into this series, they had lost eight of 10 games and had gone 28-82 since June 1.

Two right-handers were given the starting nods, each in search of his fifth win of the season. For Washington, it was rookie Burt Keeley; for the New Yorkers, it was four-year veteran Bill Hogg. Hogg had not pitched well in 1908,4 but New York manager Kid Elberfeld felt that Hogg “had another game left in him.”5 Unfortunately, according to the Washington Post, “the remainder of the baseball population doesn’t seem to agree to any huge extent.”6

Hogg managed to get through the first inning without any excitement, but in the top of the second Otis Clymer “opened the proceedings with a three bagger”7 to right field. An out later, Clymer raced home when George McBride singled to left field, giving the Senators the lead. McBride stole second and scored on Gabby Street’s single to center.

In the third, Clymer and Jerry Freeman “composed a hitting symposium which netted three runs.”8 With one out, Bob Ganley stroked a triple to right field. Bob Unglaub and Clymer then hit back-to-back singles, driving in Ganley and putting runners on the corners. With Freeman batting, Unglaub stole home. Then, according to the Washington Post, “That so disgusted one-third of the 100 spectators present that they adjourned in a body to the press box to hear the news from the game in Philadelphia.”9 (The National League’s New York Giants were playing the Philadelphia Phillies at the Baker Bowl in Philadelphia, and with only a few games left to play in the season, the Giants were in a three-way tie for first place with the Chicago Cubs and Pittsburgh Pirates.10) They missed Freeman’s single past shortstop Queenie O’Rourke that plated Clymer, increasing Washington’s lead to 5-0. Hogg then hit McBride with a pitch, and if Street had not hit into a double play, the rally could have continued.

The Senators exploded for five more tallies in the sixth. By this time rookie Joe Lake had replaced Hogg on the mound for the Highlanders, and he became the victim of the Washington offensive attack. With one out, Bill Shipke drew a walk and stole second. Keeley beat out a bunt for a single, advancing Shipke to third. With Clyde Milan batting, Keeley stole second base. Milan cracked the ball into deep right field and before New York’s Charlie Hemphill could run it down, Milan had cleared the bases with an inside-the-park home run. It was his sole home run of the season. Ganley reached first and that brought Clymer to the batter’s box. According to the Sun, “Clymer clouted to right for the entire circuit.”11 The Washington Post reported that “Clymer, with a cheerful manner in getting at the ball, walked to the plate and duplicated [Milan’s] play merely to show that it could be done.”12 New York skipper Elberfeld was reported to have yelled out of the Highlanders’ dugout, “If there are any more home runs, for the love of heaven get them off your systems so we won’t have to run into them tomorrow.”13 Sure enough, that must have worked, for both teams played a doubleheader the next day. New York took both games, 2-1 and 3-2, and the Senators did not get any home runs.

New York managed to get solo runs in each of the sixth and seventh innings, and the Washington Post reported, “What the Washington pitcher did to New York isn’t worth bothering about. New York didn’t do anything to him.”14 Keeley had limited the Highlanders to seven hits. The pitcher Lake had the big hit of the day for New York, homering in the seventh inning, becoming the third player in the game (after Milan and Clymer) to hit his first and only home run of the year.

Washington scored twice more in the ninth, and the game ended 12-2. Ollie Pickering had replaced Clymer late in the game, playing right field. The Senators smacked 19 hits against the Highlanders, prompting the Washington Post to tells its readers that “there has been no game played on the hilltop this year where the visiting team simply had no mercy on the New York pitchers.”15 Four players stole a base (Unglaub, McBride, Shipke, and the pitcher Keeley — his first and only successful swipe of his short career). Every starting player for Washington had at least one hit (in fact, every position player had at least two safeties — Keeley was 1-for-5).

During an at-bat in either the fourth or fifth inning, Clymer smacked a double, but since no runs were involved, the play-by-play (and exact inning of the key hit) did not make it into the newspaper accounts. Yet all the box scores show a double, and the double gave Clymer credit for hitting for the cycle. In his 4-for-4 performance, Washington’s right fielder had also scored three runs. His average rose to .254 (he finished the season at .253). Clymer’s home run in the sixth inning was his only round-tripper of the year. Further, it was just the second (and last) of his six-season career. Clymer had 16 extra-base hits (in 368 at-bats) in 1908, and three came in this game.

Hogg took the loss, his 16th of the season. This turned out to be Hogg’s final appearance in the big leagues. In four seasons, he had appeared in 116 games, earning a 37-50 record. Keeley picked up his fifth win (against 11 losses). He pitched in just two games in 1909 before being placed in waivers on April 21.16

The Senators-Highlanders game is part of a rare-event intersection, as Cleveland Naps hurler Addie Joss pitched a perfect game on October 2 against Big Ed Walsh and the Chicago White Sox. This is the only date in baseball history in which a batter hit for the cycle and a pitcher threw a no-hitter (in this case, a perfect game)!

Clymer was the first Washington Senators player to hit for the cycle, and he was the only player to do so in the majors in 1908. His accomplishment came 18 months after Boston’s Johnny Bates did so against the Brooklyn Superbas (April 26, 1907). It would be two more seasons before the next player attained the rare feat, when Pittsburgh’s Chief Wilson hit for the cycle against the Cincinnati Reds on July 3, 1910.

In addition to the sources mentioned in the Notes, the author consulted baseball-reference.com, mlb.com, retrosheet.org and sabr.org. Play-by-play comes from the newspaper accounts cited in the Notes.

Otis Clymer of the Washington Senators stands at the plate as New York Highlanders catcher Red Kleinow waits for the pitch on April 22, 1909. (LIBRARY OF CONGRESS, BAIN NEWS SERVICE)

10 The Giants lost to the Phillies on October 2, and the Cubs won the pennant six days later, finishing a game ahead of both the Pirates and the Giants. The Cubs and Giants had played a makeup game on October 8 after Fred Merkle allegedly failed to advance to second base on a game-winning hit in a September 23 contest. Mordecai “Three Finger” Brown beat Christy Mathewson 4-2 before an estimated crowd of 40,000. See Norm King’s account of the September 23 “Merkle Game” at the SABR Games Project.