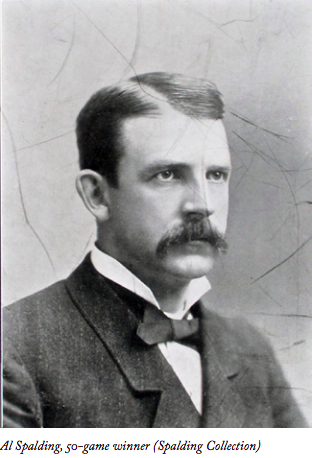 Charles “Old Hoss” Radbourn posted a 59-12 record for the National League’s Providence Grays in 1884, but that was still 10 years in the future. He’d won 48 in 1883. In his 11-year career, there were three times Radbourn won more than 30 games. Al Spalding had only a six-year career, if one excludes the 11 innings he pitched in 1877. In those six seasons, only once did he win fewer than 38 games, and that was in his first season pitching for the Boston Red Stockings, when he won 19.

Manager Harry Wright may have given it a passing thought, “Who shall I pitch against Philadelphia?” but chances are that he spent little time pondering the question. There were only three games left on the schedule and Al Spalding had already worked in 63 of the team’s 67 games.

The two teams knew each other well. They had met each other eight times, with Boston winning six of the eight contests. But both teams had also traveled to England during that midseason “break” that centered on August.

Somewhere between 800 and 1,000 spectators took in the game which began at “2½ o’clock.” Though Dave Birdsall had played for Boston the three prior years, he had not in 1874; Birdsall served as umpire.

The Bostons batted first and scored seven runs. The runs came thanks to a leadoff triple by George Wright and a single by Spalding, followed by a Deacon White single, and a Cal McVey “double-baser.” There was a home run (“a clean drive over the fence at left field”) by Jim O’Rourke, followed by another three-baser by George Wright.1 Mixed in were two Philadelphia errors. We’re not sure who reached base and who made out, nor do we know how many may have been on base when O’Rourke homered, but we do know that seven runs crossed the plate. It was written that only two of them were earned.2 The Philadelphias got no runs in the first, but scored twice in the bottom of the second.

There had been a chance for Philadelphia to break through in the second inning, when they loaded the bases on three base hits and got a run on a ball hard-hit by striker Denny Mack that was fumbled by Boston’s Harry Schafer. There was still nobody out, and Chick Fulmer at the plate. But Fulmer fouled out. The Philadelphia pitcher, Candy Cummings, singled to center, driving in the second run, but McVey’s throw from center field to Deacon White at the plate cut down Tom York, who’d tried to score, and the threat was over.

Boston replied with two more of its own in the third, re-establishing the seven-run cushion.

While Philadelphia didn’t score again until once in the seventh, Boston added one run in the fourth, two more in the fifth, and its 13th run in the top of the seventh. With the score 13-3 after eight, the Red Stockings added two more in their half of the ninth. Philadelphia scored no more. The final was 15-3, Boston, and Al Spalding recorded his 50th win of the season. It was already late October, and there was to be no baseball in November, but Spalding added two more wins on the following two days, only to lose his final decision of the year on October 30. His record was 52-16. He’d just turned 23 in early September.

Much of the scoring was due to differences in fielding. Boston committed seven errors in total, but Philadelphia shortstop Jim Holdsworth made six by himself, and the catcher, Nat Hicks, made four more. All told, Philadelphia was charged with 16 errors.3

Despite the disparity in scoring, and the relative ineptness of Philadelphia’s fielding, the Boston Daily Advertiser‘s front-page account allowed that the lead “did not appear to discourage the visitors, and all of them, excepting Cummings, who acted as if he was either sick or sulky, played with vigor and pluck.”4

At the beginning of the sixth inning, Cummings left the game and George Bechtel came in from right field to pitch, with Pete Donnelly taking over right field. Bechtel only allowed four (or maybe three) hits in the final four innings.

The Boston Globe enthused about the weather, but said the game itself “was not remarkable in any one particular, but several brilliant plays were made.”5 The Boston papers all noted the one-handed catch the Red Stockings’ Tommy Beals made, running deeper into right field to haul in the ball and them tumbling into a “heels over head” somersault with the ball firmly in hand. Philadelphia’s York also made a “beautiful running catch” and their first baseman Mack was singled out for his good fielding.

None of the coverage, which included the Boston Journal, noted that Spalding had won his 50th game of the season. It was one of the 65 complete regular-season games he threw in 1874.

After the game, both teams attended the performance at the Boston Theatre, by invitation of the management.

Numerous contemporary newspapers were consulted to prepare this account. Bob LeMoine checked the Philadelphia Inquirer, which appears to have devoted only one line to the game.

3 The Boston Globe account says that Boston committed seven errors, and Philadelphia committed 16. The Advertiser, which sometimes had better baseball coverage at the time, agrees that Boston was charged with seven, but ascribed 20 to Philadelphia. We have simply gone with the more conservative figure here.