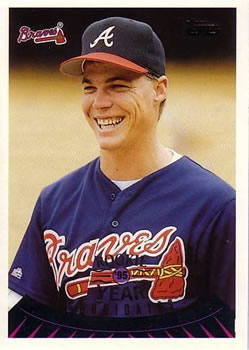 The first National League Division Series in major-league history got underway in Denver on October 3, 1995. Unlike the Conference Series and the World Series, the NLDS was a five-game series.1 The Rockies, in just their third year of existence, were hosting the Braves. Colorado had played hard to the end of the season, finishing the year at 77-67, just one game behind the Dodgers in the NL West. The Braves had coasted to the end of the season. They clinched the NL East Division on September 13, finishing with a 90-54 record, 21 games ahead of the Mets.

Greg Maddux pitched for the Braves. He had not pitched in Denver in 1995 although he had pitched there in 1993 and 1994. Pitching in Denver is challenging since pitches move (or don’t move) differently in the mile-high air. Maddux finished the regular season with a major-league-leading 19-2 record and 1.63 ERA. However, one of those losses was his only game against the Rockies (May 17), one of his worst games of the year.

The Rockies sent Kevin Ritz to the mound. His regular-season stats were pedestrian: 11-11 record, 4.21 ERA. However, he had pitched four perfect relief innings against the Braves on September 12.

The game started with Marquis Grissom fouling off several pitches, then grounding out to the shortstop. Mark Lemke lined into right for a single. Chipper Jones, the Atlanta rookie third baseman, was up next. Unlike the other regulars, Atlanta manager Bobby Cox had kept Chipper playing after September 13 to keep him sharp. This was his first postseason appearance. It was not particularly impressive: He grounded into a double play to end the top of the first.

The top of the second started normally enough: Fred McGriff grounded out to third, then David Justice singled into center. Ryan Klesko hit a dribbler toward the pitcher. Ritz’s throw went by first baseman Andrés Galarraga as Klesko ran past first. Galarraga retrieved the ball and tagged Klesko, who was called out by first-base umpire Jerry Layne. Klesko had not made an obvious turn toward second: He had barely kicked up some chalk dust running past the bag. Cox came out to “state his case” to Layne rather vociferously, but avoided getting tossed. Justice had advanced to third on the bad throw but was left there when Charlie O’Brien grounded out.

The bottom of the second was over on seven pitches. Galarraga grounded out, then Ellis Burks singled but was erased when Vinny Castilla grounded into a double play.

The Braves got on the board first: After Jeff Blauser and Maddux grounded out, Grissom hit a hanging slider just over the fence in center, 415 feet from home plate. Lemke flied out with the score 1-0, Atlanta.

Walt Weiss opened the bottom of the third by tapping back to Maddux, who bobbled the ball but got the out at first. Ritz (.188 BA) hit a slow roller toward second, almost beating the throw. Young hit a standup double into center past the diving center fielder. O’Brien paid a visit to the mound, perhaps just to give his pitcher a break: Maddux hadn’t had a strikeout yet, unusual for a pitcher with a 7.8K/9 ratio in the regular season. Girardi battled but grounded to first to end the inning.

The Braves threatened again in the top of the fourth. Chipper lined out, but a single by McGriff and a walk to Justice put two on with one out. But Ritz struck out Klesko and O’Brien to end the threat.

The Rockies took the lead in the bottom of the fourth. Bichette grounded out, Walker walked. Galarraga’s single sent Walker to third, then Burks’s sacrifice fly brought him home (although he had to jump over the catcher after touching home plate to avoid a collision). Castilla then homered: 3-1, Rockies. Weiss flied out to end the inning.

Blauser opened the fifth with a strikeout. Maddux’s hit deflected off third baseman Castilla’s glove — right to shortstop Weiss, who made the throw in time for the out. Grissom grounded to Castilla, who couldn’t handle the ball: He didn’t even try a throw. Ritz tried several times to pick Grissom off but to no avail: Grissom probably had second stolen, but Lemke was caught looking for the third out. In the bottom of the fifth, Maddux allowed a single to Young, who was then erased on a double play.

Chipper hit Ritz’s first pitch in the sixth for a home run. After McGriff flied out, Justice walked. Klesko singled and Burks misplayed the ball, allowing Justice to take third. With Ritz at 102 pitches, Rockies manager Don Baylor changed pitchers to side-arming Steve Reed. Luis Polonia hit a groundball toward third: The Rockies got the force out at second but couldn’t turn a double play as the ball was hit too slowly. With Blauser batting, Polonia stole second, then took third on a bad throw by Girardi. After two more pitches, the Rockies intentionally walked Blauser to pitch to Maddux. The strategy worked as he struck out with the score tied, 3-3.

In the bottom of the sixth, the Rockies got two singles, but one was erased on a double play and the other was left on base when Burks grounded out.

Reed continued pitching the seventh. Grissom was credited with a double when center fielder Burks dived but couldn’t hold the ball. Lemke bunted up the third-base line. Reed grabbed the ball and got the out at third. That was all for Reed. He gave way to Bruce Ruffin, who got Chipper to ground into another double play.

Castilla also opened the home half of the seventh by doubling into center. He was replaced by pinch-runner Trent Hubbard. Maddux hit Weis with the first pitch. Pinch-hitter Jason Bates was ruled not to have been hit by the pitch while bunting, although the slow-motion replay showed the ball hitting his hand. He grounded out, advancing the runners. Atlanta intentionally walked Young. Pinch-hitter John Vander Wal tapped back to the mound: Atlanta was able to get a “home and first” double play to end the inning and keep the score tied. That ended Maddux’s night at 85 pitches with no strikeouts, somewhat unusual for him. During the last two innings the Colorado mascot, Dinger, had been bouncing up and down behind home plate doing his best (worst?) to distract the pitcher.

Mike Munoz took over the pitching for Colorado in the top of the eighth. He got McGriff and Justice out, but then was replaced by Darren Holmes after Klesko singled. Javy López and pinch-hitter Dwight Smith both singled as well, scoring Klesko: 4-3, Atlanta. Another pinch-hitter, Mike Devereaux, flied out to center.

Atlanta’s new pitcher, Greg McMichael, started by walking Bichette. Walker singled to right. Bichette took third when right fielder Justice bobbled the ball. Galarraga’s hit down the third-base line was grabbed by a diving Chipper, who got the force out at second. Atlanta’s next pitcher, Alejandro Peña, gave up a double to Burks on the first pitch, tying the game at 4-4. After Jayhawk Owens struck out, Weiss was intentionally walked to load the bases. Bates battled but flied out to end the eighth with the score still tied.

Curtis Leskanic started out well in the top of the ninth, getting Grissom and Lemke to ground out. Chipper took two balls, then hit his second homer of the game. McGriff struck out but the damage had been done: Atlanta led, 5-4.

Mark Wohlers, with his 100-MPH-plus pitches, took the mound for Atlanta. Young grounded out, then Mike Kingery and Bichette singled. Walker walked to load the bases. Galarraga struck out (not surprising since he led the league in strikeouts). With all the pitching changes and double switches, Colorado found itself out of bench players so sent Lance Painter,2 a relief pitcher, to the plate. As might be expected from a player with four strikeouts in nine at-bats for the year, he struck out to end the game.

Chipper Jones, just beginning his Hall of Fame career, was the hero of the night for Atlanta on both offense and defense despite grounding into two double plays. Greg Maddux, even without having his usual swing-and-miss stuff in this game, went on to postseason success3 — and the Hall of Fame.

The Rockies’ postseason ended quickly: they won only one NLDS game, in Atlanta. Atlanta went on to beat the Cleveland Indians in the World Series in six games.

In addition to the source cited in the Notes, the author consulted the recorded game on YouTube: youtube.com/watch?v=JymlAJarzB8, as well as Baseball-Reference.com and Retrosheet.org.

1 Not everyone was a fan of the shorter series format. Braves GM John Schuerholz and manager Bobby Cox both wanted a seven-game series. Tim Tucker, “Baseball is better suited to a best-of-seven playoffs,” Atlanta Constitution, October 4, 1995: D5.