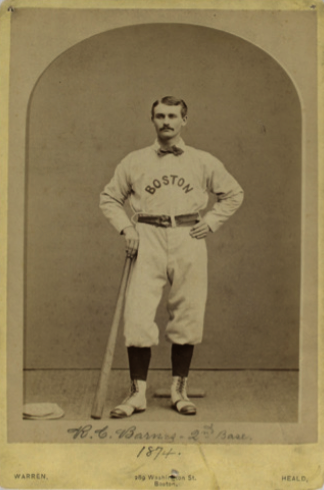 The final day of the 1875 base ball season was one of those rare occasions when the weather matched the mood, not just of the game, but of the entire season. Conditions at the Boston Red Stockings’ grounds on the next to the last day of October were described by the Boston Evening Journal as “cold and cheerless,” “raw,” and “disagreeable,” reason enough to limit the crowd to a “few hundred spectators.”1 The dismal weather, however, was not the only reason the Red Stockings faithful found something else to do on that gray Saturday afternoon. After all, the weather wasn’t that much better the day before when the Boston and Hartford clubs played the first of a home-and-home set in the Connecticut capital, but with a crowd estimated at 2,000 in attendance. The Connecticut fans were rewarded for their perseverance, witnessing a come-from-behind 9-8 win, the home team’s first win in nine outings against the Red Stockings.2 Hartford’s lack of success against the defending National Association champions was hardly unique and that too helped explain the lack of excitement and energy at the next day’s match in Boston.

The winners of three straight National Association championships, the Red Stockings had been so dominant in 1875 that the pennant race was effectively over in June. That made the final game the last of a string of meaningless games that had lasted three months. A championship team closing out its season at home might still have been cause for a communitywide celebration, but this was a bitter championship for Red Stockings fans. Back in July, long before such matters were usually resolved, word came out that four of Boston’s stars — Deacon White, Cal McVey, Ross Barnes, and pitcher Albert Spalding — had signed their 1876 contracts not with Boston, but to play in Chicago. Continually seeing or reading about the exploits of their soon-to-be-former players could only serve as a reminder to fans of what they were about to lose. So the combination of bad weather, another unimportant game, and a final painful reminder of a far less bright future was more than enough to keep most Red Stockings fans at home or work.3

The game had equally little meaning to the players who at the end of another long season were playing back-to-back games in two cities. Once the October 29 game was called for darkness in the top of the eighth, the two clubs made for the train station and the uncomfortable overnight trip to Boston. With its come-from-behind win, the Hartford club had capped off a good season. After an unsuccessful inaugural campaign in 1874, Hartford still had enough of its startup funding left to acquire veteran players like Jack Burdock and Jack Remsen of the New York Mutuals and Bob Ferguson and Tommy Bond of the Atlantics. Regardless of the outcome of the final act, the Hartford players and their fans had enjoyed 54 victories and a second-place finish. Whether it was because of the much smaller rosters of the day or the desire to give the Boston fans one last chance to see their heroes, Harry Wright and his club opted to play their regular lineup. Although doubtless well intentioned, little came of the move as the game was dismissed by the Boston papers as “devoid of interest.”4

Based on the surviving box scores, the game was no classic, with both teams reaching double figures in errors. One run that was definitely earned was a home run by Boston’s Ross Barnes, which cleared the left-field fence. Boston got off to an early 5-1 lead, added two more in the sixth, and held on for a 7-4 victory in a game called after eight innings. Hartford’s last three runs came in their last at-bat, but the Globe, apparently unwilling to allow the visitors even a modicum of respect, dismissed the three tallies as scored “in the dark.”5 The Hartford Courant, on the other hand, proudly noted that the local club had outhit the champions, 14-10, and attributed the loss to “poor base running” and “errors.”6 Baserunning blunders may have indeed been significant as Hartford reportedly had two runners thrown out at the plate.7 Eight innings were apparently enough for a game that marked Boston’s 71st win, 54 of which were credited to the strong right arm of Albert Spalding. Hartford ended the season with only one win in 10 tries against Boston, due in large measure to the Dark Blues’ anemic .205 team batting average in those 10 games.8

Hartford was not alone, however, in faring poorly against the Red Stockings. Boston’s record against the six teams immediately below them in the standings was a resounding 48-7. None of this was surprising, given Spalding’s 54-5 record with a 1.59 ERA, not to mention a batting order with six hitters over .300 and a team batting average of .321.

It’s no wonder Boston finished the season with a 71-8-3 record, 18½ games ahead of a Hartford club that had a solid .659 winning percentage of its own. Also not surprisingly, a league so dominated by one team was not a healthy one, to the point that only five teams finished the season. A perceptive observer attending the final game or even reading about it in the newspaper might have wondered if the National Association would survive. Any such ponderings would prove prophetic when William Hulbert of the Association’s Chicago club took not only Boston’s four stars, but the five surviving Association franchises into the new National League. Throughout almost all of the National Association’s brief existence, the Boston Red Stockings had been the league’s most dominant team and while their last game was no classic, it was fitting that Boston won the Association’s not so grand finale.