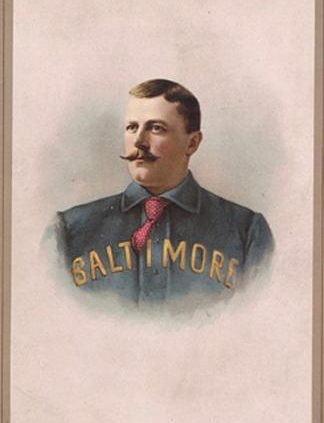 “Three games they lost for the Temple Cup;
Three games right at the start;
So Tebeau leaves with a pain in his back
And another in his heart.

Oh, where is Cleveland’s pennant pole?
In the town of the oyster stew.
And where is the blooming Temple Cup?
I’m afraid they’ll get that too.”1 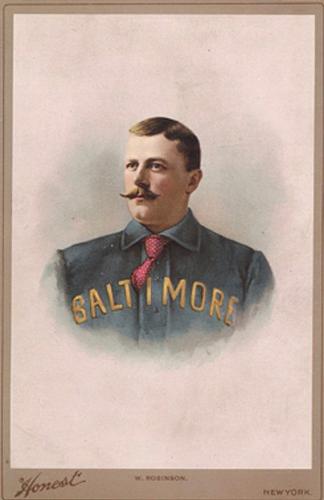 The Baltimore Orioles (90-39) of 1896 had finished first for the third straight year, previously having topped the National League in 1894 and 1895. But after losing the Temple Cup the last two seasons to the second-place teams, New York and Cleveland, they were poised for a much-needed victory in the competition for the Cup.

The Baltimore Orioles of the late nineteenth century were the dominating force in the National League. Baltimore was led by Ned Hanlon , a “short, stout manager who sat on the Orioles bench in a three-button Victorian suit.”2 Foxy Ned, as he was sometimes known, had just won the third of his five championships in a Hall of Fame career. The ’96 Orioles were also led by five other future Hall of Famers: John McGraw at third, Hughie Jennings at short, Willie Keeler in right, Joe Kelley in left, and Wilbert Robinson behind the plate. It is no wonder that Hanlon and his boys are credited with perfecting the hit-and-run, bunting, the sacrifice, and the Baltimore chop, what came to be known as “inside baseball.”3

The 1896 Cleveland Spiders (80-48), led by player-manager Oliver “Patsy” Tebeau , had finished second behind the overpowering Orioles. They had also finished second to Orioles in 1895, but had triumphed over Baltimore in the Cup series, and were not looking to relinquish what had “soothed the ruffled spirits of Tebeau when he thought of the pennant.”4 The Spiders were stacked with talented players, among them Cy Young , Nig Cuppy , Chief Zimmer , and Jesse Burkett . Although in the shadow of the Orioles, as was the rest of the professional baseball at that time, the Clevelanders were no slouches.

Game Three of the Temple Cup took place on October 5, 1896, before a less-than-impressive crowd of 2,000. The interest in the Temple Cup had begun to lessen at this point and the turnout at Baltimore’s Union Park was disappointing. Union Park was “fancier than most, a double-decked, 8,000 seat wooded stadium with a beer garden, picnic grounds and ladies grandstand.”5

In the box for the Orioles was Bill Hoffer , who was coming off of a splendid season with a 25-7 record and a 3.38 ERA. Although he was pitching on just two days’ rest – he had started in Game One of the series on Friday – and “had trouble in the earlier innings making his balls ‘break’ just right,”6 he persisted and at “the proper moment, Hoffer became invincible.”7

Pitching for the Spiders was Nig Cuppy, who had finished the season with a 25-14 record and a 3.12 ERA. He was the number-two starter for the Spiders behind Cy Young but was every bit as capable as the famous Cy.

The Orioles were the first to strike, in the bottom of the second. Cuppy had retired McGraw, Keeler, and Jennings in order in the first. Leading off the second for Baltimore was Joe Kelley, who topped the National League with 87 stolen bases in 1896.8 He singled and was forced out at second on a groundball by Jack Doyle , the Orioles’ first baseman. Doyle then stole second and was driven in by center fielder Steve Brodie . Brodie was the Cal Ripken of his day. He holds the nineteenth-century record for consecutive games played (727).9 Cuppy then retired Baltimore catcher Robinson to put a stop to the blossoming rally.

The Orioles jumped ahead in the bottom of the third. Hoffer helped his own cause by driving a triple past the scrambling Cleveland outfielders. Then he capitalized on a fly ball and “a poor throw by Burkett, which allowed Hoffer to score.”11 But Baltimore didn’t hold the lead for long. In the top of the fifth inning, the Spiders took advantage of the only walk of the game and drove home another run on two singles.

Baltimore retook the lead in the bottom of the sixth. The pugnacious John McGraw manufactured a one-man rally. He led off the inning with a single off Cuppy, stole second, and went to third on a throwing error by catcher Zimmer. McGraw finally let someone else on the Orioles help with a fly ball. McGraw scored and Baltimore wouldn’t lose the lead again.

Cleveland pitcher Cuppy “pitched a brilliant game up to the eighth inning, when the champions fell on him for three singles and a double.”12 Catcher Wilbert Robinson, who hit .312 over seven seasons with the Orioles,13 started the rally with a double. McGraw’s single drove in Robinson. Then McGraw stole second and was driven in on a single by Keeler, who in turn was then driven in by Kelley’s single. The three runs seemed to seal the Spiders’ fate. They left nine men on base in the game.

Besides the sources cited in the Notes, the author consulted Baseball-Reference.com, the SABR Biography Project, and the following: