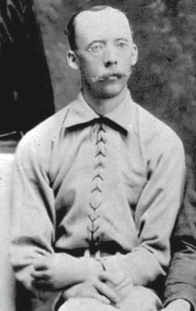 It’s hard to imagine big-league baseball without a series at the end of the season that decides which team claims the title of “World Champion.” But in the early years of major-league baseball there was only one league, and winning the pennant was the crowning achievement. From 1876 to 1881 the National League reigned as the baseball world’s lone major league.

Cincinnati had been represented in the National League from 1876 until 1880. But the league’s rules banning beer sales and prohibiting Sunday games were both sore points in that city. When Red Stockings ownership decided to ignore those prohibitions late in the 1880 season, the club’s franchise was unceremoniously terminated for 1881.

Cincinnati sportswriter O.P. Caylor, angry at what he considered the National League’s arrogance, made a push to bring major-league baseball back to Cincinnati for the 1882 season. He and businessmen from other baseball-deprived cities organized a new major league. The newly formed American Association fielded teams from six cities in its first year: Baltimore, Louisville, Pittsburgh, St. Louis, Philadelphia, and Cincinnati.

The new Cincinnati team was guided by veteran player and rookie manager Pop Snyder. His band of warriors consisted of a healthy mix of veterans and prospects. A handful were familiar faces to Cincinnati cranks. Among those were third baseman Hick Carpenter, pitcher Will White, and outfielders   Happy Wheeler and Joe Sommer. All four had played for the National League Reds and were fan favorites. Also on the team was rookie sensation and eventual Hall of Famer John Alexander “Bid” McPhee. Snyder guided his club to a 55–25 record, good for the Association’s first pennant, finishing a commanding 11½ games ahead of the second-place Athletics.

Meanwhile, in the National League the mighty Chicago White Stockings captured their third straight pennant, finishing the season with a 55– 29 record. The Chicagos were at the peak of their championship run and were loaded with plenty of baseball studs, among them Hall of Famers Cap Anson and   Mike Kelly.

At the conclusion of the season the White Stockings and Red Stockings agreed to face each other in exhibition games, the first time in major-league baseball that two pennant winners would meet.

The first of the historic games took place on October 6 at Cincinnati’s Bank Street Grounds. Both Anson and Snyder penciled in most of their starters. Snyder excluded himself because he was nursing a sore finger. Phil Powers took over the catching duties. For the Chicagos, Kelly, oddly missing from his usual place in the lineup, was replaced by pitcher  Larry Corcoran.

The game began shortly after 3 o’clock with 2,700 fans on hand to witness a match full of base hits and exciting defense. Both pitchers hurled great games. The only scoring happened during the sixth inning and, to Chicago’s horror, it all belonged to Cincinnati. After the White Stockings successfully retired Wheeler, Carpenter nailed a line drive to center, Ecky Stearns hit safely to right, and Chick Fulmer singled to center field, sending Carpenter home with the game’s first run. McPhee, the “handsome gentlemanly second baseman,”1 slapped a triple, sending the ball between right fielder Hugh Nicol and center fielder George Gore, scoring both Stearns and Fulmer. Chicago’s Fred Goldsmith then threw a wild pitch that sent Biddy home for the final run of the inning and the game. 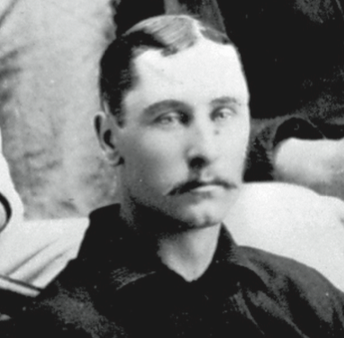 The Red Stockings’ Will White held the Chicagos, who had averaged seven runs per game during the season, scoreless. In those days a shutout ballgame was referred to as a “Chicago,” an irony that Anson desperately hoped to avoid as the final inning began.

Abner Dalrymple opened that last inning by scratching out a hit to left field. Gore popped out to Wheeler in right before Ed Williamson doubled to right-center. With only one out and runners at second and third, Anson himself stepped up to the plate. But he failed to deliver, hitting a shot that was caught by center fielder Jimmy Macullar. Dalrymple tried to hustle home from third but was caught by Macullar’s brilliant throw to catcher Powers for the final out.

Red Stockings fans celebrated with a great cheer, “All yell, and let it be a champion whoop!”2 for their new baseball club had defeated the champions of the league that snubbed them exactly two years before. The Cincinnati Enquirer reported that Anson “looked as glum as a jilted lover.”

Despite the loss in the follow-up game, Cincinnati fans still rejoiced. Their Red Stockings had competed with the best that the National League had to offer. 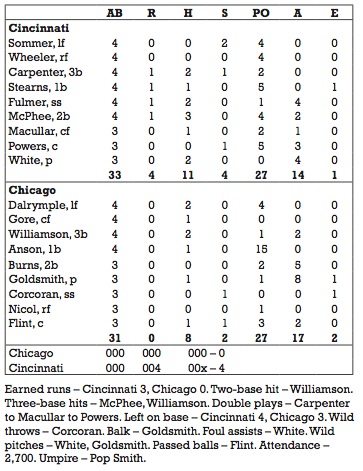