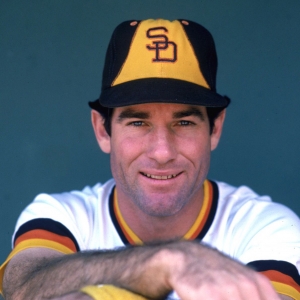 A headline in one newspaper said, “Padres Go With Lollar, a Questionable Starter.”1

The writer said, “An entire San Diego Padre season rests this evening on the left shoulder of pitcher Tim Lollar. And the shoulder has been a sore spot lately.”2

Williams’s plan was that everyone but Eric Show, who was scheduled to be the Game Five starter, and Ed Whitson, who had pitched eight innings in Game Three, would be available in relief of Lollar.

Frey was going with Scott Sanderson, who had spent 21 days on the disabled list after recurring back spasms earlier in the season, instead of going with ace Rick Sutcliffe on three days’ rest. Sutcliffe, who had pitched seven innings the Cubs’ 13-0 victory in Game One, had gone 16-1 in the regular season after joining the Cubs in June. Sanderson was 8-5 with a 3.14 ERA in 24 starts, but had won just two of his last 10 starts. He had pitched five shutout innings in the Cubs’ regular-season finale on September 30.

“I didn’t want to move (Sutcliffe) out of his normal routine,” Frey explained. “I want to give him his full rest so he’ll have the best chance to do his best. I want all the conditions right for him.”3

Game Four was an important one for both franchises.

The Padres, making their inaugural playoff appearance in their 16th season of existence, had lost the first two games of the series, 13-0 and 4-2, in Chicago. After avoiding a sweep with a 7-1 victory over the Cubs in Game Three in San Diego, the Padres were trying to prevent their first foray into the postseason from being brief.

The Cubs were trying to get to the World Series for the first time since 1945. They hadn’t won a World Series since 1908.

The Padres staked Lollar to a 2-0 lead with two runs — on a sacrifice fly by Tony Gwynn and an RBI double by Steve Garvey — in the bottom of the third inning.

The Cubs rallied for three runs off Lollar in the top of the fourth. Lollar walked Gary Matthews, then Jody Davis, and Leon Durham hit back-to-back home runs to give the Cubs a 3-2 lead.

Neither Lollar nor Sanderson made it out of the fifth inning. After retiring the first batter in the top of the fifth, Lollar walked the next two and was replaced by Andy Hawkins. Hawkins got a double play to end the threat.

In the bottom of the fifth, Garvey’s single off Sanderson tied the score and ended Sanderson’s outing.

Garvey’s single off reliever Tim Stoddard in the seventh inning came after an intentional walk to Gwynn. Gwynn eventually scored on a passed ball to make it 5-3.

The Cubs got those two runs back in the eighth inning — on an RBI single by Keith Moreland and a double by Davis off Goose Gossage — to tie the score, 5-5.

The Cubs then threatened in the top of the ninth. With one out, Bobby Dernier doubled down the left-field line and stayed at second when Ryne Sandberg popped to third. Craig Lefferts intentionally walked Matthews to get to Henry Cotto, a rookie who had hit .274 in 105 games and 146 at-bats during the regular season. (Cotto had pinch-run for Moreland in the eighth inning.)

The strategy backfired when Lefferts hit Cotto with a pitch to load the bases. But Ron Cey grounded out to second baseman Alan Wiggins to end the inning.

With one out in the bottom of the ninth, Gwynn singled to center. Garvey, who was the only Padre with more than 75 RBIs during the regular season (he had 86), then hit Lee Smith’s 1-and-0 fastball into the right-field stands.

“He’s a great clutch hitter, what else can you do?” Jody Davis said of Garvey. “We had our best reliever and we gave him our best pitch. He just beat us tonight, and there’s no second-guessing around here.”4

“I don’t want to say I told you so,” Bevacqua said, “but I told people before the series: Watch Gary Matthews and watch Garvey. Why? Because that’s him. He’s been a great clutch performer all these years and he’s going to do it for a lot of years to come.”5

The 35-year-old Garvey, in his second season with the Padres after playing on four World Series teams with the Los Angeles Dodgers, had rescued the Padres with a historic day. The home run, his fourth hit of the game, gave him a playoff-record-tying five RBIs. Each of his first three hits came with two outs.

Williams, in his 17th season as a major-league manager, said, “No question, it was the greatest playoff game I’ve ever been associated with, or World Series. I had (Carl) Yastrzemski when he was MVP in 1967 and I’ve never watched a player have a year like he had, but I don’t recall him ever having a day like Steve did today. It was utterly fantastic.”6

For Garvey, the game-winning home run was rarity after a regular season that saw him hit just 8 home runs in 161 games and 617 at-bats. Garvey, who had averaged a little over 20 home runs in his final nine seasons with the Dodgers, had hit just three home runs after the All-Star break and none in the Padres’ final 43 regular-season games. The home run was his first since August 15.

“I’ve thought about why,” Garvey said. “I get myself up for these moments. I look at the statistics and it gives me a lot of satisfaction.”7

The next day, in Game Five, Garvey went 1-for-3 and drove in a run as the Padres beat the Cubs, 6-3, to earn their first World Series berth. The Padres became the first NL team to win a playoff series after trailing 2-0 in the series.