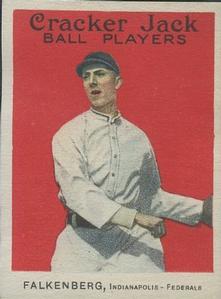 Only the tail-end St. Louis club stood in the way of Bill Phillips’s second straight Federal League pennant. The Indianapolis Hoosiers (or Hoofeds) had easily paced the six-team circuit in 1913, but the league then expanded to eight clubs and competition had been much tougher the next season. The Hoofeds dueled with Chicago and Baltimore throughout the summer and the race was tight going into the final week. The Terrapins had a mathematical chance at the title, depending on a pair of Indianapolis losses and eight straight victories in their remaining games, but the chief threat was Chicago. The Chifeds had just dropped a crucial doubleheader to Kansas City, but if they defeated the Packers in their remaining two games and the Hoofeds dropped a pair to St. Louis, the pennant would fly in the Windy City.1

Despite having some margin for error, Phillips took no chances and sent his ace to the mound on Thursday, October 7. Frederick Peter Falkenberg was known to the baseball world as Cy and had been the class of the Federal League in 1914. His early major-league career had been undistinguished until a spectacular 1913, when he posted a 23-10 record along with a 2.22 ERA for Cleveland. This 7.3-WAR season made him a prize catch for the Federals and he quickly maintained his newfound stardom. Falkenberg finished with 25 wins and paced the league in starts, shutouts, innings pitched, and strikeouts. Other than 10 appearances with the 1903 Pirates, he had toiled with bad or mediocre clubs in Washington and Cleveland. This was his chance to head a pennant winner and he did not waste it.

Last-place St. Louis had fallen, 7-4, to the Hoofeds the previous day and manager Fielder Jones started Dave Davenport. The big right-hander had jumped from Cincinnati earlier in the year and could throw hard but had control problems. He was second on the Terriers in strikeouts and led them in bases on balls, and this game’s performance illustrated those characteristics. Over the course of the game Davenport struck out five, walked five, hit a batter, and threw a wild pitch. Falkenberg, in contrast, was magnificent. Pitching for unaccustomed high stakes, he allowed only three hits while striking out eight and walking just a single batter.

After Falkenberg retired the side in order in the first, the Indianapolis hitters struck right away as the Terriers exhibited the sloppy play of a losing club. Vin Campbell bunted in front of the plate and Harry Chapman fielded it but sailed the ball over the head of Hughie Miller at first base. The ball rolled down the right-field line of Federal League Park and Jack Tobin scooped it up and fired it toward third but it hit umpire Ed Goeckel and bounded away. Campbell never stopped running and gave the home nine a 1-0 lead on his “Little League home run.”2

Davenport got Bill McKechnie to pop out to the catcher but Benny Kauff “punched one to the scoreboard for two bases.”3 When Frank LaPorte hit a dribbler to short and beat John Misse’s throw to first, Kauff rounded third and never stopped as he slid around Chapman’s tag for the second run. Falkenberg did not need any further support as he made quick work of the Sloufeds. Indianapolis tacked on a pair of runs on a wild pitch and a sacrifice fly in the sixth and took a 4-0 lead into the final frame, at which point Fielder Jones pulled out all the stops to spoil the party.

In a time of small rosters and infrequent substitutions, the St. Louis manager sent three pinch-hitters to the plate. First, Ward Miller batted for Al Boucher and drove the ball safely to right field for the team’s second hit of the day. Next, Doc Crandall went up for Davenport and beat out a dribbler that did not leave the infield. Perhaps Falkenberg was tired after throwing over 330 innings over the course of the season, but he rallied to retire Tobin on a fly to center. Jones then inserted himself for Misse with the same result. When Delos Drake lofted a high foul behind the plate, catcher Bill Rariden gathered it in for the final out to give Indianapolis the pennant.

The Hoofeds and their manager were the toast of the town, congratulated by fans and feted by local business leaders. “They had not counted on the long experience of Bill Phillips – they did not know his success in handling players, his wonderful ability to get every ounce of play out of every situation,” gloated the Indianapolis Star.4 It was a heady time for the locals but their challenge to the World Series champion Boston Braves went unanswered and there would be no third straight pennant. Despite its success, the team was relocated to Newark for 1915 season and Phillips would be fired during a fifth-place campaign. Federal League Park was razed in 1917 and only memories of two magical championship seasons remained for Hoofed fans.5

In addition to the sources cited in the Notes, the author relied on retrosheet.org.

1 “One More Victory and Bill Phillips Will Have Brought Another Pennant to Fans of Indianapolis,” Indianapolis Star, October 7, 1914.

2 Little League itself was not founded until 1939 but the phrase has caught on to describe home runs of this type. SABR maintains a database of such plays retroactive to 1911. See sabr.org/little-league-home-runs.

5 “Traction Freighthouses and Yards Proposed in South Street Will Aid in the Centralization of the City’s Shipping Facilities,” Indianapolis News, January 27, 1917.