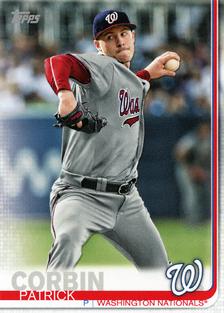 It was a beautiful Sunday afternoon in Washington, DC. Many families were at the park during the Labor Day holiday weekend, including those staying for the postgame “Kids Run the Bases” opportunity.

Patrick Corbin (10-6, 3.15 ERA) hoped to pitch the Nationals (76-58) to a three-game sweep of the Marlins (48-87). The odds were good: Corbin had beaten them twice already in 2019, including a complete-game shutout on May 25.1 Suffering through a 14-game road losing streak,2 the Marlins held down the bottom of the NL East, 34 games back of the Braves. The Nationals, in second place and 5½ games back, still had hopes of catching Atlanta to win the division.

Miami’s leadoff batter, Miguel Rojas, was returning from three weeks on the injured list. He flied out to Gerardo Parra in right. Corbin struck out Harold Ramírez and Garrett Cooper and was back in the dugout on just 10 pitches.

Caleb Smith (8-8, 4.05 ERA) was also facing a familiar division opponent. This was his third start against the Nationals in 2019. He went Corbin one pitch better by inducing fly outs from Trea Turner, Victor Robles, and Anthony Rendon on nine pitches.

Rendon showed off his All-Star arm in the second when Starlin Castro hit a hot shot to third. Rendon bobbled the ball but still managed to throw to a stretching Ryan Zimmerman in time. Zimmerman was also returning from the IL in this game; the 15-year veteran joked about being a “September call-up.”3 Corbin got Martín Prado and Lewis Brinson out on three pitches.

The Nationals got the scoring started in the bottom of the second. Juan Soto doubled into the right-field corner. After Howie Kendrick struck out, Zimmerman approached the plate to his new walk-up music: The Notorious B.I.G.’s “Old Thing Back,”4 a double-edged acknowledgement that he was the only remaining player from the Nationals’ initial 2005 season and that he’d spent most of 2019 on the IL.5

The crowd welcomed Zimmerman back to the field with cheers, exactly 14 years after his debut game. He advanced Soto on a groundout to third. Yan Gomes also grounded to third, but the throw from Martin Prado pulled first baseman Garrett Cooper off the bag and Soto scored. Parra popped out, but the Nationals were ahead, 1-0.

Corbin continued his dominance by striking out the side in the third. After striking out Corbin on three pitches and retiring Turner on a fly out to deep center to start the bottom of the inning, Smith plunked Robles just behind the knee. This was Robles’ 22nd HBP, second-most in the NL.6

With Rendon batting, Robles stole second, tearing his pants on the slide. The throw went into center. Robles rounded third aggressively, but third-base coach Bobby Henley put up the stop sign. The throw was Marlins catcher Bryan Holaday’s first (and only) error of 2019.

After Rendon walked, Soto drove a ball off the middle rail of the visitors’ bullpen fence for a double. Robles scored easily. Kendrick hit a foul pop to end the third, but the Nationals led, 2-0.

Rojas hit an easy one-hopper back to Corbin for the first out of the fourth. To say that Ramírez struck out swinging for the inning’s second out would be an understatement — he twisted himself into the dirt attacking Corbin’s last two pitches.

Cooper followed by striking out on three pitches, giving Corbin 200 strikeouts for 2019. Along with rotation-mates Max Scherzer (200 strikeouts) and Stephen Strasburg (215), Corbin completed a historic triumvirate of strikeout pitchers.7 The last time a National League team had three 200-strikeout pitchers was a half-century earlier: the 1969 Astros.8

Smith worked a clean bottom of the fourth. Whether it was the letdown after the 200th strikeout, or a “second time through the order” issue, the Marlins got to Corbin in the fifth. Castro broke the shutout with a home run well over the center-field wall. Prado reached on a grounder to short; Turner’s throw was up the line, so Prado was safe. Brinson walked after a 12-pitch battle.

Austin Dean doubled off the left-field wall, scoring Prado to tie the game. Pitching coach Paul Menhart paid a mound visit, perhaps just to give Corbin a breather, but Holaday’s sacrifice fly put Miami ahead, 3-2. Robles made an accurate throw from center, but too late to get the runner. Smith and Rojas grounded out, leaving Dean at third.

The Nationals answered in their half of the fifth. Turner grounded to deep short and beat the throw to first. Rendon hit a two-out homer into the front row of the Budweiser Porch, giving the Nationals the lead, 4-3. The homer also gave Rendon 111 RBIs for the year, a new team record.9 The previous record? Zimmerman’s 110 in 2006. Soto grounded out, but the Nationals had a lead they wouldn’t relinquish.

Corbin opened the sixth inning by striking out Ramírez for the third time. He issued two-out walks to Castro and Prado, but Miami couldn’t take advantage: Brinson grounded out.

Kendrick doubled just inside the left-field foul line to lead off the Nationals sixth, with the ball rolling into the corner. Zimmerman, still with his “Old Thing Back” music, homered halfway up the left-field stands for the 268th home run of his career. For the first time in 2019, the 34-year-old Zimmerman had to do a post-homer dance in the dugout.10 Following the “old thing” theme, he acted as if he were using a walker, to the great amusement of his teammates!

Next up was Gomes. He homered off the left-field foul pole, with the ball deflecting right into a young fan’s mitt, much to her delight. The Marlins challenged the call while Gomes stood on the top of the dugout steps watching his team lined up to dance with him. Once the umpires gave the home-run signal, Gomes finished his post-homer celebration.

Parra struck out, and the Marlins went to the bullpen to replace Smith. During the pitching change, and enjoying their 7-3 lead, the Nationals had “Simba Cam,” encouraging the families in attendance to hold up their youngsters to be shown on the video board. The Nationals in the dugout decided to participate, with Robles holding up Adam Eaton and another teammate holding up Soto.

Tyler Kinley took over the pitching duties for the Marlins. He ended the inning by striking out pinch-hitter (and September call-up) Raudy Read and getting Turner to fly out.

All Nationals reliever Wander Suero allowed in the top of the seventh was a base hit to Holaday.

Tayron Guerrero pitched the bottom of the seventh. Robles struck out. Rendon came to the plate to chants of “MVP, MVP”11 mingled with the “Let’s go NATS!” He singled into center — between Guerrero’s legs. Soto’s homer into the home bullpen brought the score to 9-3, Nationals. Kendrick flied out, Zimmerman walked, and Gomes grounded out to end the inning.

Javy Guerra worked a one-two-three top of the eighth with some help from his defense. Soto made a great running catch of Castro’s fly for the third out, reaching it just as he crossed the foul line.

Parra made his way slowly to the batter’s box to allow the crowd to participate in the “Baby Shark” phenomenon.12 José Ureña held the score: Although Parra reached on a ball that scooted under Rojas’s glove for Miami’s third error of the game, pinch-hitter Andrew Stevenson13 grounded into a double play and Turner flied out.

Among the players added to the roster on September 1 was Sean Doolittle, the Nationals’ closer for much of the year but on the IL since early August. He rode in on the bullpen cart in the top of the ninth to much cheering and “DOOOOOOO”-ing from the fans. He had said that he wasn’t ready to close yet, but he thought he was ready to help the team.14 A 9-3 lead seemed like a perfect time to get him back in the game. It worked out: He induced three fly outs to secure the Nationals’ win.

Besides Corbin and Rendon’s records, this game was notable for another reason: Of the Nationals’ nine hits, seven were for extra bases. This game was a high point in their regular-season surge from an early 19-31 record. The Nationals were five games back of the Braves — which was as close as they’d get until the end of September. They won only eight of their next 19 games before going on an eight-game winning streak to end the regular season, making their way to their World Series title via the wild-card game.

Although Corbin’s postseason record in his three games started was 1-2, where he really shone was in relief in elimination games. When it was “win or go home” in 2019, Corbin was nails: He pitched 1⅓ innings in NLDS Game Five against the Dodgers, allowing no hits; and innings six through eight in Game Seven of the World Series, allowing only two hits and no runs.

1 He also pitched seven one-run innings against them on July 2. The Nationals lost the lead in the eighth, but won the game on a walk-off in the ninth.

2 They broke the losing streak in their next game, beating the Pirates 5-4 in 10 innings.

3 In 2019, on September 1, a team could add as many players to its 25-man roster from its 40-man roster as it wanted. Some teams called up a few players, some packed their dugouts until it looked like spring training.

6 He finished the year with 25 HBP, just behind the NL leader Anthony Rizzo (27).

9 Rendon finished the year with 126, leading the majors.

10 Zimmerman had three previous homers, but they were before Parra arrived to initiate the dugout dancing. Thomas Boswell, “Gerado Parra Got the Nationals Dancing,” Washington Post, July 4, 2019. washingtonpost.com/sports/nationals/gerardo-parra-got-the-nationals-dancing-and-the-party-is-still-going-strong/2019/07/04/cc130460-9e87-11e9-9ed4-c9089972ad5a_story.html. Accessed December 2, 2020.

13 Stevenson was another September call-up, along with Adrián Sanchez and Read.