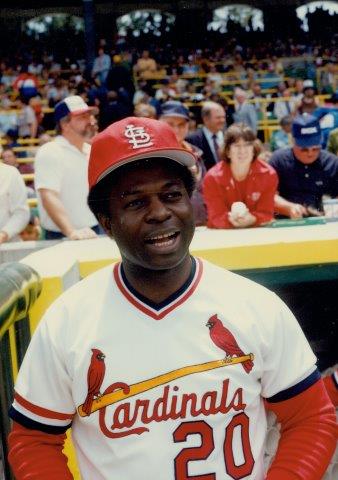 The cover of Sports Illustrated on July 21, 1974, was adorned with a picture of Lou Brock doing what he did best: running the basepaths. The headline on the cover trumpeted what everyone already knew: Brock was a “Thief at Work.”

The speedster from El Dorado, Arkansas, was not particular. He committed his brand of larceny either in the afternoon or the evening. Like a true master burglar, his victims knew he was the guilty party, but collaring him for the crime was an entirely different matter. The crime scene consisted of a dirt (or AstroTurf) basepath 90 feet long. He was both brazen and confident about his ability to pilfer bases at an extraordinary pace.

All eyes of the Gateway City were on Brock as the 1974 season headed to completion. In seven of the last eight seasons, the Cardinals left fielder had led the National League in stolen bases. In five of those seven years, Brock was the major-league leader. In 1974, however, the mere deed of leading the league was a footnote. Brock was on the path to a much loftier goal.

As the calendar flipped to the month of September, Brock had totaled a whopping 94 stolen bases. His closest competitor, if he could be so termed, was Davey Lopes of Los Angeles with 55 thefts. Brock was only 11 stolen bases from breaking the major-league record for the most in a season, held by Maury Wills of the 1962 Dodgers.

Bolstered by four stolen bases against San Francisco on September 1, Brock was on his way to surpassing Wills. But as much as Brock pursuing a record was a story for the press and the fans, another pursuit was also worthy of attention.

The St. Louis Cardinals (74-66) were battling Pittsburgh and Philadelphia (69-71) for supremacy in the National League East as the Phillies rode into town for a two-game series starting on September 9. The Pirates were in front of the pack, with the Cardinals in second place, 2½ games back. Philadelphia was still in contention, but time was running short, as they were in third place, 7½ games behind Pittsburgh.

In the opener, Jim Lonborg hurled a two-hitter at the Redbirds as the Phillies won 2-0. Brock walked in the sixth inning, but was cut down by Phillies catcher Bob Boone when he tried to steal second base. It was Brock’s 28th caught-stealing of the season. His stolen-base total was sitting at 103.

It didn’t take long for the Phillies to put a run up on the board. With one out, Larry Bowa tripled to right field. Mike Schmidt followed with his 35th home run and the Phils were in front, 2-0.

St. Louis came right back in the home half of the inning. Brock singled to left field, stole second base, and advanced to third on Boone’s throwing error. Brock stayed on third base when Ron Hunt grounded out to third. Reggie Smith followed with a double to center field to score Brock. Smith came home one batter later on a single to left field off the bat of Ted Simmons.

The score stayed at 2-2 until the top of the third inning. With two outs, Bowa singled and stole second base. Schmidt’s 24th double, to left field, sent Bowa across the plate and a 3-2 Philly lead. The Phillies extended the lead to 6-2 in the top of the fifth inning. Leadoff batter Dave Cash tripled to left. Schoendienst went to the bullpen and summoned Rich Folkers into the game. Folkers, a southpaw, proved not to be the cure against the Phillies bats. Bowa walked, Schmidt doubled to right, and Cash scored. With runners on second and third, Willie Montañez singled to right, plating both runners.

After a shaky beginning, Ruthven settled down and was keeping St. Louis off the scoreboard. Although St. Louis put men on base, Ruthven was there to shut the door.

With a strong outing by Ruthven and the Phillies seemingly scoring at will, the only question was whether Brock, who was now tied with Wills at 104 stolen bases, would pass him.

That question was answered in the bottom of the seventh inning when Brock singled to left. After a false start, he took off for second. Boone’s throw was in the dirt and Brock had his record 105th stolen base of the season.

The fans, all 27,285 of them, were in hysteria over Brock’s achievement. Play was halted for 10 minutes while a ceremony took place on the diamond. “I don’t think anybody anticipated it (on-field ceremony) would take that long,” said Ozark, “but the guy deserves at least 10 minutes after what he’s done.”1

Smith followed with a one-out single to center. The Cardinals had runners at the corners, but Ruthven snuffed out a potential threat by retiring Simmons on a fly out and Bake McBride on a pop to second base.

Philadelphia added two more runs in top of the eighth inning, as Ruthven helped his own cause with an RBI single for the last tally. Philadelphia completed the two-game sweep with the 8-2 win. Ruthven improved his record to 9-11 while Foster (7-10) was tagged with the loss.

Schmidt was the hitting hero of the game. He went 3-for-4 (one home run, two doubles) with four RBIs and he scored two runs. “I’m just trying to keep the ball in play,” said Schmidt. “If you’ve got some strength, you’re going to hit the ball over the fence anyway whether you swing hard or not.”2

Brock had his sights on breaking Wills’ mark earlier in the season. “The most important thing was to avoid slumps and keep healthy and it’s not that easy when you’re 35,” said Brock.

“On 105, I felt my legs swaying just before I reached the base,” said Brock.“I didn’t have enough energy to pop up with my slide. I guess I was pretty well spent.”3

In spite of the celebration and trappings that came with the new record, Brock knew there was a loftier goal in sight. “I’d have rather won the game,” said Brock, “but I guess you can’t have everything. At least I set it before the home crowd. The ultimate is still to catch up and win the pennant – that’s the only thing.”4

After the series with the Phillies, the Cardinals won six in a row and moved ahead of Pittsburgh by 2½ games on September 17. Unfortunately for Brock and the rest of the Cardinals, they were unable to maintain their pace in pursuit of the division title. St. Louis finished in second place, 1½ games behind the Pirates. The Phillies finished third, 8 games back.