Eight teams made up the American Association at the beginning of the 1891 season,1 and eight teams were around at the end, but they were not the same eight teams. The Cincinnati Kelly’s Killers, managed by Mike “King” Kelly,2 began the season in the mix but played their final game on August 16, as ownership struggled to balance the budget.

Milwaukee had fielded a minor-league team (the Milwaukee Creams) in the Western Association in 1890. They applied to be part of the American Association at the beginning of the 1891 season but were denied. Thus, Milwaukee began 1891 competing in the Western Association. By August, however, “it seemed the WA was going bust,”3 so Milwaukee’s ownership attempted once again to join the American Association. Upon hearing that they could buy “the Cincinnati club and … play its remaining schedule,”4 the first-place Creams players actually walked off the field in a game against Sioux City, losing by forfeit.5 That was the last day the Milwaukee team played as the Creams.6

Five players from Cincinnati (pitchers Frank Dwyer and Willard Mains, first baseman John Carney, second baseman Jim Canavan, and catcher Farmer Vaughn) joined the Milwaukee club, while others from both squads were let go. Charlie Cushman managed the new 16-player Brewers roster.7 The oldest player was 33-year-old left fielder Abner Dalrymple, who had played for the Creams since 1890. He had played 11 seasons in the National League (1878-1888), and Milwaukee’s entry in the American Association returned him to the majors for what turned out to be the final 32 games of his big-league career. Early in his career, Dalrymple was a solid hitter. He won the National League batting title in his rookie season (1878) and finished four seasons in the league’s top ten in batting average and five seasons in the top ten in OPS. Twice he led the NL in total bases (175 in 1880 and 263 in 1884), and in 1885, his 50 extra-base hits were a league best.8

The Brewers’ home field was Athletic Park,9 in Milwaukee’s north side. The ballpark “was situated on a rectangular city block,”10 and its dimensions were 262 and 266 feet down the foul lines, 425 feet to the left- and right-center power alleys, an average of 390 feet to center. Additionally, “the 588-by-366-foot plot created a ballpark shape that resembled New York’s Polo Grounds.”11

The restrictions to the rectangular shape meant that, since the diamond pointed due north, the foul lines ended at city streets. Anything hit right down either line left the park and entered the neighborhood. The short porch down the right-field line came into play in a game on September 12 against the Washington Nationals. Dalrymple hit the ball out of the park and sent it “sailing into a window”12 of a house, on his way to hitting for the cycle in the Brewers’ 10-4 win over Washington.

The Brewers had begun their American Association play with 15 games on the road, losing 10 of them. They returned to Milwaukee on September 10 to begin a three-game series against the seventh-place Nationals, which started a 21-game homestand that wrapped up their season.13 Milwaukee won the opener, 30-3, pounding out 24 base hits. In addition, the Nationals pitchers allowed 14 walks and hit three batters, and the defense behind the mound committed eight errors. The Brewers also won the second game of the series, 5-1. The Milwaukee Daily Journal informed its readers, “If Milwaukee keeps up her present pace, she will certainly prove anything but easy picking or the rest of the clubs as they come along.”14

In the third and final game of the series, on September 12, the Nationals “showed more vim and snap than in any of the previous contests,”15 but it wasn’t enough to beat the confident Brewers, especially with Dalrymple’s potent bat leading the way.

In the series finale, rookie right-hander George Davies pitched for the home team, or, as the Daily Journal reported, “was in the points.”16 It was his seventh start for the Brewers, and Milwaukee had won just two of his previous outings (all road games). He was opposed by another rookie righty, Washington’s Ed Cassian. Cassian had started the 1891 season playing for Philadelphia in the National League (six appearances, four starts), but he was acquired by Washington and made his first start for the Nationals on September 5.

An estimated crowd of 2,100 filed into the park on the 12th. The “somewhat threatening rain clouds”17 rolled away and gave way to clear skies when the umpire invited the players to take the field. Overall, the Nationals played well defensively, committing no errors, but they had trouble hitting Davies’ “peculiar drop ball.”18 The Sporting News reported that “the visitors found Davies a conundrum.”19

The Brewers “started the run-getting in the initial inning.”20 George Shoch walked with one out, and after Cassian recorded the second out of the inning, Dalrymple thumped a triple, giving Milwaukee a run.

Two innings later, the Brewers added two more runs. Shoch again reached on a walk and was sacrificed to second by Canavan. Dalrymple then “picked up his trusty bat and illustrated to the excited multitude the law of eccentric projection”21 by driving the ball well beyond the fence in right field for a home run. The Washington Post told its readers that Dalrymple’s homer was “the longest ever seen on the ground. The ball sailed over the fence; crossed over North 7th Street, which bordered the east side of the park; and went through the window of a dwelling-house nearly a block away.”22 It was his only home run of the American Association season.23

Three hits in the fifth allowed Shoch to notch another tally for the home team, giving it a 4-0 lead. In the bottom of the fifth, Washington finally made some noise. Tommy Dowd led off with a single. Gil Hatfield drew a walk, and Dan Shannon reached on an error by Milwaukee shortstop Shoch, loading the bases with no outs. That brought up the pitcher Cassian, who struck out. Larry Murphy flied out, but Deacon McGuire “changed the aspect of affairs”24 with a bases-clearing triple into left field. Sy Sutcliffe was retired to end the inning, but the Nationals now trailed by only one run.

The score remained 4-3 until the eighth, when Milwaukee added a run. Davies led off with a single and advanced a base on a passed ball. He scored on Shoch’s three-bagger. In the final frame, the Brewers broke the game wide open by scoring five runs off Cassian. Davies, John Grim, and Dalrymple led the attack with hits.

The Nationals started their final turn at-bat with successive singles by Dowd and Hatfield. Shannon once again reached on an error, this time by Milwaukee second baseman Canavan. Cassian’s RBI single brought Dowd home, but that was all Washington could manage, leaving three runners on base. The final score was 10-4; the game had lasted an hour and 46 minutes.

Seven of Milwaukee’s nine players got hits off Cassian, for a total of 16. In five trips to the plate, Dalrymple hit for the cycle, making a single, double, triple, and home run. Newspaper accounts do not explicitly name the inning for his single and double, although we know one of the two safeties took place in the ninth inning.

Brewers pitcher Davies added four hits to his cause, and Shoch had three hits as well. On the mound, Davies limited the Nationals to eight hits while striking out three and walking just one.

Dalrymple became the second major leaguer in 1891 to hit for the cycle, although he was the only American Association player to accomplish the rare feat that year. Dalrymple joined Chicago Colts (National League) outfielder Jimmy Ryan, who hit for his second career cycle on July 1 against the Cleveland Spiders.25

Milwaukee was 16-5 at home to finish the 1891 season at 21-15. The team did not lose a series at Athletic Park. The Brewers, however, did not raise enough capital in their short tenure in the American Association, so at the conclusion of the season, they still owed money to Cincinnati. When the league folded at the end of the 1891 season, four of its teams jumped to the National League, but the cash-strapped Brewers folded, too. Their one season in the American Association consisted of 36 games, and Dalrymple’s performance on September 12 had to be one of the season’s highlights. With his rare accomplishment, Dalrymple became the last batter in the history of the major-league American Association to hit for the cycle. 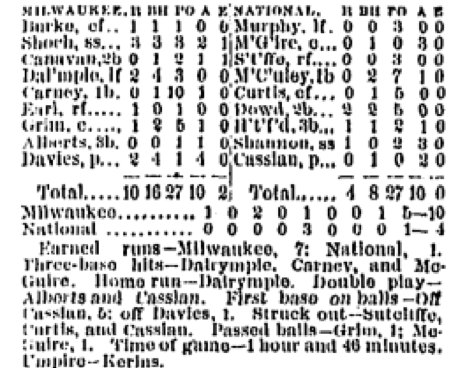 The author expresses sincere gratitude and appreciation to Jill Fleck of the Milwaukee Public Library for providing scans of pages from both the Milwaukee Sentinel and the Milwaukee Daily Journal. Thanks also to SABR colleague Kevin Larkin for additional statistics on the Milwaukee Creams and Abner Dalrymple.

1 The 1890 season saw nine teams play in the American Association.

2 Kelly managed the 1887 Boston Beaneaters (National League), the 1890 Boston Reds (Players League), and the 1891 Cincinnati Kelly’s Killers (American Association). He played 16 seasons in the majors (1878-1893), primarily as a catcher and right fielder, but he did play every position, including pitcher. He retired with a .307 career batting average with 69 home runs, 950 RBIs, and 368 stolen bases. Kelly was posthumously inducted into the Hall of Fame in 1945.

9 Athletic Park opened in May 1888 and was renamed Borchert Field in 1928. It was demolished after Milwaukee’s County Stadium was opened in 1953.

23 While playing for the Chicago White Stockings, Dalrymple had led the National League in home runs in 1885 with 11. In 1884 he knocked 22 round-trippers, good enough for third place; his teammate Ned Williamson led the majors in home runs with 27.

24 “Nearing the Tail End.” McGuire caught 114 games for the Nationals in 1891 and sported the second-best average of the regular players (.303). He tied for the team lead in triples (10), which was also a career high for him. (McGuire played 26 seasons in the majors.)

25 Ryan garnered his first cycle on July 28, 1888, while playing for the Chicago White Stockings, in a game against the Detroit Wolverines.