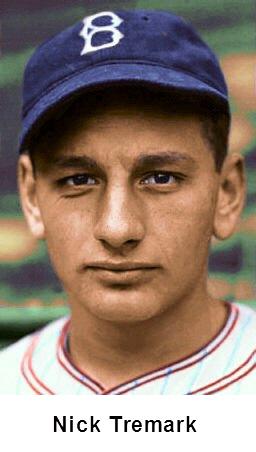 Brooklyn Dodgers manager Casey Stengel released 34-year-old Hack Wilson in August 1934, and picked a surprising replacement: 21-year-old rookie outfielder Nick Tremark, a left-handed batter, of Italian ancestry, from Yonkers, New York.1 What distinguished Tremark from other ballplayers was his diminutive stature – he stood 5 feet 4¾ inches.2 “Because he is a little fellow he is going to be difficult to pitch to,” said Stengel. “There isn’t much space between his knees and shoulders.”3 Stengel added: “He hits a ball far for such a little guy. He put several baseballs over the right-field wall [in practice].”4 Umpire Bill Klem said, “I think he’ll be a good ballplayer. … I know they’ll say that he’s too small, but they said that about Rabbit Maranville more than 20 years ago.”5

In September 1934 the last-place Cincinnati Reds came to Brooklyn for a five-game series with the sixth-place Dodgers at Ebbets Field. The Dodgers won three of the first four games. The final game, on Wednesday, September 12, was attended by only a few hundred fans.6 Tremark, nicknamed Mickey Mouse by his teammates,7 did not start but made an impact when he entered the game in the sixth inning.

The umpires were Cy Pfirman behind home plate and Bill Klem at first base. With singles by Mark Koenig, Jim Bottomley, and Harlin Pool, the Reds scored twice in the top of the first inning facing Brooklyn pitcher Owen Carroll. Leading off the bottom half, Glenn Chapman smacked a double off Cincinnati pitcher Ted Kleinhans; center fielder Chick Hafey fielded the ball and threw to Koenig at third base, but Koenig missed the throw and the ball bounded into the dugout, allowing Chapman to score. Reds manager Chuck Dressen then removed Kleinhans from the game – perhaps as punishment for failing to back up the play – and replaced him with Paul Derringer.

The Dodgers loaded the bases in the second inning, but Derringer escaped by fanning Carroll and Chapman. An inning later, Brooklyn’s Lonny Frey singled, stole second base, and scored on Danny Taylor’s single to right field.

Singles by Koenig, Hafey, Pool, and Ernie Lombardi gave the Reds two more runs in the top of the fifth, as Carroll was knocked out of the game and relieved by Johnny Babich. In the bottom of the fifth, Frey doubled to right field and scored on Len Koenecke’s single to center.

Trailing by a run in the sixth inning, the Dodgers had runners on first and second when Tremark stepped to the plate, pinch-hitting for Babich. Sportswriter Tommy Holmes of the Brooklyn Daily Eagle described the at-bat:

“Big Ernie Lombardi, Cincinnati catcher, patronizingly smiled down from his great height and big Paul Derringer, who was pitching, laughed indulgently as Tremark, dead serious, prepared to level on the first pitch. He literally blasted the ball. Jaws dropped all over the ball park as the terrific line drive Tremark hit sped to the far corner in left center. Two runs galloped across the plate. A crestfallen Derringer was taken out of the game.”8

Derringer was replaced by southpaw Beryl Richmond, who quashed the Brooklyn rally. Tremark stayed in the game as the left fielder, and 38-year-old Tom Zachary took the mound for the Dodgers. Zachary is perhaps best known for allowing Babe Ruth’s 60th home run in 1927. Chick Hafey did his best impression of Ruth by homering off Zachary in the top of the seventh to tie the score, but the Dodgers scored a run in the bottom half to retake the lead, 6-5.

Stengel then put Walter Beck in to pitch for the Dodgers. “Boom-Boom” Beck had a miserable start to the 1934 season, with a 0-6 record and a 9.20 ERA, when he was demoted to the Albany (New York) Senators in July. He fared little better in Albany, with a 2-6 record and a 7.62 ERA, before he was recalled by the Dodgers. Holmes said Beck needed more on the ball than “a fervent hope,”9 but Stengel trusted him here to hold the Brooklyn lead.

In the top of the eighth Beck retired Lombardi on a foul pop, walked Adam Comorosky, and induced rookie Frank McCormick to ground into a double play. The Dodgers added an insurance run in the bottom of the inning. With a 7-5 lead, Beck needed to get three outs in the top of the ninth to secure the Brooklyn victory. Sparky Adams led off and grounded out. Gordon Slade drew a walk, and Koenig flied out. Thinking the game was in hand, Brooklyn fans headed for the exits as Jim Bottomley came to bat with two outs and a man on first. The slugger launched a “booming homer far over the tall screen in right field,”10 and the fans groaned. “This blow supplied the reason why the fans call him ‘Boom-Boom’ Beck,” noted the Cincinnati Enquirer.11 The Dodgers failed to score in the bottom of the ninth, and the game went to extra innings deadlocked at 7-7.

Beck retired the Reds in order in the top of the 10th with help from Mickey Mouse. Lombardi lashed “a fearfully hard hit low liner” to left field, where Tremark made “a remarkable lunging catch.”12

Brooklyn’s Buzz Boyle tripled off Cincinnati’s Si Johnson to lead off the bottom of the 10th. To set up a force play at the plate, Johnson intentionally walked the next two batters. Stengel then sent in a left-handed pinch-hitter, Sam Leslie, to face the right-handed hurler. Dressen countered by replacing Johnson with Junie Barnes, a 22-year-old southpaw making his major-league debut in a precarious situation. With the bases loaded and no outs, the nervous lad walked Leslie to force in the winning run. The final score was Brooklyn 8, Cincinnati 7.

Beck was the winning pitcher, earning his first major-league victory of 1934. Johnson took the loss, dropping his season record to 7-19; his 19 losses led the major leagues. Both managers made liberal substitutions throughout the game. In all, 34 players participated – 15 for the Reds and 19 for the Dodgers. Holmes joked that “expert accountants were required to aid in the compilation of the box score.”13

Tremark batted .333 in 1935 and .379 in 1936 for the Allentown (Pennsylvania) Brooks of the Class A New York-Pennsylvania League. In each season he was called up to Stengel’s Dodgers in September.