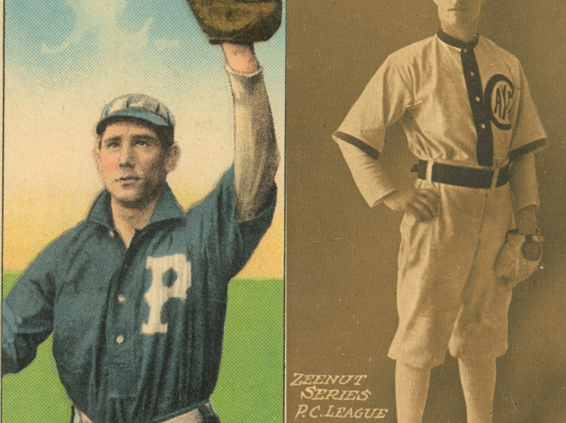 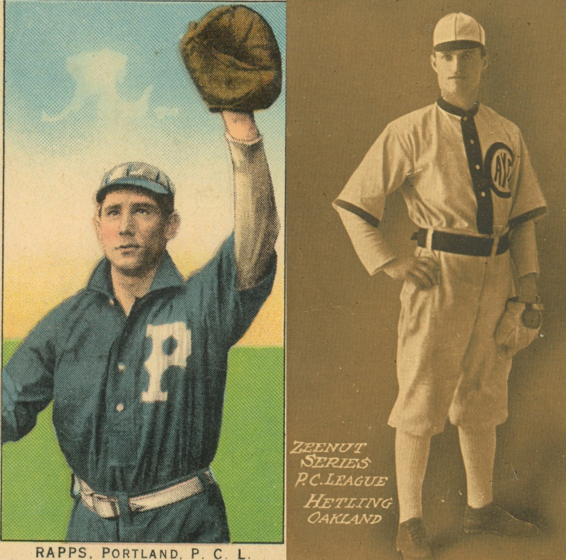 In more than 200,000 games in major-league history through the 2021 season, only 15 unassisted triple plays have been recorded. Just 35 games have ended on a steal of home. These extremely rare occurrences have never happened in the same major-league game.1

One minor-league game, however, did feature both an unassisted triple play and a game-ending steal of home: the thrilling Pacific Coast League showdown between the Oakland Oaks and Portland Beavers on September 14, 1912. First, Portland’s Bill Rapps turned a triple play in the eighth inning; then, Gus Hetling gave Oakland a 6-5 win with his ninth-inning dash for home.

Rapps and Hetling had traveled similar paths to their probability-defying afternoon at San Francisco’s Recreation Park. Both were natives of Missouri, and both had played in the Missouri Valley League in 1903 and 1904 and in the Western Association from 1905 through 1908. They were teammates on the 1909 Kansas City Blues and 1910 Portland Beavers. Of the two, only Hetling made the majors, playing in two games with the Detroit Tigers in 1906.

Manager Walter McCredie had led Portland to consecutive pennants in 1910 and 1911, and Rapps was his first baseman. A solid hitter and brilliant fielder, Rapps was called “a second Hal Chase.”2 Nicknamed “Roaring Bill,” he was known for his “vocal ginger” on the ball field and his “famous yell” that sounded like a buzz saw.3

In 1912 McCredie’s defending champs were languishing in fourth place in the six-team PCL when they faced Oakland in an eight-game series, starting on September 10. The series was played at alternating venues, Recreation Park in San Francisco and Freeman’s Park in Oakland. The Oaks won four of the first five games and moved into first place. The sixth game, on Saturday, September 14, was played at Recreation Park. Oaks manager Bud Sharpe was out sick for the series, so Carl “Honus” Mitze, the Oaks catcher and captain, served as acting manager.4

Hetling had been instrumental to the Oaks’ success, said McCredie before the series.5 The third baseman was hitting .324,6 and his fielding was superb. The San Francisco Examiner declared that he was “the fastest and surest man on picking up bunts that has ever played on the Coast.”7 Oakland fans were rooting for him to win the PCL Most Valuable Player Award and the big Chalmers automobile that went with it.8

The starting pitchers on September 14 were right-handers: Irv Higginbotham for Portland and Jack Killilay for Oakland. By hurling a shutout three days earlier, Higginbotham had earned Portland’s sole victory of the series.9 With a 10-2 season record, Killilay led PCL pitchers with an .833 winning percentage.10

The umpires were George Hildebrand and Frank Newhouse. The attendance was not reported, but by all accounts there was a fine crowd on hand.

Shaky defense by the Beavers helped the Oaks early. Hetling got aboard in the second inning on an error by Bill Rodgers, the Portland second baseman and captain, and singles by Doc Cook and John Tiedemann brought him home. In the third inning, a wild throw by third baseman Hank Butcher allowed Bill Leard to reach second, and Leard scored on Elmer Zacher’s single to right field for a 2-0 Oakland lead.

Portland rallied for three runs in the sixth inning. Chet Chadbourne led off with a double. Justin Fitzgerald tested Hetling by dropping a bunt down the third-base line. Hetling “made one of his customary circus pickups and lightning throws in time to put Justin justout.”11

But Hetling misplayed a grounder from the next batter, Rodgers. Chadbourne came home on Walt Doan’s single to left field, with Rodgers advancing to third and Doan to second. Butcher smacked “a very healthy single against the right-field fence,”12 scoring Rodgers and sending Doan to third.

Doan in turn scored on a squeeze play: Rapps bunted back to pitcher Killilay, who threw home too late to get Doan. Killilay got out of the jam by picking off Butcher at second base and striking out Dave Bancroft, Portland’s precocious 21-year-old shortstop, but Portland now led, 3-2.

The Oaks regained the lead with a pair of runs in the seventh inning. With men on first and second, Bert Coy drove the ball to the left-field corner for a two-run double. Oakland fans were jubilant. But they “jubed, or jubiled or jubilated, or jubilanted … too soon,” wrote Al C. Joy of the Examiner.13 In the top of the eighth, Rapps slugged a two-run home run over the right-field fence, and the Beavers were back on top, 5-4.

Rapps was not finished with his eighth-inning heroics. Mitze led off the bottom of the inning by drawing a walk. When pitcher Higginbotham threw poorly to second after fielding Killilay’s bunt, the Oaks had runners on first and second.

Representing the potential tying run at second base, acting manager Mitze called on Tyler Christian to pinch-run for him. Leard was next up and everyone expected him to bunt. He tapped the ball in the air toward Rapps, who was charging in from his position at first base.

The runners took off with heads down, no one expecting Rapps to catch it. But Rapps did catch it, at his shoetops. As he made the spectacular grab, he fell to the ground and rolled over. He rose and ran to first base to double up Killilay, then ran to second to retire an astonished Christian, who was standing at third. Rapps thereby completed one of the rarest of all baseball plays: an unassisted triple play.14

Rapps’ play preserved Portland’s lead, and the Oaks came to bat in the bottom of the ninth trailing by a run. Clare Patterson beat out a slow roller to Rodgers, moved to second on Zacher’s sacrifice, and took third on Coy’s infield out. Hetling drew a walk and, with Cook batting, stole second base. The potential tying run was on third base and the winning run on second.

Higginbotham threw a wild pitch that sailed high over the head of catcher Gus Fisher. Patterson stormed home with the tying run and Hetling advanced to third base.

Moments later, Hetling raced for home as Higginbotham delivered a pitch to Cook. It was “a nerve-racking, hair-raising sprint to the plate.”15 Hetling was barely safe and the crowd roared. His steal of home had won the game. The final score was Oakland 6, Portland 5.

Among the fans in attendance was a boy named Alan Ward, seeing his first professional game. Fifty years later, as sports editor of the Oakland Tribune, he said it was the most memorable game he had ever seen, “a sunny afternoon of breathtaking wonder and excitement.”16

Reporters covering the game were similarly effusive. It was “the most highly flavored baseball dish of the season,” wrote Al C. Joy.17 “Those who were fortunate enough to witness it never will forget the many sensations that were handed out,” said William J. Slattery of the San Francisco Call.18 “Oh, yes, it was some baseball game, and will be talked about for many moons to come,” echoed Bert Lowry of the Oakland Tribune.19

The teams wrapped up the series the next day with the Oaks sweeping a doubleheader from the Beavers. After winning seven of eight games, the Oaks were atop the PCL standings and held a two-game lead over the second-place Los Angeles Angels.20

The Oaks went on to win the pennant – the first in the team’s 10-year history – and Hetling was named MVP of the league. In a grand ceremony in October 1912, he received his prize: a 1913 Chalmers “Thirty-Six” car.21

It was quite a trophy: The vehicle’s advertised selling price of $1,95022 (equivalent to $58,000 in 2022) was probably greater than his 1912 salary. “Hetling is highly elated over winning the machine,” reported the Examiner, “and declares he will spend most of his winter vacation driving it around Oakland.”23

Rapps and Hetling were teammates in 1916 on the Wichita/Colorado Springs team of the Western League. Later in life, they resided in Kansas – Hetling in Wichita and Rapps in Iola – and they died there in the 1960s. In their old age they surely reminisced about the game of September 14, 1912.

Right image: 1911 baseball card of Gus Hetling, distributed in packages of “Zee-Nut, a candied popcorn” by the Collins-McCarthy Candy Company of San Francisco.25

7 “Gus Hetling Is Winner of Automobile, Is the Most Valuable Player to His Club,” San Francisco Examiner, October 25, 1912: 13.

8 “Hetling Is Picked as the Greatest Coast Player.”

14 Of the 15 unassisted triple plays in major-league history, only two were achieved by first basemen: Boston’s George Burns on September 14, 1923, and Detroit’s Johnny Neun on May 31, 1927. The others were accomplished by shortstops and second basemen. “Unassisted Triple Plays: Major League Baseball Players Who Turned an Unassisted Triple Play.”

19 “Oaks Stick by the Guns and Nose Out Beavers in a Thrilling Battle on Diamond.”

21 “Gus Hetling Is Winner of Automobile, Is the Most Valuable Player to His Club.”