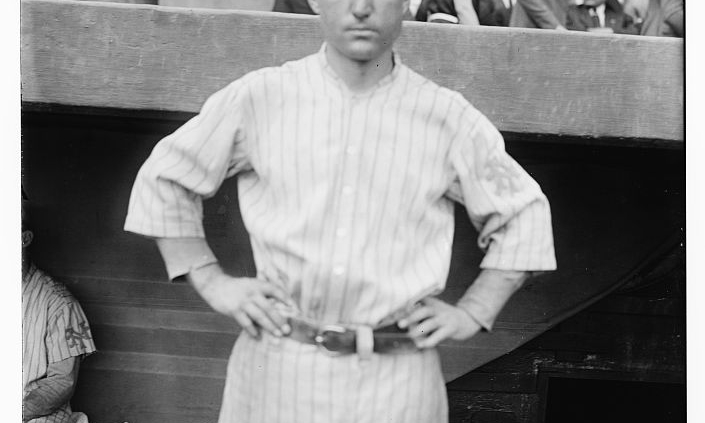 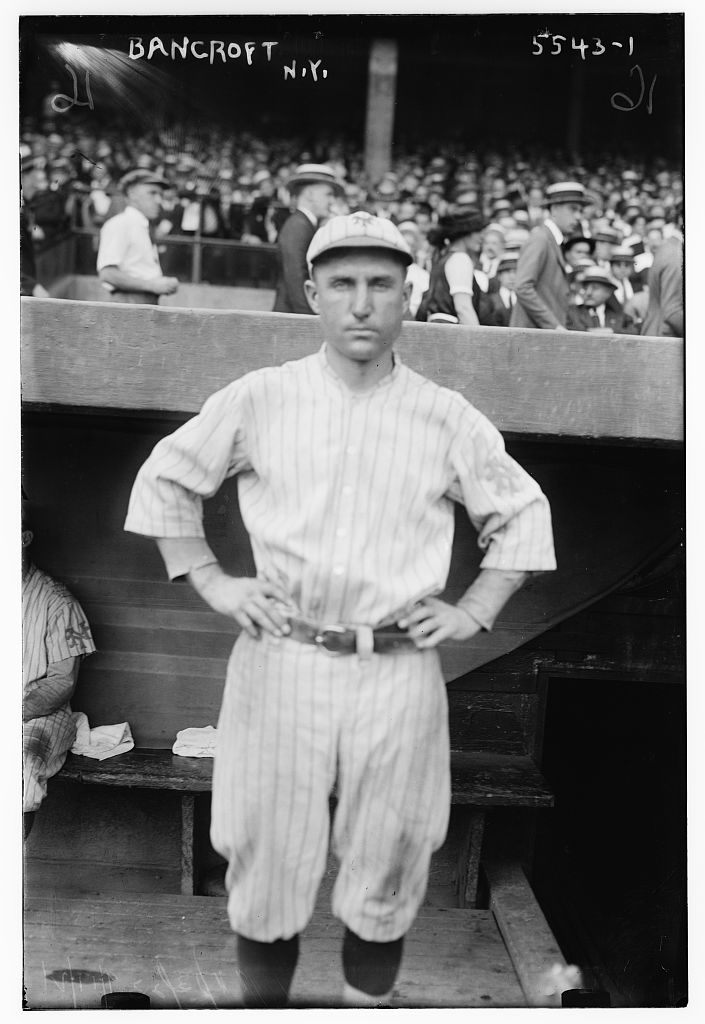 Dave “Beauty” Bancroft was Honus Wagner‘s successor as the National League’s premier shortstop. A brainy on-field leader with tremendous defensive range, Bancroft was especially adept at scooping up bad-hop grounders and cutting off outfield throws to hang up runners between bases. He believed that “the business of batting and fielding is a contention between minds,” crediting his uncanny intuition in the field to a rigorous study of opposing batters, but he also had extremely quick hands and could move gracefully in either direction. Though he batted only .248 during his five seasons in the Deadball Era, the switch-hitting Bancroft became known as a “timely swatter and a good waiter”; he ranked second in the NL in bases on balls in 1915 and third in 1916 and 1918.

The youngest of three children born to Ella (Gearhart) Bancroft and her husband, Frank, a truck farmer and newsvendor on the Milwaukee Railroad, David James Bancroft was born on April 20, 1891, in Sioux City, Iowa. Dave attended Hopkins Grade School and Sioux City High School. During the summer after his junior year of 1909, he began his professional baseball career with Duluth, Minnesota, that year’s Minnesota-Wisconsin League champions. In midseason Duluth sent the 18-year-old shortstop to Superior, Wisconsin, its rival on the south shore of St. Louis Bay. For the summer Bancroft batted .210 with only six extra-base hits in 111 games. He returned to Superior the next year and played in a league-leading 127 games, improving his average to .267, stealing 38 bases, and earning a reputation as a defensive star. Dave remained there after the season to marry Edna Harriet Gisin. The couple, which remained childless, continued to make their home in the Lake Superior harbor town for the rest of their lives.

After hitting .273 with 41 stolen bases in his third year at Superior, Bancroft was drafted by the Portland Beavers of the Class AA Pacific Coast League in the fall of 1911. The next year he batted just .212 and was demoted to the Colts, Portland’s club in the Class B Northwestern League. Two of Bancroft’s 1913 Colts teammates—Harry Heilmann and Carl Mays—were bought by Detroit, but the best Dave could manage after hitting .244 was a promotion back to the PCL. Batting leadoff, “Beauty” (a nickname he received because of his habit of shouting “Beauty” every time his pitcher threw a good-looking pitch) hit .277 in 176 games and led the Beavers to the PCL championship, prompting fans to compare him to Roger Peckinpaugh, who had starred at shortstop with the 1911 Portland club. Cleveland and the New York Giants had the first two picks of any of the Portland players. The Indians selected Bill Rodgers, Bancroft’s partner in the middle infield, while the Giants, fearing that Bancroft wanted too much money and might sign with the Federal League, chose third-baseman Art Kores (who ironically did jump to the Feds). Phillies scout Cap Neal stole Bancroft for a mere $5,000.

Whatever worries Philadelphia fans had that the rookie wouldn’t be able to replace their revered Mickey Doolan in the short field were unfounded. Bancroft was the sensation of the year, sparking the Phillies to their first NL pennant by batting .254 with a career-high seven home runs (six of them at the Baker Bowl) and playing spectacular defense. Manager Pat Moran insisted that Dave was the difference between the pennant-winners of 1915 and the sixth-place club of 1914. In the World Series the 24-year-old Bancroft hit .294, more than 100 points higher than the Phillies hit as a team.

Bancroft suffered through a sophomore slump in 1916, batting a career-low .212 with just 13 extra-base hits, and his late-season injury decimated the Phillies’ pennant drive. He did continue to play fine defense, however. On August 12 he initiated a triple play against the Giants. With Larry Doyle on third and Buck Herzog on second, Dave Robertson got the hit-and-run sign and lined the ball to Bancroft, who caught the drive and whipped the ball to Bobby Byrne, catching Doyle several feet off third, and then taking Byrne’s return throw to catch Herzog off second.

His batting average rose consistently for the next five seasons, and in 1918 he led NL shortstops in chances handled for the first of four times. In five seasons in Philadelphia Bancroft established a reputation as a smart, scrappy ballplayer, well suited to the scientific game—exactly the type of player John McGraw coveted. At McGraw’s suggestion, Giants owner Charles Stoneham telephoned Phillies president William Baker on June 7, 1920, and offered shortstop Art Fletcher, pitcher Wilbert Hubbell, and $100,000 for Bancroft. An incredulous Baker took the first train to New York the next morning and consummated the deal, bringing along the National League attorney as a witness lest Stoneham try to back out.

When Bancroft took the field in his first game as a Giant, catcher Frank Snyder called him to a conference on the mound and offered to explain the team’s signs. “Why, have they changed?” asked Bancroft. “If not, I know them already.” On June 28, 1920, less than three weeks after his acquisition, the new Giants collected six hits in six at-bats. Bancroft became one of only two National Leaguers to score 100 runs that season, and although the Giants failed to capture the 1920 flag, they won the next three pennants with “Beauty” as their captain. No shortstop turned 100 double plays in a season before Bancroft set the mark in 1921, and the following year he set the major-league record for most chances handled in a season by a shortstop (1046). Sportswriter Frank Graham called him “the greatest shortstop the Giants ever had and one of the greatest that ever lived.”

During the 1923 season Bancroft’s legs began to bother him. In June he reported to the Polo Grounds with a high fever but insisted on playing. At the end of the game Bancroft collapsed in the clubhouse. He ended up being hospitalized with a severe case of pneumonia, earning even more admiration from John McGraw (“Imagine, he played nine innings with pneumonia.”). That November, as a favor to Christy Mathewson, who was then general manager of the Boston Braves, McGraw sent Bancroft and outfielders Casey Stengel and Bill Cunningham to Boston for pitcher Joe Oeschger and outfielder Billy Southworth. McGraw wanted to give his captain the opportunity to manage, but he also had Travis Jackson waiting to take over at shortstop. At age 33 Bancroft became the NL’s youngest manager.

From 1924 to 1927 Bancroft managed the talent-poor Braves to a 249-363 record and four consecutive second-division finishes, after which he was dismissed. He put in two seasons with Brooklyn as a player only before returning to the Giants in 1930 as a coach under McGraw. Bancroft retired as a player after the 1930 season but remained an important presence in the Giants dugout, taking over the reins whenever his boss was too sick to manage. McGraw finally retired in June 1932 but Bill Terry was appointed player-manager to take his place. A disappointed Bancroft finished the year under Terry and retired from major-league baseball. He returned to his native Midwest and managed sporadically in the minor leagues, guiding the Minneapolis Millers of the American Association in 1933, the Sioux City Cowboys of the Western League in 1936, and the St. Cloud Rox of the Northern League in 1947.

Later Bancroft spent three years managing Max Terry’s traveling all-girls team, which took him across the United States and to South America and Cuba. When he finally left baseball he became a warehouse supervisor for Interprovincial Pipeline Company. Retiring in 1956 to pursue his favorite pastimes of hunting and fishing, Bancroft was inducted into the National Baseball Hall of Fame in 1971. He died in Superior on October 7, 1972, a little more than three years before the Edmund Fitzgerald left that same town on its final voyage.

For this biography, the author used a number of contemporary sources, especially those found in the subject’s file at the National Baseball Hall of Fame Library. In addition, the following books were consulted: