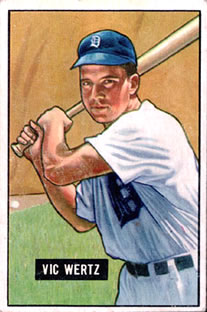 The Detroit Tigers “waited until late in the waning season to unlimber their greatest offensive show of the 1947 season,” as they swept a doubleheader from the Washington Senators at Griffith Stadium. A small crowd of 11,170 gathered to watch the double defeat. The Washington Post declared, “Defeat is hardly the word to use to describe what happened in the first game. Mayhem comes closer to painting the real picture.”1

In the first game, the Tigers sent “the clever right-hander”2 Fred Hutchinson to the mound. He had split time as a starter and reliever for Detroit, but this was his fifth straight start. His last three starts had all been complete games, so manager Steve O’Neill was hoping for lots of innings from Hutchinson, especially with a doubleheader on the schedule. The home team countered with Walt Masterson. He had thrown four consecutive complete games coming into this contest, and he had lowered his ERA to 2.79 while winning three of his last four starts.

The Tigers greeted Masterson by scoring five runs. The Detroit Free Press reported that the “explosion came after two were out.”3 Eddie Lake singled to start the game. Vic Wertz walked with one out and Masterson struck out Pat Mullin. Then came consecutive RBI singles by George Kell, Hoot Evers, Roy Cullenbine, and Hal Wagner (who drove in two runs). Hutchinson lined out for the third out, but the Tigers had batted around.

Detroit placed two more men across home plate in the second. Eddie Mayo singled after Lake had fanned. Wertz drove the ball into right field for a triple and Mayo scored the sixth Tigers run. Mullin flied out to left, but it was deep enough to for a sacrifice, bring Wertz home with number seven. Now, with the bases empty and two away, Masterson walked Kell and gave up a single to Evers. Cullenbine grounded out to end the new rally.

Morris Siegel of the Washington Post tried for some sarcastic humor in describing the game, writing, “In case you came out to the park late or tuned in on your radio after the second inning you missed him. ’Twould be nice to say that the Tigers did, too, but they didn’t.”4 The second inning was the last for Masterson. Senators skipper Ossie Bluege brought in rookie Scott Cary to relieve Masterson and start the third, but the young left-hander “was only a slight improvement.”5 Masterson wasn’t in the game long enough to get an at-bat, and Cary led off the top of the third.

Hutchinson had allowed one runner to reach in each of the first two frames, but in the third he ran into trouble. After Cary struck out, John Sullivan singled and advanced to third when Buddy Lewis followed with a single to right. Sherry Robertson pulled a grounder to first baseman Cullenbine, who threw to second to force Lewis, but Robertson was safe at first and Sullivan scored.

Wertz singled to lead off the Detroit fourth, and Mullin laid down a sacrifice bunt (with a 7-1 lead!) to advance Wertz into scoring position. This strategy paid off, as Kell drove a single into left field and Wertz came around to score.

In the home half of the fourth, Washington finally gave its fans something to cheer about. Cecil Travis tagged Hutchinson for a double to center. Jerry Priddy followed with an RBI single. Hutchinson retired Rick Ferrell and Cary on groundouts, but that put Priddy on third. Sullivan singled up the middle, plating Priddy. Lewis also singled, and then Robertson hit a grounder “that took a freak hop over Mayo’s head”6 and shot into right field for a double. Sullivan scored and Lewis held up at third, but he and Robertson trotted home when Mickey Vernon singled to center. The inning ended with the score 8-6 in favor of the visitors, but that’s as close as the Senators came.

Detroit responded immediately in the fifth. Hutchinson and Mayo each singled, and with two outs, Wertz blasted his sixth homer of the season, giving the Tigers three more runs. They added another in the sixth on a solo shot by Evers, his ninth of the year. The Tigers now led 12-6.

In the seventh the hit parade continued. With one out, Mayo singled and Wertz doubled to left, giving him one of each type of hit. He had hit for the cycle. Mullin tripled into the gap in center, and two more runs scored. Kell singled in Mullin and Evers doubled, driving in Kell. Bluege made his way to the mound, and Buzz Dozier, “the young Texas fireballer, was ushered into the slaughter.”7 He fared much better, getting the Senators out of the inning and limiting the Detroit batters to just one hit and no runs over the final 2⅔ innings of the game.

Wertz’s 4-for-5 performance (he grounded out to second in the ninth) with a walk, four runs batted in, and five runs scored was a career day for the rookie, and his batting average rose from .281 to .291. Before this game, he had garnered five hits in a game on August 20, but in that game he had two doubles and a single. He tied his best for RBIs in a game (set August 15 against the Chicago White Sox). Wertz had now hit in five straight games. His hitting streak reached eight games. He “almost licked the Nats single-handed.”8 His five runs scored was only one less than the Senators amassed as a team. For the 1947 season, Wertz batted .333 (7-for-21) at Griffith Stadium, but this was the only game in which he recorded any extra-base hits

The Tigers scored runs in six different innings. Mayo was 3-for-6 with three runs scored. Kell and Evers had identical lines, with 4-for-5 at the plate, plus a walk, three runs driven in and two scored. Evers, though, was a triple shy of hitting for the cycle himself. Every other Tigers batter (including pitcher Hutchinson) contributed a hit. Detroit left nine runners on base, as “the massacre of the Nats served more than just to fatten the Tiger batting averages.”9 Masterson was tagged with the loss, and in his final four games of the season, he allowed 12 earned runs and finished the year with three straight defeats

Despite allowing six earned runs, Hutchinson went the distance for Detroit, picking up his 15th win of the season. Five Washington hitters collected two hits apiece, but they couldn’t do any more damage than the fourth-inning outburst. He also earned decisions in his final three starts, but they were all victories for the Tigers, and Hutchinson ended the season with a record of 18-10, arguably his best year in the majors.

In the second game, the Tigers put together an 11-hit attack in doubling up the Senators, 8-4. They jumped on starter Milo Candini for two runs in the first inning and scored four more in the second inning, even after Tom Ferrick came in to relieve Candini. Kell had two hits in the game, and Wertz was 1-for-3 with two walks, scoring two runs. The Senators had good swings against Detroit’s Dizzy Trout, reaching him for 12 hits in eight innings (Al Benton pitched a scoreless ninth), but Washington stranded nine runners on base. For the Nats, Stan Spence stood out with a 4-for-4 day, but his teammates couldn’t capitalize. Masterson pitched the final five innings of the game, allowing two earned runs on five hits and three walks, but at least he did get to bat, getting a hit in his only at-bat.

Since the Chicago White Sox-Boston Red Sox game was called in the seventh inning due to rain (with the score 1-1), the Tigers jumped into second place in the American League pennant race. However, they were still 12½ games out of first. Detroit ended the season with a five-game win streak, but was only 8-4-1 after this game and settled for the runner-up position in the American League.

10 Doerr hit for the cycle for the first time on May 17, 1944, against the St. Louis Browns. Both of Doerr’s cycles took place at Boston’s Fenway Park.