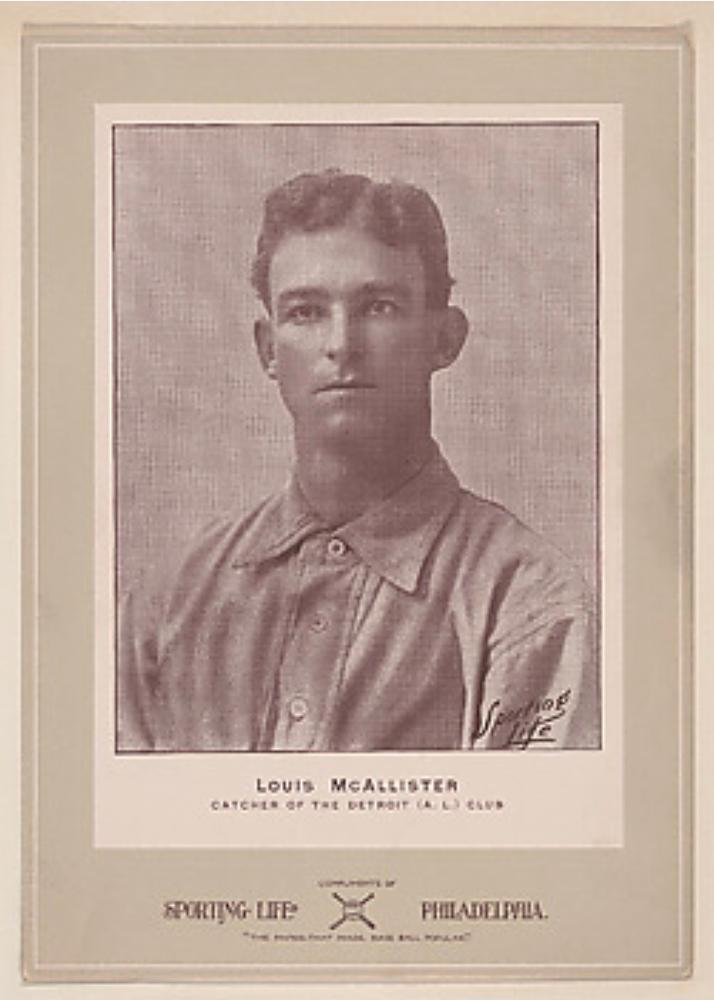 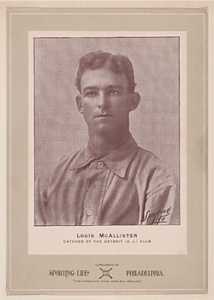 As the 1901 season moved into its final two weeks, the Cleveland Blues (later the Indians) were all but limping to the finish. Although they had had played .500 ball over the previous six weeks, going 22-22 between August 1 and September 14, as they came into a Sunday afternoon contest against the Detroit Tigers on September 15, they were mired in seventh place at 52-71, due largely to a horrific April and May (8-22). The only team behind them in the standings was the Milwaukee Brewers, who finished last and ended up relocating to St. Louis for 1902, where they became the Browns.

The blame for the Blues’ miserable season rested on both their hitting and their pitching. Although the team had three .300 hitters among its regulars that year — first baseman Candy LaChance (.303) and outfielders Ollie Pickering (.309) and Jack McCarthy (.321) — it was the second worst offensive team in the American League, then in its first year as a major league: the Blues’ 666 total runs were better only than league-worst Milwaukee and were 69 runs fewer than the league average.

Their pitching was even worse: Although right-handed starter Earl Moore ranked seventh in ERA (2.90) and sixth in pitching WAR (4.9), Blues pitchers allowed more runs than any other AL team, 831 (the league average was 735), and ranked dead last in ERA at 4.12, more than a run worse than league-leading Chicago’s 2.98.

In the September 15 game in Detroit, both of those failings would contribute to bringing the team the ignominy of succumbing to what still stands as one of the most lopsided shutout losses in the modern era of the major leagues.1

Their opponents that day, the Tigers, were in third place, where they’d finish the season. While they featured only one .300 hitter among the regulars, shortstop Kid Elberfeld (.308), collectively the Tigers ranked third in the league in hitting that season and were just above the league average in runs scored with 742. Collectively, Tigers pitchers ranked third in fewest runs allowed (696) and ERA (3.30). Their mound corps was led by Roscoe Miller, who finished the season among the top 10 in wins (23), ERA (2.95), and WHIP (1.316), among other categories.

For the September 15 contest, the Tigers’ home finale for the year, the teams met at Burns Park in Springwells Township, outside the Detroit city limits, where the team played its Sunday games as a means of circumventing municipal blue laws that prohibited sporting events in Detroit on Sundays. With the weather fair, an estimated 4,100 fans turned out.2

As his starter, Detroit manager George Stallings sent 26-year-old rookie southpaw Ed Siever to the mound. Described by contemporaneous observers as “portly” and as having “terrific speed and deadly control,” Siever was in his third professional season, and had been a member of the Tigers in 1900, when the American League was still considered a minor league.3 Siever finished 1901 at 18-14 with a 3.24 ERA, with 85 strikeouts and 65 walks in 288⅔ innings. Coming into the September 15 contest against the Blues, he had already faced Cleveland five times, winning four.4

For their part, the Blues sent 20-year-old rookie right-hander Jack Bracken to the hill. Then in his first professional season, Bracken had joined the Blues in early August after manager Jimmy McAleer saw him pitch for an amateur team based in Kent, Oho, where he reportedly won 12 of his 17 starts.5 He had made his major-league and professional debut at home against Milwaukee on August 7, gaining a 5-4 victory when he slugged a two-out, two-run double down the left-field line that reportedly hit the chalk, barely fair.6

After Bracken also won his second start, defeating the Chicago White Sox 4-3, his early success was enough that one Ohio sportswriter was moved to compose a poem celebrating him and portending greatness, reading, in part:

“Who was it who mowed Milwaukee down?

Who crazed the fans of Cleveland town?

Who gave to Kent such great renown?

But Bracken’s performance in the September 15 meeting with the Tigers made clear that the writer’s early enthusiasm was premature.

While existing play-by-play accounts of the game are spare, the game story in the Detroit Free Press said that the Tigers got to Bracken quickly, jumping out to a 2-0 lead by the Tigers’ fourth batter in the first: Bracken walked leadoff batter Jimmy Barrett and then gave up a double to Ducky Holmes; both came in on a single by cleanup hitter Kid Gleason.8 The Tigers ended up scoring in every inning but the second, plating two more in the third, four in the fourth, three in the fifth, six in the sixth, and four in the seventh.9 Reportedly Bracken was so disgusted by his performance that he tried to walk off the mound in the middle of the six-run sixth inning but Blues captain LaChance “made him take his medicine and stick until the umpire finally relieved him by calling the game” in the seventh inning because the score was so lopsided.10 By that point, he had given up 21 runs on 23 hits and three walks, while striking out none.11 The score could have been even worse except that in that horrendous sixth the Tigers’ Kid Elberfeld was thrown out trying to stretch a single into a double.12 The Cleveland Plain Dealer summarized Bracken’s effort succinctly: “The least said about the Detroit scoring, the better.”13

Meanwhile, Siever was dispatching the Blues with relative efficiency, scattering only five singles, while walking one and striking out three.

He also benefited from some superb defensive play behind him. In the fourth inning Barrett robbed Erve Beck of an extra-base hit when he caught a fly ball at the center-field wall, and in the fifth Holmes, playing right field, “made a fine running catch … coming in at full speed and taking the ball almost at … second [base]. … [He] rolled over after making the catch, but held on.”14 The most spectacular play, however, was by left fielder Kid Nance on “a terrific drive from Beck’s bat in the sixth. The ball seemed to be sailing over Nance’s head, but he leaped into the air and batted the ball down with his glove-protected hand and then caught the ball with his other hand. Tom] Donovan who was on second … had started for home and was easily caught before he got back to the bag.”15 The crowd “almost went wild with enthusiasm” and implored Nance to tip his cap in response to their cheers, but he “would not answer to the request.”16

After that debacle, Bracken did not last much longer in the major leagues: He made his last appearance for the Blues on September 27, a 14-6 loss to the Philadelphia Athletics, who “tore the hits off Mr. Bracken’s delivery”; in giving up the 14 runs, he allowed 16 hits, five for extra bases, including a home run by Nap Lajoie.17 When the Blues did not re-sign him for 1902, Bracken played in an independent league that season and then spent one year, 1904, in the minors before retiring as a player. After that, he worked as a scout for the Cleveland Indians until 1949, when he left baseball for the oil industry as a sales representative in Detroit, where he died in 1954.18 His final line for his brief stay in the major leagues: 4-8 with a 6.21 ERA.

Siever, on the other hand, had a superb season in 1902, leading the American League with a 1.91 ERA, though the year was not without its frustration: Pitching for a poor Tigers team that finished seventh largely because of an anemic offense that finished last in the league in runs scored, Siever ended up with a sub-.500 record, going 8-11. He was later an 18-game winner for the Tigers in their pennant-winning 1907 season, but after a mediocre start to his 1908 season, he wound up in the minor leagues, where he stayed until he retired as a player after 1910. In 1914, when he was working for the Detroit public works department, Siever fell into manhole, breaking a leg in five places. As he had “no means of support,” the Tigers staged a benefit game for him.19 Siever died of a heart attack on February 4, 1920, while he was at work; he was 44.20

Beyond the sources cited in the endnotes, the writer also consulted Baseball-Reference.com, Retrosheet.org, and the SABR Biography Project.

4 Ibid. The article notes that Siever faced Cleveland six times in 1901, winning five of them; the September 15 game was the last that pitted the teams against each other that season.