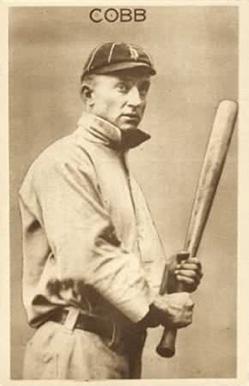 Through games of September 15, 1915, Ty Cobb of the Detroit Tigers led the major leagues in runs, hits, stolen bases, and batting average, and his team was in second place in the American League, two games behind the Boston Red Sox. The rivals met in Boston for a four-game series, and 21,897 fans packed Fenway Park for the series opener on Thursday, September 16, despite sweltering 100-degree heat. The Boston rooters came to boo and hiss Cobb, the Red Sox’ nemesis. The starting pitchers for this game were George “Hooks” Dauss for the Tigers and George “Rube” Foster for the Red Sox.

Cobb knocked in the first run with his first-inning single and scored on Bobby Veach’s single to give the Tigers an early lead. Detroit added another run in the fourth inning; Harry Hooper, the normally sure-handed right fielder, dropped Sam Crawford’s line drive for a two-base error, and Ralph Young singled to send Crawford home. Meanwhile, Dauss allowed just one Boston hit over the first four innings.

After Oscar Stanage singled to lead off the fifth inning, Foster hit Dauss in the arm with a pitch. Donie Bush advanced the runners with a well-placed sacrifice bunt, and Oscar Vitt chopped a ball through a drawn-in infield to bring in two more Detroit runs. The Red Sox scored a run in the bottom of the inning on two singles and an error, and after five innings the Tigers led 5-1.

Carl Mays took the mound for the Red Sox in the sixth inning. He was a 23-year-old rookie who flung the ball with an underhand or “submarine” motion. Mays was like Cobb – fearless and combative.

Neither team scored in the sixth or seventh inning. Cobb led off the eighth, and the first pitch from Mays was directed toward his head. Cobb evaded the missile, righted himself and stepped back into the batter’s box. The second pitch was another beanball that narrowly missed Cobb’s head. Angered by the headhunting, Cobb threw his bat at Mays, but missed his target. The partisan fans howled at Cobb, while he cussed at Mays.

Mays would not back down. His third pitch came in on Cobb, but only nicked his wrist, and Cobb was awarded first base. Cobb would not back down either. Veach came to bat, and on the first pitch, Cobb swiped second base – his 85th stolen bag of the season. Veach sacrificed to move Cobb to third. Crawford grounded the ball to shortstop Everett Scott, who threw home to get the advancing Cobb, but umpire George Hildebrand declared him safe in a debatable call at the plate. The crowd’s outrage rose to a fever pitch.

Dauss silenced the Boston bats. Del Gainer, pinch-hitting for Scott, led off the ninth inning with a single and a stolen base, but Dauss retired Tris Speaker, Dick Hoblitzell, and Larry Gardner to seal a 6-1 Detroit victory.

After Cobb caught Gardner’s fly ball in deep center field for the final out, about 1,000 unruly fans descended from the bleachers, poured onto the field and headed toward Cobb. The danger was immediately apparent. Cobb could have run, but that was not his style; he walked, in a dignified and deliberate manner. Someone threw a pop bottle that glanced off him. Two policemen rushed to the scene and acted as bodyguards, and the Tigers, several carrying bats, ran to their teammate to provide added protection. The victorious visitors marched as a group past jeering Bostonians to the safety of the clubhouse.

The author relied on game descriptions appearing in the September 17, 1915, issues of the Detroit Free Press, Boston Globe, and New York Times.