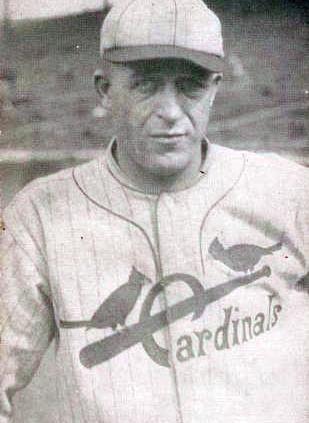 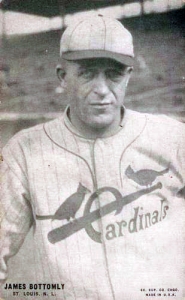 Hall of Famer Jim Bottomley was nicknamed Sunny Jim for his happy disposition, and he had a lot to smile about on September 16, 1924. Bottomley went 6-for-6 and drove in 12 runs that day for the St. Louis Cardinals in their 17-3 win over the Brooklyn Robins, setting the major-league record for RBIs in a game.

It was the opener of a three-game series at Ebbets Field and the weather “was partly sunny and pleasant with an afternoon high temperature of 70 degrees.”1 The Cardinals were in the midst of a four-city road trip and had lost their previous two games at the Polo Grounds to the New York Giants. The Robins were entering their third straight home series and had won four of their last five and 33 of their last 41 games. St. Louis came in with a 59-83 record, while Brooklyn was 86-57.

The starting pitcher for the Cardinals was Bill Sherdel, who was normally a reliever. Sherdel made 35 appearances in 1924, only 10 of which were starts. He was a dependable St. Louis arm for 14 years, appearing in 465 games for the Cardinals, still the third-most in team history. Robins rookie Rube Ehrhardt, who also split the season between the bullpen and the rotation, got the start for Brooklyn.

St. Louis led 5-1 with one out and the bases loaded in the top of the fourth when Bottomley stepped to the plate to face reliever Art Decatur. Bottomley belted a grand slam, one of at least five grand slams in his career, giving the Cardinals a 9-1 lead. At the end of four innings, Bottomley was 3-for-3 with seven RBIs.

In the sixth inning, with the score still 9-1, Bottomley hit a two-run homer in the Cardinals’ four-run rally. It was Bottomley’s second home run of the game and his 14th and final homer of the season. At the end of six innings, the Cardinals led 13-1 and Bottomley was 4-for-4 with two home runs and nine RBIs.

Bottomley’s two-run single to right field in the top of the seventh gave the Cardinals a 15-1 lead. At the seventh inning stretch, he was 5-for-5 with 11 RBIs.

Both teams scored once in the eighth, making the score 16-2 when the Cardinals came to bat in the top of the ninth. Rogers Hornsby tripled to begin the frame and was replaced by pinch-runner Ray Blades. Bottomley came up for his sixth and final at-bat and singled home Blades to make it 17-2. Bottomley finished the day 6-for-6 with two home runs, a double, three runs scored, and a major-league record 12 RBIs.

After Brooklyn scored a hopeless run in the bottom of the ninth, the final score was Cardinals 17, Robins 3. Hall of Famer Bill Klem was the home-plate umpire for the historic game, which was witnessed by 7,000 fans and took 1 hour and 55 minutes to complete.

Sherdel was the winning pitcher, Ehrhardt took the loss, and Flint Rhem pitched the bottom of the ninth for the Cardinals and was given a save retroactively years later. Rhem entering a game with a 15-run lead and pitching one inning wouldn’t earn him a save in 2021, but websites and encyclopedias credit a pitcher with a backdated save in games played from 1920 to 1949 if a pitcher “finished a game his team won, but did not get the win himself.”2

The Cardinals piled up 18 hits in their 14-run win. Sherdel went 3-for-4 with a walk in the ninth spot in the lineup. Hornsby went 2-for-4 with a walk, raising his batting average to .427. He finished the season with a .424 average to lead all major leaguers. Chick Hafey and Heinie Mueller had two hits each for St. Louis. Every Brooklyn pitcher (Ehrhardt, Bonnie Hollingsworth, Decatur, Tex Wilson, and Jim Roberts) allowed at least one run.

New York Daily News reporter Jack Farrell blamed the Robins more than he credited the Cardinals, opening his game story with “What shame! What disgrace; 17 to 3! No, gents, your observer is not broadcasting the result of a polo match but the outcome of the Robin-Card debacle yesterday at Ebbets [F]ield, in which the so-called potential pennant contenders were hanged, drawn and quartered.”3

The St. Louis Star and Times staff was still trying to confirm that Bottomley’s 12 RBIs were a record when the paper went to print, writing, “Bottomley’s part was to achieve what is probably an all-time record by hitting in 12 runs during the afternoon.”4

The lopsided loss was personal for Robins manager Wilbert Robinson because it was his single-game RBIs record that Bottomley broke. Robinson drove in 11 runs for the Baltimore Orioles in their 25-4 win over the St. Louis Browns on June 10, 1892.

Bottomley’s record was untouched until fellow Cardinal Mark Whiten tied it on September 7, 1993, in Cincinnati against the Reds. Whiten went 4-for-5 with four home runs and 12 RBIs in the Cardinals’ 15-2 win in Game Two of a doubleheader that night at Riverfront Stadium. Bottomley was mentioned in hundreds of newspapers across the country the next day in articles about Whiten’s performance. As of March 2021, Bottomley and Whiten were the only major leaguers to drive in 12 runs in a game. Bottomley’s six hits are still tied for the most by a Cardinals player in a single game.5

The Robins finished the 1924 season 92-62, in second place, 1½ games behind the pennant-winning Giants. The Cardinals finished 65-89, in sixth place, 28½ games off the pace. It was Branch Rickey’s final full year as Cardinals manager; he transitioned to the front office after Hornsby replaced him as manager 29 games into the 1925 season.

Bottomley was the National League MVP for the Cardinals in 1928 and stayed with the team through the end of the 1932 season. He played in the 1926, 1928, 1930, and 1931 World Series for the Cardinals, helping them win titles in 1926 and 1931, appearing in all seven games of both of those fall classics. He had a three-year stint with the Reds and two years with the Browns before ending his playing career in 1937 at age 37. He was the Browns’ player-manager for the final 78 games of the 1937 season, his only time as a major-league manager. Bottomley managed the Double-A Syracuse Chiefs, a Reds’ affiliate, in 1938, and then left baseball.

Bottomley returned to the game in 1955 as a scout for the Chicago Cubs.6 He managed the Class D Pulaski Cubs in 1957 but had to leave the team because of a serious health scare on Opening Night in Bluefield, West Virginia. “Bluefield and the visiting Pulaski baseballers battled through nine innings to an 8-8 deadlock in a game halted by the league curfew here last night,” the Kingsport (Tennessee) Times wrote the next day. “The excitement of the finish was a bit too much for Sunny Jim Bottomley, the old St. Louis great and one-time National League’s leading batsman who manages the Pulaski kids. Sunny Jim suffered a slight heart attack as the game ended.”7 Bottomley recovered from the heart attack, left the Cubs organization, and moved to Sullivan, Missouri.

On December 11, 1959, Bottomley died of a heart attack inside his parked car outside a St. Louis store while on a Christmas shopping trip. He was 59 years old. “Mr. Bottomley had been under a physician’s care for several years because of a heart condition and anemia and had been hospitalized for treatment on two occasions in recent years,” the St. Louis Globe-Democrat reported.8 Bottomley’s 12-RBI feat led some obituaries the day after his death. “James (Sunny Jim) Bottomley, who drove in a record 12 runs in one game and figured in the closest race for a batting title in major league history, died suddenly yesterday of a heart ailment,” United Press International’s tribute began.9

Bottomley was inducted into the National Baseball Hall of Fame in 1974. His signature game is immortalized on his plaque in Cooperstown. The plaque’s text reads, in part, “Established record by batting in 12 runs in one game.”