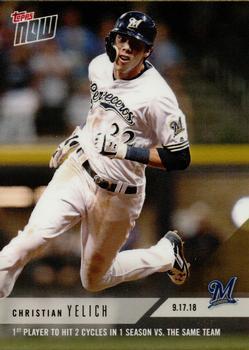 Yogi Berra once said, “It’s déjà vu all over again.”1 For the second time in less than three weeks, Milwaukee’s Christian Yelich had a perfect day at the plate while hitting for the cycle. Further, this accomplishment was against the same team (the Cincinnati Reds) victimized by his first cycle, which took place on August 29.

Yelich had been drafted by the Florida Marlins in the first round (with the 23rd overall pick) of the June 2010 draft.2 After five seasons with the Marlins, he was traded to Milwaukee in January 2018 for Lewis Brinson, Monte Harrison, Isan Diaz, and Jordan Yamamoto. The 2018 season turned out to be a break-out year for Yelich.

Brewers lefty Wade Miley (4-2, 2.23 ERA) started the opener of a three-game series at Milwaukee’s Miller Park, a Monday-evening contest in front of 32,145 fans. Miley, a free agent signed by the Brewers in the offseason, was hoping to close Milwaukee’s 2½-game gap with the first-place Chicago Cubs.

Miley had won his previous two starts (both against the Cubs). He was opposed by Cincinnati’s Anthony DeSclafani (7-5, 4.80), a right-hander. The Reds were resigned to the fact that they would finish the 2018 season in the NL Central Division basement. Their 64-86 record put them 23½ games behind Chicago.

After the visiting Reds were retired in order to start the game, Milwaukee threatened with a pair of singles by Yelich and Travis Shaw in the home half of the first, but DeSclafani worked out of the jam. In the second, Cincinnati collected singles by Phil Ervin and Curt Casali, but Miley left the runners stranded.

The Brewers broke the scoreless tie in the bottom of the third. Curtis Granderson drew a one-out walk. Yelich dropped a double just past first base, and Milwaukee had two runners in scoring position. Lorenzo Cain lifted a pitch into right field for a sacrifice fly, and Granderson scored.

Miley had faced 21 batters through the first five innings, throwing 83 pitches. Milwaukee manager Craig Counsell inserted Domingo Santana to pinch-hit for Miley to open the bottom of the fifth inning, and Santana blasted his fifth home run of the season. It was his second pinch-hit homer in as many games.3 Granderson then lined a single to right. Yelich swung at DeSclafani’s first pitch and drove it deep over the wall in right for a two-run homer (his 31st of the year). The Brewers had built a 4-0 lead.

In the sixth inning, the Brewers sent eight batters to the plate. Left-hander Wandy Peralta replaced DeSclafani on the mound for the Reds. Mike Moustakas greeted Peralta with a double into the right-center gap. After Erik Kratz lined out, Orlando Arcia doubled to left-center, plating Moustakas.

Peralta had thrown just six pitches, but his skipper, Jim Riggleman, made a change, bringing in rookie righty Jesús Reyes in relief. This was just the third big-league appearance of Reyes’ career.4 Jonathan Schoop pinch-hit for Josh Hader (who had taken over the mound duties from Miley). Reyes uncorked a wild pitch, allowing Arcia to advance to third. Schoop then grounded a ball to third baseman Eugenio Suárez, who mishandled the ball for an error.5 Schoop was safe and Arcia scored.

Granderson drew a walk, his second of the game, bringing up Yelich. He lined a 1-and-2 pitch into right-center. The ball rolled to the wall and Yelich never broke stride as he rounded the bases. Schoop had scored, and the relay from center field was thrown home, trying to catch Granderson at the plate (he was safe). Yelich slid uncontested into third base, completing the cycle. When he returned to the dugout, the fans gave him a standing ovation and chanted “M-V-P.”6 It was the second cycle of his career – less than three weeks after the first. Milwaukee’s lead was 8-0.

Brandon Woodruff became the third Brewers hurler and finished the game, pitching three scoreless frames for his first save in the majors.7 Cincinnati threatened in the ninth, getting three hits, but a timely 5-4-3 double play helped Woodruff escape without allowing a run.

The Brewers had blanked the Reds, 8-0. It was the sixth consecutive game in which Cincinnati scored three or fewer runs. It was also the 11th shutout of the season for the Reds offense. They proceeded to lose eight of their final 11 games of the 2018 campaign, including three more shutouts.

Meanwhile, the Brewers were peaking at the right time. Milwaukee won nine of its final 11 games, including eight in a row to close the regular season, claiming sole possession of the Central Division lead on the final day of the season.

With his 4-for-4 performance, Yelich had hit for the cycle, becoming the ninth Brewers batter to accomplish the rare feat. (He was also the eighth batter on the Brewers’ list, from his August 29 game.) Counsell replaced Yelich in the bottom of the eighth, when Hernán Pérez entered as a pinch-hitter and stayed in to play left field. Yelich had scored a run and driven in four runs as well, and he began an eight-game hit streak in this game. His batting average had jumped to .318, and he produced six more multi-hit games, finishing the year with a .326 mark (which led the National League8) and a 1.000 OPS. (His .598 slugging percentage was also best in the NL.) He was named winner of the 2018 National League’s Most Valuable Player Award (with 29 of 30 first-place votes).

Yelich seemed to be zeroed in on Reds pitching. In 12 games against Cincinnati (including this game), he had collected 24 hits, 7 home runs, and 17 runs batted in, and scored 12 runs. He finished the season batting 27-for-56 (.482) with 14 extra-base hits against Cincy hurlers.

Christian Yelich became the fifth major leaguer to hit for the cycle twice in the same season – and the first to accomplish the feat against the same opponent.9 When informed of his record, Yelich told reporters, “There’s been so many great players to play this game. It just shows how freaky, I guess, that is.”10 He added, “I don’t know how to describe it. It’s nice to do it at home, too, in front of the home fans.”11

4 Reyes pitched in only five games (just 5⅔ innings) in the major leagues, all with Cincinnati in 2018.

5 This was the second error of the game for Suarez. He had made a throwing error in the fourth inning on a grounder from Arcia.

7 As of the end of the 2020 season, Woodruff, who became a regular member of Milwaukee’s starting rotation in 2019, still only had one career save.