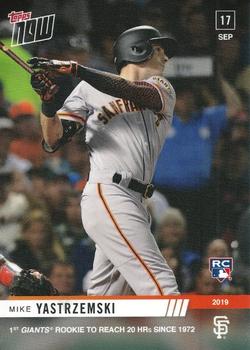 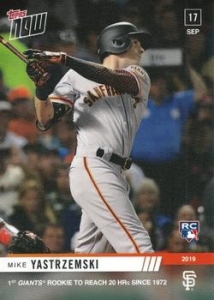 Carl Yastrzemski was legendary in Boston — and throughout baseball. In his 23-season Hall of Fame career with the Red Sox, he made 18 All-Star teams, and won three batting titles, seven Gold Gloves, and the 1967 Triple Crown before retiring in October 1983.

Two generations later, the Yastrzemski name returned to the majors.1 His grandson, Mike Yastrzemski, debuted on May 25, 2019, with the San Francisco Giants, at age 28, nearly six years and 703 minor-league games after the Baltimore Orioles selected him from Vanderbilt University in June 2013.2

By September 2019 Mike Yastrzemski was starting often in the Giants outfield, mostly splitting time between left field and right field. As scheduling luck would have it, the Giants were playing an interleague series in Boston on September 17-19.3 In the series opener, Giants manager Bruce Bochy had Yastrzemski in left field — his grandfather’s most frequent position — batting leadoff.

A Yastrzemski would be playing again at Fenway, 36 years after Carl played his last game there. Before the game, grandfather and grandson walked the field together.4 Mike got practical, expert advice for playing in front of Boston’s iconic Green Monster. “Take balls in batting practice, because no fungo is going to simulate the ball that’s going to be hit live if it’s hit off that wall.”5 Carl did not stay for this game — he was too nervous and wanted the night to belong to Mike.6

Boston’s starting pitcher was Nathan Eovaldi (1-0, 5.81 ERA). His one win was earned in relief, so he was the holder of a dubious record: the most consecutive no-decisions in Red Sox history.7

Mike Yastrzemski, whose elbow guard sported a bright yellow “YAZ!,” led off. He was cheered by the local fans and the substantial number of Giants fans among the crowd of 35,925. He struck out swinging at a high fastball at 99 MPH.

Brandon Belt followed with his 17th home run of the year, bouncing it off the edge of the Green Monster into the seats for a 1-0 Giants lead.

Rookie Logan Webb (1-2, 6.75 ERA) was making his sixth career start for the Giants. He retired the Red Sox in order in the first.

Eovaldi worked in and out of trouble in the top of the second. He collected two strikeouts, but Brandon Crawford singled and Austin Slater broke a 5-for-37 slump with another single, to put runners on first and second. But Eovaldi fielded Mauricio Dubón’s dribbler toward the mound for the third out.

Webb was lucky to escape the second with only one run scoring. One-out walks to Brock Holt, Mitch Moreland, and Christian Vázquez loaded the bases. Jackie Bradley Jr.’s single scored one, but that was all Boston managed. Marco Hernández grounded to third — the Giants got the force out at home. Andrew Benintendi flied out to end the inning.

The Giants took the lead in the third. Yastrzemski and Evan Longoria walked. The Red Sox pitching coach paid a visit to the mound, prompting home-plate umpire Joe West to amble out to speed things along. The visit didn’t help. Stephen Vogt hit a one-out double into the right-field corner scoring one; Kevin Pillar’s groundout scored another; Crawford’s single gave the Giants a 4-1 lead.

Webb worked a clean bottom of the third.

Mike Yastrzemski stepped to the plate with two out in the fourth and added his name to Fenway Park history. His 20th home run flew 401 feet into the center-field stands. The crowd cheered as loudly as if it had been a Red Sox homer.8 The Giants had a 5-1 lead.

Webb induced three groundouts on nine pitches for a quick bottom of the fourth.

Colten Brewer replaced Eovaldi on the mound in the fifth, beginning the parade of relievers. He worked a clean inning with two strikeouts.

Bradley led off the bottom of the fifth with his 19th homer of the season, clearing the visitors’ bullpen. It was only the second Red Sox hit of the game, and it cut the deficit to 5-2.

Bobby Poyner, the third Red Sox pitcher, allowed no hits in the top of the sixth. It wasn’t easy, though — he had a 10-pitch battle with local kid Dubón9 but finally got the fly out.

The Red Sox tied the game in the sixth. Sam Travis, pinch-hitting for J.D. Martinez,10 was credited with a triple when the ball tipped off right fielder Slater’s glove and bounced into the corner. Unfortunately for Travis, the relay throw hit his head as he slid into third. He walked off under his own power but was removed from the game.11

Former Giant Gorkys Hernández was the pinch-runner; he stayed in the game as the designated hitter. Bochy started his parade of relievers with Andrew Suárez, who gave up the tying runs. Moreland lined a one-out double into the left-field corner, easily scoring Hernández. Vázquez’s ground-rule double scored another run. Vázquez stole third and scored on a passed ball. Hernández singled, but Benintendi lined out to leave the game tied.

The score stayed 5-5 for the next six innings. In those innings, the Red Sox used six relievers, who gave up three walks, two singles, and no runs. Six Giants relievers allowed three walks, four singles, and no runs. Both teams had taken advantage of the September roster expansion to 40 men.12 Mike Yastrzemski put his grandfather’s advice to good use, holding Donovan Solano to a single in the 10th by playing a carom off the Monster.

The crowd had also thinned considerably and consolidated as the fans took advantage of the extra-inning ability to move to better seats.

Scoring resumed in the top of the 13th. Pillar, hitless in five at-bats so far, smacked a base hit. Crawford bounced one off the bottom of the Monster, and Benintendi bobbled the ball in left. Pillar, who was rounding second when he saw the bobble, turned on the jets and was waved home by the third-base coach for the go-ahead run. Crawford tried to take third but was out when he slid too late and couldn’t hold the bag, which rendered Solano’s13 subsequent single harmless. Slater struck out and Dubón flied out as the clock struck midnight.

The remaining crowd stirred hopefully as the Red Sox came to bat in the 13th. Bochy sent in Sam Selman (he had used his closer, Will Smith, in the 10th), but choosing a reliever with a 6.00 ERA and six innings of major-league experience did not work out well. Bradley struck out, but Hernández singled and Benintendi walked.

A visibly frustrated Bochy called for Burch Smith, who allowed a single to Xander Bogaerts to load the bases. Bochy switched to lefty Wandy Peralta to face Rafael Devers, another lefty. That move worked — Devers struck out for the second out.

Next, Bochy tried Kyle Barraclough to face Juan Centeno, the new designated hitter. Barraclough could not find the strike zone and walked in a run, tying the game, 6-6. Perhaps the visit from the Giants’ pitching coach helped — Bochy stayed with Barraclough rather than make a fourth pitching change. Holt grounded out, spiking his helmet in frustration as he crossed the first-base bag.

Fourteenth inning, game tied, well past midnight, and the managers tied the major-league record for pitchers in a game. Neither team scored in the 14th, although Mike Yastrzemski was soundly cheered for his ground-rule double, which bounced in the center-field triangle and into the stands. He stumbled out of the box but ran out the double.14 The teams used three more pitchers in the 14th, matching the record number of pitchers used in a Rockies-Dodgers game on September 15, 2015.15

The remaining hardy fans, the bench players, and coaches were showing the effects of the hour. The bench players were resting their heads on their arms on the dugout rail. The exception was Bochy, in the final month of a 25-season managerial career — he rarely settled on the bench, scowling and pacing in the dugout as his relievers couldn’t throw strikes. Red Sox manager Alex Cora calmly took in the game from his dugout steps.

After facing one batter in the top of the 14th, Trevor Kelley — Boston’s 11th pitcher of the game — pitched the 15th, allowing what turned out to be the Giants’ winning run. The wind had picked up, blowing in from left-center. Solano hit what looked like a catchable bloop into short right, but the wind blew the bounce into the stands for a ground-rule double. He took third on a wild pitch and scored on pinch-hitter Alex Dickerson’s sacrifice fly. Dubón reached on a throwing error by Bogaerts, but Mike Yastrzemski popped up to short to end the inning. He finished his Fenway Park debut with a home run, double, and walk in eight plate appearances.

Bochy also stayed with his 14th inning pitcher — and 13th pitcher of the game — Dereck Rodríguez. He did, however, bring in the 50th16 player of the game: Mike Gerber replaced Dickerson in right. Rodríguez allowed a one-out walk to Bogaerts. After nearly 300 pitches, Giants catcher Vogt had outlasted his mitt’s laces — he had to get a replacement. When Devers singled to center, the Red Sox faithful hoped for a walkoff. It was not to be: Center fielder Pillar made a diving catch of Centeno’s liner and Holt lined out to second base to end the game, 5 hours and 54 minutes after it started.

This article was fact-checked by Bill Nowlin and copy-edited by Len Levin.

In addition to the sources listed below, the author watched the recorded game on MLB.tv. Highlights available at https://www.youtube.com/watch?v=8hmV6BooODo.

1 Carl’s son Mike played five years in the minors but did not reach the majors.

3 The games had no postseason implications. The Red Sox (79-70) were in third place, 18 games behind the Yankees in the AL East. The Giants (72-78) were also third in the NL West, 24½ games behind the Dodgers. Both teams finished the year where they were — third in their division.

6 Pregame interview on NESN, shown as part of the NESN broadcast of the game.

7 He had nine at the start of the game, and 10 by the end of the sixth inning. Alex Speier, “Another Eovaldi Roller-Coaster Outing Raises Questions,” Boston Globe, September 18, 2019: C2. He finally earned his only win of the year as a starter in his next game, on September 22.

9 Dubón, a native of Honduras and the first Honduran to make the big leagues, had moved to the United States to pursue baseball. He had been drafted by the Red Sox in the 26th round in 2013, worked his way up the Red Sox system, then made his way to the Giants via trades. Alex Speier, “Fenway Trip Also Took Dubón Back to His Roots,” Boston Globe, September 18, 2019: C2.

10 Martinez left with “groin tightness,” per the NESN broadcasters. He was back in the game by September 21, when he played 11 innings.

11 He did not go on the Injured List — he played in the September 22 game.

12 Starting the following year, 2020, the September roster expansion would be to only 28 players, and each reliever must face three batters (or complete an inning). This game would have looked quite different if it had been played a year later. As it was, there was barely room on the bullpen benches for the relievers, all wearing their bulky jackets in the cool fall weather.

13 Solano had taken over as DH from Shaw in the eighth.

14 After being checked by the trainer, he stayed in the game.

15 The record stood for about a week: On September 24, 2019, the Giants and Rockies used 25 pitchers in a 16-inning game. Craig Calcaterra, “Giants, Rockies Set Record for Most Pitchers Used in a Game,” mlb.nbcsports.com, September 25, 2019.

17 This was Bochy’s 1,999th career managerial victory. He got his 2,000th victory later that day, 11-3 in the second game of the Boston series. He had announced that he would retire after 25 years at the end of the season. The San Francisco broadcasters also mentioned that he had a chance to chat with his idol, Carl Yastrzemski, in the visiting manager’s office before the game.