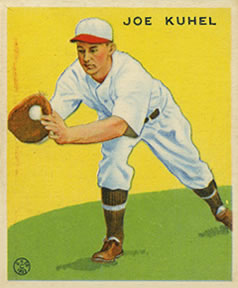 With two weeks left in the season, the Senators were playing their last scheduled home game at Griffith Stadium. This oddity of the calendar was thanks to owner Clark Griffith, who had rented out the stadium to the NFL’s Washington Redskins for the rest of September.1

Most years, fans might not have minded missing out on chilly, meaningless late-season games. But the 1945 Senators had come from nowhere to make their first challenge for a pennant in 12 years, staying within three games of the league-leading Detroit Tigers for the entirety of September.

The excitement was out of proportion with the quality of play in the major leagues in 1945. While teams awaited the return of many of their regulars from wartime service, “baseball endured,” wrote Rob Neyer, “thanks to rosters stocked with baby-faced rookies, grizzled old minor leaguers, and ‘4-F’ ballplayers (ruled) physically unfit for service.”2

The Senators faced the team they wanted to play most, the Tigers, to close out their premature final homestand in a five-game series – two doubleheaders, thanks to their penurious owner, followed by a makeup of a rainout in May.

Trailing by 2½ games, the home team crippled its own cause by losing three of the first four to Detroit. Washington absolutely had to win to stay in the race, but in order to win, it needed to play. After the makeup game was itself rained out on Monday, September 17, the Senators would play it Tuesday – come hell, or, as the forecast threatened again, high water.

Griffith, pictured in the Washington Post holding an umbrella and lifting a tarp on Monday to inspect what the Post called a “chocolate pudding infield,” insisted on a Tuesday start time of 2:00 P.M. to accommodate potential rain delays.3 He had the grounds crew burn oil on the infield to try to dry it out.4

Only 5,720 fans showed up in the weekday afternoon gloom, a fraction of the 20,000 or so the Washington Grays expected for their Negro League World Series matchup with the Cleveland Buckeyes later on in a nightcap at Griffith Stadium.5

The Senators’ do-or-die home finale turned out to be the tale of three games within a game – a blowout, a furious comeback, followed by another runaway.

The Senators enjoyed a thunderous opening inning against Tigers starter Dizzy Trout. After George Case and George Myatt led off with singles, both moved up on a bunt by Buddy Lewis and came home on a triple by Joe Kuhel to give the Senators an instant 2-0 lead.

The Senators kept the pressure on, with Cecil Travis following Kuhel with a double to make it 3-0, and, after advancing on a single by George “Bingo” Binks and a walk to Rick Ferrell, scoring on a base hit by Gil Torres. With the Tigers trailing 4-0, Trout wouldn’t finish the first inning. Stubby Overmire came on and retired pitcher Walt Masterson to get the visitors back to the dugout to lick their wounds.

For a few innings Masterson would deny Detroit their revenge, suffering only a leadoff infield single by Roy Cullenbine in the second inning, then twice snuffing out scoring threats of runners reaching third base with one out.

In the top of the third, Joe Hoover walked and hustled to third on Eddie Mayo’s single to right, only to watch Doc Cramer pop up to shortstop and slugger Rudy York fly out to center.

Masterson inadvertently helped his cause in the bottom of the third. After Ferrell doubled and moved to third on a fielder’s choice, Masterson reached first on an error by Hoover to extend the Senators’ lead to a comfy 5-0.

With one out in the fourth, Jimmy Outlaw singled and advanced two more bases on Bob Maier’s double. But Masterson struck out Paul Richards and induced an Overmire grounder to second to keep the Tigers off the scoreboard.

But in the sixth, a cruise somehow turned into a crisis for the Senators. “Masterson appeared to be breezing to an easy victory when he folded,” wrote Shirley Povich.6

Richards had a chance at redemption, at bat again with a runner on third. He ripped a double down the left-field line to score Cullenbine from third and Outlaw from first and make it 5-2.

Hank Greenberg clubbed a pinch-hit double of his own to score Richards, followed by John McHale’s pinch hit to bring home Red Borom, who was running for Greenberg. It was a game again at 5-4.

Then home plate seemed to shrink to the size of a fingernail for the Washington pitching staff. After Masterson walked Mayo on four pitches and threw ball one to Cramer, manager Ossie Bluege pulled him, his five flawless innings nearly nullified by this two-out rally.

“[Marino] Pieretti came in and walked Cramer on three more pitches,” Povich reported. “York drew four more consecutive balls from Pieretti to force the tying run home and bring Dutch Leonard to the scene. When Leonard’s first pitch to Cullenbine was low, it was the thirteenth consecutive ball called against Washington pitchers.”

Leonard got Cullenbine to line out to Travis at third on the next pitch, ceasing a bases-loaded threat and ending the unraveling of what Povich called “that uproarious sixth.”7 The game was tied.

After the Senators completely collapsed in the sixth inning, though, they confidently regained command in the seventh. Kuhel led off against reliever George Caster with a single to right field, followed by a fielder’s choice and bunt single to load the bases. When Ferrell smacked the ball toward the mound, Caster deflected it off his hand to Skeeter Webb at shortstop.8 Webb’s only play was to first base, recording the out but allowing Kuhel to come home safely.

Desperate, the Tigers brought in Hal Newhouser, in the midst of what would be his second straight MVP season. But after a free pass to pinch-hitter Fred Vaughn, which succeeded by setting up a force out of Travis at home for the second out, Newhouser couldn’t get Detroit out of the jam.

“Newhouser’s first pitch to [George] Case was the pay-off,” Povich wrote. “Case stepped far into the ball and smartly hit a curve into the vast unprotected area of dead right field, and everybody on base scampered home.”9

The Senators exhaled with a 9-5 lead heading into the eighth inning, in which reliever Roger Wolff toppled the Tigers in order. Zeb Eaton took the hill for Detroit in the bottom of the inning and allowed runners to reach the corners with one out. Binks bonked a base hit to left, scoring one, and Ferrell batted one to right with the same result. Vaughn’s fly ball sent Binks home. At 12-5, it wasn’t even worth pinch-hitting for Wolff, who fanned to end yet another big inning.

Wolff teased the Tigers in the ninth with a two-out walk of Cullenbine before Outlaw flied out to Cramer to end the game, and with it the regular season at Griffith Stadium. The Senators had survived.

“[T]he Nats kept their pennant hopes faintly alive … with a last-ditch 12-5 victory at Griffith Stadium,” Povich wrote. “It was hectic.”10

The Senators still had a chance to win the pennant, but it depended on hypothetical, hoped-for losses by their vanquished visitors.

“Washington must now content itself with the meager comfort of mathematical possibilities as far as the 1945 pennant is concerned,” Povich wrote.11 He sized up the situation, figured Washington would need to win out and hope the Tigers faltered, and measured the moral victories in what appeared to be a lost cause.12

12 The Senators would indeed sag down the stretch, losing three of their last five, but so would the Tigers, dropping four of six before Hank Greenberg’s grand slam in the ninth inning of their season finale in St. Louis let them capture the flag.