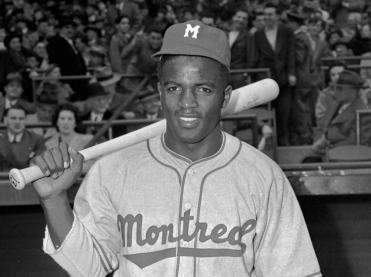 With a 100-54 won-lost record, the Montreal Royals finished the 1946 regular season in first place in the International League, 18½ games ahead of the second-place Syracuse Chiefs. The Royals were affiliated with the Brooklyn Dodgers and were managed by Clay Hopper. The most sensational player in the league was Jackie Robinson, the Royals second baseman. He broke the minor-league color barrier, drew record crowds, and led the league with a .349 batting average.

In the postseason, the Royals played the fourth-place Newark Bears in the first round of the Governor’s Cup playoff series. The Bears were affiliated with the New York Yankees and were managed by George Selkirk, a former Yankee. Newark’s 21-year-old phenoms, shortstop Bobby Brown and catcher Yogi Berra, hit .341 and .314, respectively, during the regular season. They were roommates and a study in contrasts. Brown, who was studying to become a doctor, brought “medical textbooks the size of phone directories with him on road trips,” while Berra preferred comic books.1

After winning the first two games at home, the Royals won one of three games in Newark. The teams returned to Montreal for the sixth contest, a night game on Wednesday, September 18, 1946, with the Royals needing one more victory to win the best-of-seven series. The paid attendance at Delorimier Stadium was reported to be 19,322. The starting pitchers were right-handers Frank Laga2 for the Royals and Duane Pillette for the Bears.

The game was scoreless through four innings; Laga allowed no hits while Pillette escaped jams in the second and fourth innings. But Newark rallied for four runs in the top of the fifth, the result of three singles (by Milt Byrnes, Blas Monaco, and Buddy Hassett), a double by Brown, a base on balls to Pillette, and an error by Robinson. With two outs in the inning, Laga was replaced by right-hander Chet Kehn.

After Pillette walked Marv Rackley and Robinson to start the bottom of the fifth, he was replaced by southpaw Herb Karpel, who had led the International League with a 2.41 ERA during the regular season. Rackley scored on Lew Riggs’ single, and Robinson came home on Les Burge’s sacrifice fly, cutting Newark’s lead in half.

In the seventh inning, Robinson ripped his second double of the game; Riggs’ single sent him to third, and he again scored on a sacrifice fly by Burge.

The Royals entered the bottom of the ninth trailing by a run. “Lefty” Karpel3 retired Robinson and Riggs for two quick outs, and it was now up to Burge, a left-handed batter. What followed was called “the most exciting moment of the season” by sportswriter Dink Carroll of the Montreal Gazette.4

With the count at two balls and two strikes on Burge, Karpel’s next offering was called a ball by home-plate umpire Artie Gore. The pitcher and his teammates were furious at the call, which they felt should have been strike three and the end of the game. On Karpel’s next pitch, Burge homered over the scoreboard in right field to tie the score at 4-4. Karpel then “rushed at Gore and had to be forcibly restrained by his teammate, Johnny Moore. There was a lot of pushing and arguing and finally the harassed umpire ran Karpel, Moore, Jack Phillips and Manager George Selkirk out of the game.”5

Alex Mustaikis, Newark’s “ace fireman,”6 replaced Karpel on the mound. The next batter was Tommy Tatum, who lined a single into left field. Herman Franks followed with a double off the scoreboard, which was retrieved by Frank Colman, a strong-armed right fielder. In the seventh inning, Colman had impressively thrown Riggs out at the plate. Nonetheless, Royals manager Clay Hopper, coaching along the third-base line, sent the speedy Tatum home. Colman’s throw was on the money and in Berra’s mitt ahead of the runner, but Gore called Tatum safe. With that, the Royals won the game, 5-4, and the series, 4 games to 2.

Berra flew into a rage and rushed at Gore, the benches cleared, and even “some of the crowd boiled down out of the stand to take part in the melee. Then came the police and Umpire Gore was escorted off the scene and the riot subsided.”7 Gore said afterwards that Berra had missed the tag.

With the Bears’ season over, the Yankees called up Brown and Berra. They made their joint major-league debuts four days later in the first game of a doubleheader on September 22.

The Royals completed their playoff run by defeating the Syracuse Chiefs in the International League Governor’s Cup finals and the Louisville Colonels of the American Association in the Junior World Series. Hopper was named the Minor League Manager of the Year by The Sporting News.8

Robinson broke the major-league color barrier when he made his debut with the Dodgers on April 15, 1947. In the same game, Gore made his major-league debut as a National League umpire.9

Years later, Berra recalled that last playoff game against the Royals: “We lost the series, and I lost my head against the plate umpire, Artie Gore, on a close play at the plate. I got fined because all hell broke loose after the play, and if I had actually hit him, I might’ve gotten thrown out of baseball. I was lucky, and fortunate, too, since the Yankees actually paid my $500 fine. I also learned a big lesson. If you’re a catcher, you better get along with umpires.”10

2 Laga, 26, had been recently recalled from Mobile of the Class-AA Southern Association. He started in place of left-hander Steve Nagy, out with arm trouble. Dink Carroll, “Umpire Artie Gore Is Victim As Bears Beaten 5-4,” Gazette (Montreal, Quebec), September 19, 1946: 16.

3 Karpel had appeared in two games with the Yankees in April 1946 before being demoted to Newark.

9 Gore was the third-base umpire in a three-man crew.