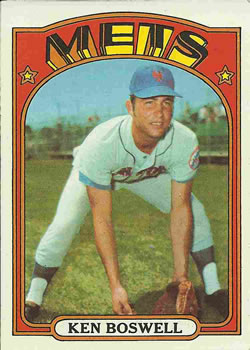 Every team has comebacks.

Miraculous rallies from seemingly insurmountable deficits litter the historical landscape in every major sport. Whether a club ultimately needs that special comeback on their way to a championship, or merely uses it as a springboard for success later in the season, it’s often remembered in team lore as a landmark victory.

However, there are also those miracle games that occur during seasons that aren’t quite as successful and whose outcomes don’t mean as much in the big picture of a full season.

Historically, the New York Mets have experienced their share of the latter. So in a campaign that ended with an 83-73 record and a 13½-game deficit in the National League East standings, their game against the Houston Astros on September 2, 1972, should have been lost deep in the pages of baseball history.

Instead, it will be remembered as one of the biggest comebacks the team ever had.

The 1972 season began with major-league baseball’s first strike, over a dispute regarding the players’ pension fund. By the time the sides agreed on a $500,000 increase for the plan, 13 days at the start of the regular season had been lost. By September 2, the National League standings told a fairly dismal story for both teams: The Mets were already 14 games back of the eventual division-winning Pittsburgh Pirates, while the Astros still clung to a glimmer of hope for a strong finish: They were on a six-game winning streak and trailed the soon-to-be pennant-winning Reds by seven games. As a matter of fact, they knew they could have gained another game that night, as Cincinnati lost to the Montreal Expos.

Houston had pounded the Mets in the Astrodome, 8-0, the night before, handing franchise pitcher Tom Seaver his 10th loss of the season while beating up on a beleaguered Mets bullpen. And amazingly on this Saturday night, the Astros grabbed another 8-0 lead, sparked this time by Lee May’s two-run homer in the first inning, his 28th of the year, a two-run double by Cesar Cedeño in the third inning, and Bob Watson’s two-run single in the bottom of the seventh, as the Astros hammered starter Brent Strom and relievers Ray Sadecki and Bob Rauch, the latter a rookie hurler appearing in his only major-league season. Hence, the Mets entered the eighth inning hopelessly behind for the second consecutive game, as veteran right-hander Don Wilson had shut them down over the first seven innings, facing only 24 hitters and allowing just four hits.

But backup catcher Duffy Dyer, a holdover from the Miracle Mets of ’69 (as was every starting position player in this game except right fielder John Milner), opened the inning with a single to left. Shortstop Bud Harrelson followed with another base hit and utility outfielder Dave Marshall, pinch-hitting for Rauch, walked to load the bases. Center fielder Tommie Agee hit a sacrifice fly to right for the Mets’ first run of the game, which brought up second baseman Ken Boswell, another unheralded contributor to that 1969 team.

Though he had already been responsible for half his club’s hits entering the inning (two singles in three at-bats), Boswell had come into the game batting a paltry .177. “I started out the season not hitting badly, but I always came up empty-handed,” Boswell remarked after the game. “I kept trying to laugh it off, figuring things would straighten out but they didn’t.” They straightened out well enough in this at-bat, however, as Boswell launched his eighth homer of the season, a three-run blast that made the score 8-4. “I think it was a hanging slider,” he guessed. “I was just trying to get it in the air.”1

Though a home run in the midst of a big comeback is often dubbed a “momentum-killer” and the Mets were still down by four runs, a pitching change from Wilson to journeyman reliever Fred Gladding didn’t stop the Mets’ sudden offensive onslaught: Milner immediately collected a single, veteran Met first baseman Ed Kranepool followed with another, and left fielder Cleon Jones doubled in a run, with Kranepool stopping at third. Astros manager Leo Durocher then called for reliever Jim Ray to replace Gladding, but it made no difference as third baseman Wayne Garrett singled in Kranepool and Jones to make the score a suddenly tight 8-7.

Dyer made his second plate appearance of the inning and singled again, but Ray got Harrelson to pop out to the shortstop in foul territory and Marshall to fly out to end the Mets biggest inning of the season. They had scored seven runs on eight hits and were now down by only a single run.

To start the eighth, Mets manager Yogi Berra sent out legendary left-hander Jerry Koosman. Koosman, who had faced three batters in relief the night before, had been sent to the bullpen earlier in the season after three early-season losses because he had “lost his rhythm.” “I literally forgot how to wind up,” he said after his career.2 Koosman got into some trouble, hitting Tommy Helms with a pitch, then giving up a two-out single to Roger Metzger. At that point, Berra called on Tug McGraw, who struck out Cedeño looking.

Now it was their turn again and the Mets offense didn’t miss a beat: Agee walked to start the ninth and Boswell chimed in with another single, his fourth hit of the game. Durocher marched out reliever Tom Griffin, but the Astros’ luck didn’t change as a sacrifice attempt by Milner was fielded by the usually surehanded third baseman Doug Rader, who made a disastrous throw wide of first. The error scored Agee to tie the game, sending Milner to second and Boswell to third.

Durocher then ordered Kranepool walked intentionally to load the bases, but that strategy backfired as well: Jones singled to right to score Boswell and Milner and give the Mets a two-run lead. Kranepool was thrown out at third as Cleon Jones took second and Garrett singled him in. Dyer followed with a strikeout, but even more action followed – Harrelson singled and even McGraw got into the act as he walked to load the bases. Reliever George Culver got Harrelson on a fielder’s choice, however, and the Mets took the field in the ninth with a three-run lead.

With Willie Mays now in center field in one of his last regular-season appearances, McGraw got the side in order in the ninth, closing out the 11-8 victory by getting Watson to ground out to the star of the game, Kenny Boswell.

Boswell, originally from Austin, Texas, said he usually had to have about 30 tickets available for friends and relatives who wanted to see him play when the came to Houston. “but I’ve never been able to do anything. Guess I was trying to impress them (tonight),” he said later.

For Houston manager Durocher it was just one of those games. “Everything they hit was right between somebody,” he lamented after the nightmarish experience. “We got beat with the best we had, so what can you say?”

“It’s about time we find a few holes,” Berra declared.

For Boswell, who actually ended his career with the Astros five years later, it was the night of his life. “It’s nice to know there’s a little left,” the 26-year-old veteran declared. “It’s the kind of a night you dream about.”

In addition to the sources cited in the Notes, the author also consulted Baseball-Reference.com, Retrosheet.org, and the following:

2 Interview with the author, 2008, in Matthew Silverman and Ken Samelson, eds., The Miracle Has Landed (Hanover, Massachusetts: Maple Street Press, 2009), 141.