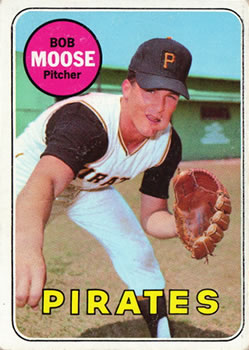 A mood of nervous, anxious excitement permeated Shea Stadium on an abnormally cool 60-degree Saturday afternoon, September 20, 1969, as the New York Mets took on the Pittsburgh Pirates in the third tilt of a five-game series. The Mets were on the verge of a miracle, but a celebration in the Big Apple was far from certain. Beginning on August 16, skipper Gil Hodges’ squad had won 29 of 36 games going into the Pittsburgh series, transforming a 10-game deficit in the newly formed National League East into an unlikely five-game lead for the division crown, overtaking the fading Chicago Cubs.

The Mets had seemed invincible, but “showed they were partly mortal,” opined New York Times writer Leonard Koppett when the third-place Pirates ambushed them in a doubleheader to kick off the series, defeating them 8-2 and 8-0 behind route-going outings by hard-throwing Bob Veale and Luke Walker.1 Despite those defeats, the magic number for the Mets (91-60) to capture their first crown in just their eighth season of existence since losing a major-league record 120 games as an expansion club in 1962 dropped to seven (any combination of Mets victories and Cubs losses) with 11 more games to play as they faced the ever-dangerous Bucs (81-70).

The pitching match-up featured two promising youngsters. The Mets’ 22-year-old rookie right-hander Gary Gentry (11-11, 3.65 ERA) formed the “Big Three” with aces Tom Seaver and Jerry Koosman. Toeing the rubber for the Pirates was right-hander Bob Moose, about three weeks shy of his 22nd birthday. As a rookie swingman in 1968, Moose compiled a misleading 8-12 record that was offset by a robust 2.74 ERA. On June 14, 1968, he came within four outs of tossing the first no-hitter in the 60-year history Forbes Field when he held the Houston Astros hitless for 7⅔ innings before settling for a two-hit shutout. “He’s the reason we traded Jim Bunning,” said Pirates skipper Larry Shepard about Moose’s potential. “We just had to be able to start him regularly. He’s the sort of kid a manager would give a million dollars to have.”2

After tossing complete games to win his first two starts of 1969, Moose struggled and spent much of the season in the bullpen before moving back in the starting rotation in mid-August. With an impressive 11-3 record (3.18 ERA), Moose was coming off two excellent starts, including an overpowering 14-strikeout performance in a victory against Philadelphia and a tough-luck 1-0 loss to the Mets eight days earlier, when he yielded just five hits and a run while fanning 10 in eight innings in the Steel City. “Any way I want to use him I know he’s ready,” gushed Shepard. “He has the ideal temperament for a pitcher.”3

The Shea Stadium crowd of 38,784, plus an additional 16,000 Midget Mets youth baseball players and 2,500 Ladies Day ticket holders, seemed restless. According to Koppett, their “attention was on the Met situation in the pennant race more than on the game itself.”4 Their distraction was excusable. At almost the same time as home-plate umpire Augie Donatelli yelled “Play Ball!” in Queens, New York, the Cubs commenced their game against the St. Louis Cardinals in Wrigley Field.

The first three innings shaped up as a classic pitchers’ duel with only two baserunners. Gentry yielded a leadoff single to Matty Alou and Moose issued a one-out walk in the third to Ed Kranepool, an original Met.

All of that changed in the fourth. “It was the only bad inning Gentry had,” opined Koppett, “but it was plenty.”5 Rookie Dave Cash, subbing for the perennial Gold Glove Award winner Bill Mazeroski at the keystone sack, led off with a walk and moved to second on Willie Stargell’s single to center. With Roberto Clemente at bat, Cash and Stargell darted off in a double steal and slid easily into their respective bases as catcher J.C. Martin dropped Gentry’s offering and did not attempt a throw. After the “Great One” worked the count to 3-and-2, three successive pitches decided the game. Ball four to Clemente was a wild pitch, enabling Cash to score the game’s first run and Stargell to reach third. The next pitch hit rookie Al Oliver on the wrist to load the bases. Stargell dashed home when Gentry unleashed another wild pitch while facing Manny Sanguillen. Emerging as one of the best-hitting catchers in just his first full season in the majors, Sanguillen grounded to third, driving in Clemente to increase the Pirates’ lead to 3-0. Gentry retired the next two batters with Oliver on third.

While Moose mowed down the Mets, the partisan crowd was eerily silent. At Wrigley Field the Cubs maintained a 1-0 lead on the Redbirds as that game also entered the middle innings.

After the game Moose said that he began thinking about the no-hitter in the sixth inning. “That’s when I started checking the lineup on the scoreboard,” said the western Pennsylvania native, who grew up in Export, about 22 miles east of Pittsburgh.6 After pinch-hitter Jim Gosger struck out and Tommie Agee grounded to second, Wayne Garrett connected for the Mets’ first and only hard-hit ball. “When he hit the ball,” admitted Moose, “I thought it was gone, but then I saw the wind hold it up. I knew that if anybody could catch it, Roberto would.”7 Clemente raced to the warning track and made what Koppett described as a “leaping catch” against the right-field wall to preserve the no-hitter.8

The eighth inning saw what the Times called “one of those bizarre climaxes that only the Mets can achieve.”9 As Ron Swoboda struck out for the first out, Shea Stadium burst into a raucous roar as the scoreboard announced that the Cardinals had just scored two runs in the top of the eighth and led the Cubs, 3-1. That news suddenly energized the crowd. The buzz continued even after Moose fanned Martin and Bud Harrelson to end the frame.

After retiring the first seven batters he faced, reliever Tug McGraw gave up one-out singles to Sanguillen and Richie Hebner in the ninth. He then unfurled the Mets’ third wild pitch of the game, with Moose at the plate, allowing Sanguillen to race home for the Pirates’ fourth run.

As fate would have it, the Mets came to bat in the ninth at the same time the Cubs took their last swings against the Cardinals. Moose seemed impervious to the tension of the moment. “The big thing about Moose is that nothing bothers him,” said Pittsburgh pitching coach Vern Law, who had fashioned a 162-147 record in 16 seasons with the Pirates, including a 20-9 record and a Cy Young Award for the world champions in 1960.10 Moose issued his third walk of the game, to Rod Gaspar, to lead off the ninth, then quickly retired Agee on a pop foul to first and Garrett on a grounder to third. “[Moose] was in control at all times,” gushed Koppett about the stocky 6-foot, 200-pounder who kept the Mets guessing all afternoon with a steady diet of fastballs, breaking balls, and an occasional kunckler.11 Moose dispatched Art Shamsky on a slow roller to second to complete the no-hitter in 2 hours and 8 minutes.

As expected, Moose was mobbed by his teammates (and a “few civilians,” reported the Times12) upon tossing the majors’ sixth no-hitter of the season.13 It was just the third no-hitter in Pirates history. The other two were by Cliff Chambers against the Boston Braves at Braves Field on May 6, 1951, and by Nick Maddox versus the Brooklyn Superbas at Exposition Field, in Pittsburgh, coincidentally also on September 20, albeit 62 years earlier (1907).

The Shea Stadium crown stood clapping calmly after Moose’s masterpiece, then began cheering loudly three or four minutes later when the scoreboard flashed the Cardinals’ 4-1 victory over the Cubs. Despite suffering what Koppett considered the “ultimate indignity” of a no-hitter, the Mets saw their magic number drop to six with the Cubs’ loss.14

“I think they must be a little nervous,” said Moose of the Mets. “They say they don’t feel the pressure, but you can’t help feel it some.”15 The Mets hadn’t lost three straight since August 11-13 in Houston, immediately preceding the club’s dramatic push for the crown. The Mets inched closer to the miracle the next day when they swept a doubleheader behind complete games by Koosman and Don Cardwell. Gentry, who picked up the loss against the Pirates, redeemed himself in his next start by tossing a stellar four-hit shutout against St. Louis at Shea to clinch the NL East crown on September 24.

Moose continued his torrid September, winning his final two starts and picking up his fourth save of the season to finish 14-3 with a 2.91 ERA (easily the lowest among starters on the staff) in 170 innings. Seven years later, Moose died tragically at the age of 29 in an automobile accident on his birthday, October 9. A valuable contributor to the Pirates, Moose fashioned a 76-71 record in parts of 10 seasons.

13 The others were by Houston’s Don Wilson, Cincinnati’s Jim Maloney, Montreal’s Bill Stoneman, the Chicago Cubs’ Ken Holtzman, and Baltimore’s Jim Palmer. Wilson’s and Maloney’s came on consecutive days in a Houston-Cincinnati series.