The 1883 American Association season had the closest major-league pennant race then on record, as the Philadelphia Athletics finished first by a single game over the St. Louis Browns. The two teams virtually decided things in St. Louis the next to last weekend of the season.

Such a late-season showdown seemed unlikely in the campaign’s early days. The Athletics led the league with an 18–3 mark at the end of May. St. Louis stumbled in the beginning and had climbed to 11–10 by month’s end, in fifth place and 6½ games back.

From mid-June until the end of July, the A’s and Browns were never separated by more than three games, the Browns taking the lead in late July before giving it back.

The teams were 2½ games apart as the first-place Athletics (63–28) came to St. Louis’s Sportsman’s Park for three games against the 61–31 Browns beginning Friday, September 21.

The opener featured veteran right-hander Bobby Mathews, a newcomer to the A’s that year and in the box for 30 of their wins, against the Browns’ Tony Mullane, pitching for his third team in three years. More than 10,000 people squeezed into the wooden ballyard, a high turnout for the time.

The first game was often a comedy of errors—literally. The 28 fielding miscues by both clubs exceeded the teams’ 24 total hits. The Browns pulled off an inning-ending double play in the first after three errors; second baseman Joe Quest twice dropped throws attempting to nail a runner at second, only to recover to throw out a runner trying to score.

The Philadelphia club built up 6–0 and 9–3 leads but saw the Browns pull to 9–8 entering the eighth. Three Athletics hits and three passed balls by the Browns’ Pat Deasley gave the A’s four runs in their eighth. But St. Louis rallied for three runs, helped by two errors charged to first baseman George Washington Bradley, who was filling in for injured slugger Harry Stovey.

Down 13–11, the Browns appeared to have tied the game when with one out and one on in the home ninth, shortstop Billy Gleason blistered a ball to deep center field. But Bradley, who’d been moved to center after his disastrous innings at first base, made a spectacular over-the-shoulder catch. The next man grounded out to end the game.

With that victory, the Athletics looked toward clinching the pennant before leaving town. George McGinnis started the second game for the Browns, who batted first after having lost the coin toss to determine the matter. He was opposed by right-hander Jack Jones, who pitched only seven games for Philadelphia that year, winning five.

Each team’s scoring mirrored the other’s in the first three innings, both clubs scoring once in the first, three times in the second, and twice in the third. The Browns took the lead in the fifth when right fielder Hugh Nicol led off with a double to left. He moved to third on a passed ball by Jack O’Brien. Second baseman George Strief ’s single brought Nicol home.

From there McGinnis, aided by a solid defense that committed only two errors, stopped the Athletics. The Browns put the game away in the eighth with a pair of runs on a single by Gleason, a double by Charlie Comiskey, and two passed balls that allowed the Browns first baseman to score. The Athletics went down in order in their ninth. The Browns’ 9–6 win set the stage for the rubber game on Sunday.

St. Louis fans could be forgiven for feeling overconfident going into the finale. Their nine would be led by Mullane, certainly due to pitch a better game than on Friday. The A’s would depend on someone the local fans once lionized but now considered a has-been: George Washington Bradley.

Bradley had been the ace of the St. Louis Browns, first of the National Association in 1875, then of the National League in 1876. Bradley had pitched the first NL no-hitter in its initial season. After several stops, he played third when not occasionally pitching for the 1883 Athletics.

Six years after this crucial game, Bradley re-created its atmosphere for a Sporting News reporter. “I remember how the Browns smiled when they heard I was going to pitch. Oh what pie and oh what pudding. When I got in the square, however, it was as though I was born again. ‘Go in, old Brad,’ I heard someone say, ‘and let the folks know you have come to life again.’ Well, I went in and you know the rest.”

Bradley limited the Browns to three hits. En route to a 9–2 victory, his teammates scored two for him right away in the first as Jud Birchall lined one just inside the right-field line, and Stovey, banged up in both previous games, got the first of his three hits, a ground-rule double to right-center. Birchall scored on a groundout and Stovey tallied on a wild pitch.

The Athletics plated three in the fifth to put the game out of reach. With one out, Cub Stricker singled to center, stole second, went to third on a passed ball, and scored when Birchall grounded to Comiskey and Stricker beat the throw to the plate. Comiskey left the bag, but Tom Dolan, catching this game, threw to it anyway, and the ball went into right field. Stovey’s second hit drove home Birchall, and Stovey took second on the throw home. He scored when Fred Lewis dropped Lon Knight’s fly ball.

The score was 6–0 when the Browns finally plated a run in the eighth; but the Philadelphia team came back with a pair in their eighth before the Browns marked once in the ninth.

The victory allowed the Athletics to leave for their final trip of the season, to Louisville, ahead by 3½ games and having clinched no worse than a tie for the league championship. They lost three of four in Louisville, but the one victory allowed them to finish 66–32. The Browns stayed home and swept three from the Alleghenies of Pittsburgh, but still came up one game short at 65–33. 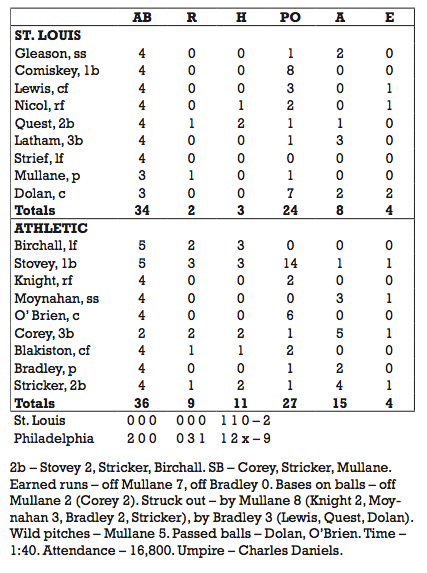