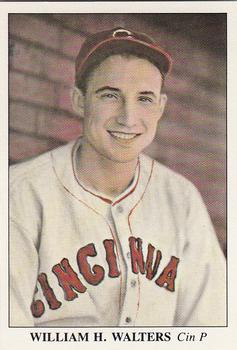 The Cincinnati Reds played the Pittsburgh Pirates in the first game of a three-game series on Friday, September 23, 1938, at Forbes Field in Pittsburgh. With 10 days remaining in the regular season, manager Pie Traynor’s Pirates were in first place in the National League with a 3½-game lead over the second-place Chicago Cubs. The Reds, though, were the surprise of the season; after they finished dead last in 1937, manager Bill McKechnie guided the team into fourth place, only seven games behind the Pirates, through games of September 22.

In June of 1938, the baseball world was riveted by the Reds’ Johnny Vander Meer and his consecutive no-hitters. Meanwhile, the team was bolstered through the acquisition of outfielder Wally Berger and pitcher Bucky Walters, a 29-year-old right-hander obtained from the Philadelphia Phillies. Walters was McKechnie’s choice to start the game of September 23, while Traynor selected Cy Blanton, a 30-year-old right-hander. This was a rematch of the game of June 30 at Forbes Field, in which Blanton outdueled Walters in a 3-1 Pittsburgh victory.

On offense, the Reds were led by outfielder Ival Goodman, who ranked second in the league with 30 home runs; first baseman Frank McCormick, hitting .326 and leading the major leagues in hits in his first full season; and Ernie Lombardi, a catcher leading the NL in batting with a .339 average. The Pirates’ offensive stars were the Waner brothers, Paul and Lloyd; Arky Vaughan, a shortstop batting .329; and Johnny Rizzo, a rookie outfielder hitting .303 with 102 runs batted in.1

It was a pleasant afternoon for the 7,429 fans in attendance, and in the midst of a pennant race, they kept one eye on the scoreboard to see how the Cubs were faring in a doubleheader at Philadelphia.

The first team to score at Forbes Field was the Pirates, who were handed a gift run in the third inning. After Lee Handley led off with a base on balls, Al Todd grounded the ball for what should have been a double play, but shortstop Nolen Richardson booted the ball for one error and threw over the head of McCormick at first base for a second error, allowing Handley to reach third base. Blanton followed with a fly ball to bring Handley home.

The first hit off Walters came in the fifth inning. Pep Young stroked a clean hit into left field which he stretched to a double with an aggressive head-first slide into second base. Blanton then singled up the middle to bring him home.

With two RBIs and five scoreless innings pitched, Blanton was having a fine day. But he came unglued in the top of the sixth. Billy Myers led off by popping a bunt into the air. It fell safely because Blanton and catcher Todd lost it in the sun. Berger followed with a home run over the scoreboard in left. Goodman then beat out a single that glanced off the glove of Young, the second baseman, and scored on Lombardi’s home run to left as the Reds claimed a 4-2 lead.

The Pirates got one back in the bottom of the sixth. Rizzo lined a ball that struck the left-field wall only a foot from the top. He settled for a double and scored when Vaughan tripled to left-center.

With one out in the top of the seventh, Blanton was replaced by Bill Swift, a 30-year-old right-hander, who silenced the Cincinnati bats for 2⅔ innings. The Pirates threatened to tie the score in the bottom of the eighth. With one out, Vaughan drew a walk and advanced to third base on Gus Suhr’s single to right field. But Walters got the 37-year-old Heinie Manush, pinch-hitting for Young, to ground into a 4-6-3 double play to end the threat.

The Pirates’ Handley began the bottom of the ninth with a double off the left-field wall near the foul line. He moved to third on Todd’s sacrifice bunt and came home with the tieing run on Woody Jensen’s fly, pushing the game into extra innings. Jensen pinch-hit for Swift, so Mace Brown, a 29-year-old right-hander, took over on the mound. Brown was considered the best of the Pittsburgh relief pitchers.

The 10th inning was scoreless. Berger led off the top of the 11th by lifting a foul popup:

“The lumbering [catcher] Al Todd turned in the fielding feature of the game in the eleventh when he sprinted in front of the Pirate dugout to make a one-handed catch of Berger’s twisting foul. Al crashed heavily into the dugout, but gamely hung onto the stitched apricot.”2

The Reds squandered an opportunity that inning. McCormick singled to center field with two outs and raced to third base on Lombardi’s single to right, but he overran the bag and was tagged out in a rundown.

Walters struck out the side in the bottom of the 11th inning. He came to bat the next inning with Harry Craft on second base and singled to right field. Paul Waner fielded the ball and fired home to Todd “just a fraction of a second too late”3 as Craft tallied the go-ahead run.

In the bottom of the 12th, Walters retired the Waner brothers and Rizzo in order. The final score was Reds 5, Pirates 4. Walters allowed seven hits in 12 innings and struck out eight for his 14th victory of the season. Brown was the losing pitcher.

Adding to their disappointment, Pittsburgh fans learned that the Cubs swept a doubleheader from the Phillies and were now only two games behind the Pirates.

Though the Pirates defeated the Reds in the second and third games of this series, they lost three straight to the Cubs in Chicago and three of four games to the Reds in Cincinnati to close the season. The Cubs’ victory over the Pirates on September 28 was highlighted by Gabby Hartnett’s famous “homer in the gloamin’.”

The Pirates finished the season in second place, two games behind the Cubs. Author Ronald T. Waldo chronicled the late-season collapse in his 2013 book, Pennant Hopes Dashed by the Homer in the Gloamin’: The Story of How the 1938 Pittsburgh Pirates Blew the National League Pennant.

Game coverage in the September 24, 1938, issues of the Cincinnati Enquirer, Pittsburgh Post-Gazette, and Pittsburgh Press.

1 Season statistics are from Retrosheet.org (accessed November 2017), through games of September 22, 1938.