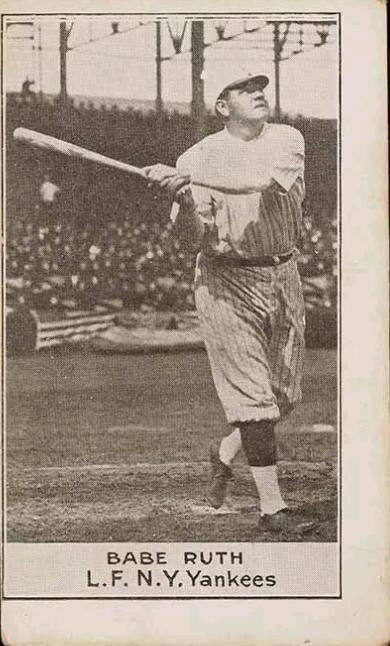 When Babe Ruth was traded to the New York Yankees by Boston Red Sox owner Harry Frazee in January 1920, he was already the most feared slugger in the game. He led the American League in home runs for the first time in 1918 with 11 and in 1919 he established a new single-season record for home runs with 29, surpassing the 35-year-old record of 27 held by Ed Williamson.1 After breaking Williamson’s record, Ruth began to publicly express his home-run goal for the 1920 season: “A half-century.”2

When Ruth first announced he would hit 50 home runs, “wise baseball men tapped themselves on the head, winked an eye and said that Babe was cookoo in the attic.”3 Only two short years earlier, the idea of anyone hitting 50 home runs in a single major-league baseball season was as unfathomable as sending a man to the moon. But this was the start of the Roaring Twenties, a decade of innovation in America, and Ruth was singlehandedly ushering in the Live Ball Era.

With seven games to play, and no remaining games against the front-running Indians, the Yankees were in need of some help as they clung to their slim pennant hopes. They entered the game in third place with a 90-57 record, 2½ games behind the first-place Cleveland Indians and two games behind the Chicago White Sox, who were grabbing headlines as the plot to fix the 1919 World Series was made public for the first time that same day in testimony given to a Cook County, Illinois, Grand Jury.4 Meanwhile, the Senators were 62-78, 27 games off the pace and looking ahead toward the next season.

The Friday afternoon opener featured a pitching matchup between the Yankees’ 28-year-old veteran Carl Mays and the Senators’ 29-year-old rookie José Acosta. Mays, a five-time 20-game winner with 207 career victories, is best remembered for his role in major-league baseball’s only on-field fatality. A little more than six weeks earlier, on August 16, 1920, Mays had thrown the pitch that led to the death of Cleveland shortstop Ray Chapman. The 5-foot-11 right-hander with the submarine delivery entered the game with a record of 25-10 and a 3.15 ERA. Acosta, a right-handed hurler from Cuba, was making just the fifth start of his career. The 5-foot-6, 135-pound Acosta had been with the Senators since July and was 3-4 with a 4.72 ERA.

Ruth’s prediction of 50 was no longer a remote possibility; he had 49 home runs.

An unseasonably warm September afternoon welcomed 28,000 fans who flocked to the Polo Grounds for the primary purpose of seeing Ruth hit his 50th home run, and maybe another, and the secondary purpose of watching the Yankees play a doubleheader against the Senators.5 The large crowd included the band from the St. Mary’s School of Industrial Arts in Baltimore, where Ruth grew up from the time he was 6 until he was 19, when he left to join the International League’s Baltimore Orioles. The throng also included members of the Brooklyn Dodgers and New York Giants, who had an offday, and a large contingent of Cuban fans who turned out in support of Acosta.6 The temperature was nearly 80 degrees when the Yankees ran onto the field for the opener and continued and rise to a high of 83, 19 degrees higher than the 64-degree average for Upper Manhattan that time of year.

Mays and the Yankees got off to a shaky start in the top of the first. Joe Judge opened the inning when his hit bounded over the head of Ruth in center field for a triple.7 Bucky Harris followed with a walk. With runners at the corners and no one down, Sam Rice doubled to right to score Judge. Harris, attempting to score on the play, was thrown out at the plate when Aaron Ward relayed the throw from right fielder Bob Meusel to Truck Hannah. Right fielder Braggo Roth followed with a single to advance Rice to third. Rice came in to score when Yankees catcher Hannah wildly sailed his throw into center field while trying to catch Roth attempting to steal second. Things seemed to be unraveling on the Yankees before Mays pulled himself together and fanned left fielder Howie Shanks to end the inning. All things considered, Mays and the Yankees were fortunate to get out of the inning trailing only 2-0.

After Acosta retired Ward to start the bottom of the first, a short delay temporarily interrupted the building excitement. With Wally Pipp at the plate, a foul tip caught home-plate umpire Tommy Connolly on the leg and delayed the game for five minutes while he “hopped around on one leg like a stork.”8 After Pipp was retired, the crowd began to buzz in anticipation as Ruth strode to the plate.

The Bambino didn’t keep the fans in suspense very long. The count was three balls and two strikes when Ruth straightened out one of “Senor Acosta’s shoots” and delivered his 50th home run of the season.9 It was a typically majestic Ruthian blast that ricocheted off the grandstand roof in right field and bounced toward the infield, sending the fans into hysteria. The crowd gave Babe a tremendous ovation as he traveled over the plate “smiling a smile as broad as his massive shoulders and raising his cap to the populace.”10 The long awaited 50th home run had come to pass and the crowd celebrated an occasion of human achievement —the accomplishment of something once thought impossible.

After Ruth’s blast, Acosta “closed like a clam.”11 Despite walking six batters, the diminutive Senators pitcher limited the Yankees to three additional hits. Duffy Lewis opened the bottom of the second with a single over short, but he was forced at second before Roger Peckinpaugh and Hannah fouled out to Judge at first to end the inning. The left-handed-hitting Mays singled over first to lead off the third, but was cut down when he attempted to stretch the hit into a double. Lewis collected his second hit of the day with a single in the ninth. The Yankees, unable to come up with a big hit, stranded seven baserunners. The victory moved Acosta to 4-4.

The Senators added a run in the sixth. Harris singled to center and when Ruth inexplicably threw the ball to Pipp at first, Harris alertly advanced to second. Rice attempted to sacrifice Harris to third, but by the time Mays fielded the bunt and tossed the ball to Ward, the Senators second baseman had safely beaten the throw. Roth delivered his second RBI of the day when he sent a fly ball to deep left that allowed Harris to trot home with the game’s final run.

Mays went the distance and gave up three runs, all earned, on eight hits. He walked one and struck out five as he dropped to 25-11 for the season. Three days later he tossed a six-hit shutout against the A’s at Philadelphia to end his season at 26-11.

Ruth had three attempts to extend his home run record to 51. In the fourth inning he grounded to Judge, who threw to Acosta covering first. The Yankees center fielder walked in the sixth and later grounded out to Harris at second base in the eighth. Number 51 would have to wait, for now.

The loss, coupled with the Indians’ 2-0 shutout of the White Sox, dropped the Yankees 3½ games behind the Indians. With only six games remaining on the schedule, the afternoon’s nightcap was a must-win for Ruth and the Yankees. They did win the game, 2-1, scoring the winning run in the bottom of the ninth inning. Ruth was 4-for-4 in the game, and hit his 51st home run —a solo shot —off Jim Shaw in the first inning. The Yankees didn’t score again until the bottom of the ninth, but got their win, 2-1.

Ruth, who himself was abandoned as a child, had a lifelong love for children and his commitment to help disadvantaged children around the world was well documented. After the game Ruth gifted his 50th-home-run bat to Nouvart Dzeron Koshkarian, a noted Armenian singer and artist and representative of the Near East Relief Fund.12 The bat was to be auctioned off to benefit the Armenian orphans who had survived the Armenian Genocide of 1915.13

1 Williamson’s 27 home runs in 1884 were largely attributed to the fact that Chicago played its home games in White Stocking Park (a.k.a. Lake Front Park). In 1884 the park’s dimensions were 180 feet down the line to left, 280 to left-center, 300 to dead center field, 252 to right-center, and 196 down the line to right. The right-handed-hitting Williamson hit 25 of his 27 home runs at White Stocking Park and never hit more than nine home runs in any other season.

7 Multiple contemporary newspaper accounts of the game credit Judge with a triple in the first inning. While researching this game, the author discovered three unique box scores with only one crediting Judge with a triple. Play-by-play data for this game is unavailable on Retrosheet.org and Baseball-Reference.com.

12 Nouvart Dzeron Koshikarian was born in the province of Harpoot, Armenia. At an early age, she was brought to the United States by her parents, who had been forced to flee Turkish persecution. A successful professional painter in her adult life, she abandoned her career and devoted her time to spreading awareness about the atrocities that had occurred against the Armenian people.