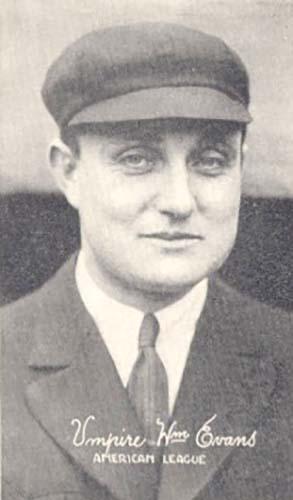 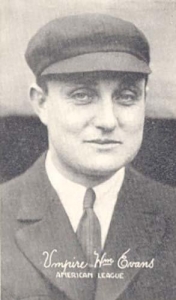 In 1921 both Ty Cobb and Billy Evans were highly respected in professional baseball. Both men had broken into the majors around the same time. Both were eventually inducted into the Hall of Fame. But their confrontation during the September 24, 1921, game between Cobb’s Detroit Tigers and the Washington Senators, initiated when Evans called Cobb out on a close play at second, ultimately escalated into the two men brawling outside the dressing rooms after the game.

The 34-year-old Cobb was in his 17th major-league season in 1921. He had added managing duties to his on-field work that season, and the Tigers, with four games remaining, had already won 10 more games than in 1920. Increased responsibilities had not diminished Cobb’s batting eye; the 12-time American League batting champion entered the September 24 game with a .387 batting average, trailing only teammate Harry Heilmann’s .398 among AL hitters. Nor had they tempered his characteristic fiery approach to the game.

Evans was known as the Boy Umpire when he joined the AL in 1906 at age 22, the season after a teenage Cobb made his debut with Detroit. Now 37, Evans had earned a reputation as one of the game’s fairest umpires, capable, as his biographer noted, of handling any situation that arose on the diamond.1

Cobb was in center field and Evans was umpiring at first when the Tigers faced the Senators in the second game of a three-game series. Washington had entered a new era in 1921, when team president and co-owner Clark Griffith relinquished managerial duties to George McBride, and the Senators responded with a good showing. They were in fourth place with a 74-72 record and eyeing the possibility of finishing as high as third. Their chances had increased a day earlier, when Joe Judge’s bases-loaded single in the ninth gave Washington a 2-1 win over the Tigers.

On the mound for Washington on the 24th was Walter Johnson, who was 15-13 and, at age 33, was regarded as being past his prime. Johnson had been in apparent decline since he injured his arm during the 1920 season. In 1921 his legendary fastball was still as fast as ever, but the hop that accompanied it before his injury was missing.

The Tigers wasted no time in going to work in the first. Ralph Young led off with a single to center. Bob Jones walked, and Cobb drilled a line-drive single to right to score Young for a 1-0 lead.

Bobby Veach followed with a bunt, which Johnson fielded and threw to Howie Shanks for the force at third. Heilmann grounded into a force for the second out. Now with Cobb on third and Heilmann on first, manager Cobb ordered a double steal – but the strategy backfired when baserunner Cobb was tagged out by catcher Val Picinich on a close play at the plate.

The starting pitcher for the Tigers was Red Oldham, who had an undistinguished major-league career overall but tremendous success against the Senators. “He beat us in eight games in 1922,” noted Washington second baseman Bucky Harris.2 Oldham’s success against Washington spanned teams and leagues; he retired the Senators in order in the ninth to close out Game Seven of the 1925 World Series for the Pittsburgh Pirates.

But on this day the Senators had his number. They scored single runs in the second and third innings to take a 2-1 lead. In the second, Sam Rice singled and took second on Goose Goslin’s swinging bunt. Then Shanks singled over second base to score Rice. An inning later, Johnson drilled a double hit off the right-field scoreboard, took third on Judge’s fly out, and scored when Harris struck a long fly ball to Heilmann in right.

The Tigers sought to draw even in the fourth. They had runners on second and third with nobody out, on a walk and a double by Heilmann. But Johnson worked out of trouble. Lu Blue popped up, pinch-hitter Chick Shorten struck out, and after purposely walking Johnny Bassler, Johnson whiffed Oldham to end the threat.

Detroit challenged Johnson again in the fifth. With one out and a runner on first, Cobb singled to right to put runners on the corners. Veach popped up for the second out.

Then Cobb opted for some strategy with Heilmann at the plate, taking off for second base on an attempted delayed steal. With Harris, who was only in his second full season in the majors and still learning how to adjust to Cobb’s baserunning tactics, taking the throw at second, a steal appeared to be a sure thing.

But McBride, who was Washington’s starting shortstop when Cobb was in his prime, had forewarned Harris a few years before. “You’re just breaking in, Bucky,” McBride told Harris, “Watch how Ty runs the bases. He has a variety of slides.”3

“McBride knew what he was talking about,” Harris remembered. “In 1920, my first year as a regular, Cobb stole only 14 bases. I guess I underrated him a bit until he fooled me several times. Then I studied out a way to stop him. I figured that, for all his wonderful sliding to get away from an infielder, he had to come back to the bag with his fingers or toes. I decided that if I went after him I was lost. I made up my mind that I would let him come to me. I would wait at the bag for him to come in and then tag him. Thereafter Cobb didn’t steal often on me.”4

In 1921 Harris was still learning, and he took the throw on the play and reacted. Cobb made a hook slide to avoid the tag – but was called out “[Umpire] Evans so ruled, at least,” wrote the Washington Star’s Denman Thompson.5 Cobb was furious, and after he leaped to his feet, he and Evans exchanged harsh words. Then Cobb headed to his center-field position, since his was the last out of the inning, and made an unfriendly gesture, raising tensions even further.

The Senators pushed their lead to 5-1 by scoring three runs in the sixth. Harris singled, moved to second on a wild pitch, advanced to third on a sacrifice, and scored when Rice singled. Goslin followed with a single to right center. Shanks scored Rice and Goslin with a triple to right field to cap the scoring.

Johnson retired the Tigers in the last three innings for a 5-1 Washington win.

But the real late-inning drama involved Cobb and Evans. They continued to trade unpleasantries until Evans challenged Cobb to meet him in the umpires dressing room after the game. Cobb gladly accepted. “All the other players were excited, anxious for the game to be over to see the big fight,” Washington pitcher Al Schacht later wrote.6

When the game concluded, a few players from both teams gathered by the short flight of steps under the stands that led to the dressing rooms. Cobb, his face pale with anger, and Evans talked about the flashpoint play in the fifth inning before agreeing that the fight was still on.

“But the ‘audience’ objected [to the location], arguing that (the dressing room) was hardly large enough for the umpires to dress, much less for Evans and Cobb to battle,” according to Schacht, “so it was decided that they would fight in the areaway outside the dressing rooms.”7

“How do you want to fight?” Evans asked while removing his blue coat. “I’m no fighter,” replied Cobb. “You challenged me. Everything goes.”8

By this time players from both teams in different stages of undress had left their clubhouses and gathered to watch the bout. “It was a one-round, no decision affair, governed by the Old London prize ring code. Under the rules a round ends when a contestant is floored,” was how Denman Thompson described the rules.9 “Cobb led with his left at the gong, but most of his effective punches were with the other (hand),” reported most of the spectators.

The boxing fans counted eight punches by Cobb, one of the eight cutting Evans’s lip before the two men toppled to the floor with “a resounding thump.”10 Cobb, who was on top of Evans, growled and cursed as he put his hands around the umpire’s throat. According to Schacht, Jim O’Dea, “one of the stadium’s groundkeepers and a very strong Irishman,” intervened, “in the capacity of self-appointed referee,”11 and, “referee O’Dea declared all bets were off.”12 Breaking up the fight wasn’t easy. “O’Dea had to pry Cobb’s fingers from Evans’s throat,” said Schacht.13

Later, when asked about the fight, O’Dea “refused to render a verdict, but the fringe of hastily gathered were inclined to concede a shade to Cobb,” wrote Thompson.14

Evans umpired the next day’s game – won 3-2 by Washington to compete the sweep – in bandages. The AL suspended Cobb for the fight; he did not play in Detroit’s final two games of 1921.15

1 Information in this paragraph is drawn from David W. Anderson’s SABR Biography Project biography of Evans.