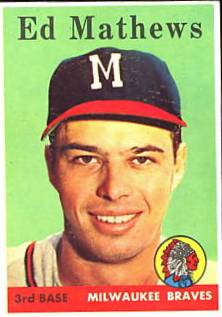 For the first time since 1955, the Milwaukee Braves entered the final week of the season with National League pennant hopes out of reach. As they prepared to host the Pittsburgh Pirates on Sunday, September 25, 1960, in their home finale, the Braves’ postseason hopes were already dashed despite their taking the first two games of the weekend series. The Pirates (92-57) entered this day’s game on the verge of clinching their first pennant since 1927, with the Cardinals (85-62) six games behind and the Braves (85-63) a half-game further back. Either a Pirates win or a Cardinals loss would settle the 1960 NL race. For the Braves, victory would allow little more than the cold consolation of sweeping the series against the presumptive pennant winners.

With the Braves spending most of the season playing catchup against the pacesetting Pirates, fan support slipped from the pennant-winning seasons of 1957 and 1958. In his pregame notes, Milwaukee Sentinel columnist Lloyd Larson cautioned Braves fans about a “get-off-the-bandwagon spirit that has reared its ugly head recently.”1 Perhaps sensing the consequences of the good times not lasting forever, Larson wrote that some fans “fail to recognize what a job has been done by the Braves collectively in the eight seasons since big league baseball came to Milwaukee.”2 While the Braves’ season attendance of 1,497,799 represented a 33 percent decline from 1957, this game’s attendance of 38,109 was the third largest home gate of the season.

The pitching matchup involved long-tenured workhorses Harvey Haddix and Warren Spahn. The early innings witnessed little action as Haddix and Spahn held the opposition in check. Neither pitcher allowed a baserunner until the Braves’ Alvin Dark smacked a one-out double in the bottom of the second. Dick Schofield, playing shortstop for the Pirates in Dick Groat’s absence,3 made an error two batters later that advanced Dark to third and allowed Felix Mantilla to reach first base. The scoring threat ended when Chuck Cottier hit into a force play. Schofield atoned for his error with a one-out single in the top of the third, but Spahn induced Haddix to ground into a force play and Gino Cimoli to fly out to Bill Bruton in center field. The Braves’ third proved uneventful, and neither team reached base in the fourth.

The fifth inning witnessed the game’s first run. With two out in the top half of the frame, Bill Mazeroski sent Spahn’s pitch on a line into the left-field bleachers. Mazeroski’s solo shot was his 11th home run of the season. After Spahn retired Schofield to end the Pirates’ fifth, Haddix emerged to face the bottom half of the Braves lineup. Aside from a single to right field by Mantilla, Haddix and the Pirates returned to their dugout unscathed by Braves bats. The Pirates went down in order in the visitors’ half of the sixth. For the Braves, catcher Del Crandall doubled with one out but was stranded when sluggers Eddie Mathews and Henry Aaron proved unable to bring him home.

As Roberto Clemente emerged from the Pirates dugout to lead off the seventh, the County Stadium public-address announcer shared the news that the Cubs had defeated the Cardinals 5-0 at Wrigley Field. Regardless of the outcome of the game in Milwaukee, the Pirates were confirmed as NL champions. Clemente’s leadoff single suggested a positive reaction to events in Chicago as well as a willingness by the Pirates to celebrate their coronation with a victory of their own. After Dick Stuart flied out to Bruton in center field, Hal Smith came to the plate.  Smith was in the lineup to spell regular catcher Smoky Burgess, and his double to left field off Spahn scored Clemente for a 2-0 Bucs lead. The throw home allowed Smith to advance to third base, leaving the Pirates 90 feet away from further padding their lead. Don Hoak and Mazeroski could not make that happen, with Hoak popping out to first baseman Joe Adcock in foul territory and Mazeroski grounding out to Mantilla.

Spahn prevented Pittsburgh from adding to the lead in the top of eighth, which would be Spahn’s last inning. Trailing 2-0, and with his pitcher due to bat in the eighth, Braves manager Chuck Dressen ended Spahn’s day and started another player’s major-league career. Joe Torre, hitherto known primarily as the little brother of Braves first baseman Frank Torre, opened the Braves’ eighth and his own major-league career by pinch-hitting for Spahn. The 20-year-old Torre singled to center field, thereby tallying the first of his eventual 2,342 hits. As soon as his career began, Torre’s involvement in this game ended. Dressen sent outfielder Lee Maye to run for him.4

After Torre’s hit, Haddix’s shutout bid unraveled against the top of the Braves order. Bruton singled to right field, sending Maye to third. Crandall hit a sacrifice fly to left field, scoring Maye when Hoak cut off Bob Skinner’s throw home. Nonetheless, Bruton had enough time to claim second base. After Haddix walked Mathews, Pirates manager Danny Murtaugh summoned Roy Face for his league-leading 67th appearance of the season. With Aaron batting, Pirates catcher Smith attempted to pick Mathews off first base. While Smith’s throw was on target, Mathews collided with first baseman Dick Stuart and the throw sailed into right field. Bruton headed home from second base, and the game was now tied, 2-2. Aaron and Dark grounded out to end the inning, but the Braves had done their damage.

For the ninth inning, Ron Piche replaced Spahn on the mound. Piche would face the heart of the Pirates’ batting order, and the Bucs immediately set about reclaiming the lead. Skinner led off with a double to left field, bringing Clemente to the plate. Clemente singled into right field, and Skinner decided to test Aaron’s arm by racing for home; the throw was accurate and Skinner was out. Piche then retired Stuart and Smith to quell the Pirates’ threat. When the Braves failed to plate the winning run in the bottom of the ninth, the game headed to extra innings.

Piche set the Pirates down in order in the top of the 10th, including back-to-back strikeouts of Hoak and Mazeroski. Piche’s success on the mound must have made an impression on Dressen, because the Braves manager let his pitcher bat to lead off the Milwaukee 10th. Piche grounded out to Schofield, and Bruton followed by flying out to Skinner in left. With two out, Face walked Crandall on four pitches, bringing Mathews to the plate. The Braves third baseman liked the first pitch from Face so much that he sent the ball into the right-field bleachers for a game-winning home run. It was Mathews’ 38th home run of the season. He would hit one more to close the season with 39, just one fewer than Aaron’s team-leading 40.

Although Milwaukee won 4-2 and swept the series, most of the postgame commentary concerned the pennant-winning Pirates and whether they had backed into the pennant. Murtaugh was not having any of it: “My players don’t have to apologize to anybody for the way they have played this year. Any team which can win 92 games in a tough league like we’re in … is not backing into any pennant.”5 The players’ disappointment dissipated quickly. At Cimoli’s prompting, champagne corks popped throughout the clubhouse.6 Further, their fans’ excitement clearly was not dampened by events in Milwaukee; an estimated 70,000 to 100,000 people greeted the Bucs on their return to Pittsburgh that evening.7 Pittsburgh was headed to the World Series for the first time since the Coolidge administration. The  Pirates also learned the identity of their World Series opponent that afternoon. The American League crowned its champion when the Yankees defeated Boston to reclaim the pennant from the “Go-Go” White Sox of the prior season.

Milwaukee completed its season by splitting two games in Philadelphia before losing two out of three games to the Pirates at Forbes Field. With the 1960 season’s end, the coming Hot Stove season led to uncertainty about 1961. Speculation soon centered on whether several holdovers from the 1957 championship team would return, including Red Schoendienst, Don McMahon, and Johnny Logan.8 Individual Braves may have been concerned about their futures, but the continuing presence of the franchise in Milwaukee would dominate future offseasons.

3 With the World Series in sight, the injury status of the Pirates’ regular shortstop, Dick Groat, remained uncertain.  Groat had been out of the lineup for three weeks since being hit by a Lew Burdette pitch and did not see action in Milwaukee. Milwaukee Journal, September 24, 1960.

4 Torre’s timely hit culminated a successful first season in Organized Baseball. He led the Northern League in batting average while playing for Eau Claire and finished the minor-league season with Louisville of the American Association.  The Sporting News, October 5, 1960.