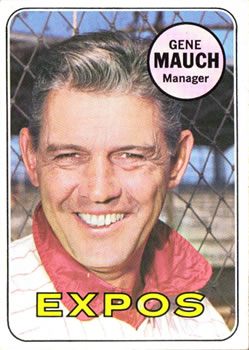 Most managers get fired for such modest predictions, but for Expos bench boss Gene Mauch, 70 wins represented an 18-game improvement for the second-year Montreal Expos. And when he made that prognostication at a news conference in Montreal in January 1970, he didn’t see the number as a final result, but as a benchmark the team would likely surpass.

Their opponents for the game, the St. Louis Cardinals, were finishing a disappointing season. After enjoying a marvelous decade in which they played in three World Series and won two of them, the St. Louis Cardinals weren’t much better than the Expos in 1970, with a 74-82 record going into the game.1By this point they were just playing out the string.

Two journeymen started the game. Left-hander John O’Donoghue (2-3) took the mound for the Expos. In his ninth season in the majors, he arrived in Montreal on June 15 in a trade with the Milwaukee Brewers for Jose Herrera. Frank Bertaina, the St. Louis starter, was making what would be his last appearance in the major leagues. He had a 1-2 record at game time.

The 20,998 fans at Jarry Park saw the Cardinals start the game with some textbook small ball. Lou Brock led off with a single to left and advanced to second on a sacrifice bunt by Ed Crosby. Carl Taylor moved Brock to third on a groundout to the right side, and Joe Torre singled him in to make the score 1-0. The Cards weren’t finished, as Jose Cardenal moved Torre to third with a single to left, then showed how dangerous the famous Cardinal speed could be; he attempted to steal second, and in trying to gun him down, Expos catcher John Bateman sent the ball to the outfield, allowing Torre to score easily.

The Cardinals waited until the third inning to reciprocate the gift run. With one out, Don Hahn singled to left. Gary Sutherland followed with a tailor-made double-play grounder to second, but Cardinals second baseman Ed Crosby booted the ball, giving the Expos runners on first and second and the meat of the order coming up. Rusty Staub didn’t look that gift RBI in the mouth and put the Expos on the board with a single to right that sent Sutherland racing to third. Cleanup hitter Bob Bailey grounded to short, but shortstop Milt Ramirez played the ball perfectly and chose to take the out at second instead of throwing to the plate. Sutherland scored, tying the game at 2-2.

The score remained that way until the Montreal half of the sixth. Bateman singled to left and advanced on an error by Brock.2Bobby Wine showed he was of good vintage that night by singling and sending Bateman to third. Now this is where Bertaina met with some hard luck. Bateman was no speed merchant; he stole 10 bases in a 10-year career, eight of which came in that 1970 season.3 It would take a hit or a pretty deep fly ball to score him. Ron Fairly, the next batter, hit the requisite fly ball to center field. Somehow it wasn’t deep enough to score Bateman, but Wine was able to make it to second. Mauch and St. Louis manager Red Schoendienst then continued their tactical pas de deux. Bertaina walked Clyde Mashore intentionally, which loaded the bases with the pitcher coming up. Mauch wanted to keep reliever Mike Marshall in the game – he had entered in the fifth – so up to the plate Marshall went with his .100 batting average and zero RBIs.

If this were fiction, Marshall would have hit a grand slam. The truth is that he didn’t get a hit at all, but he did hit a fly ball deep enough to score Bateman. Bertaina didn’t allow any more runs the rest of frame, and ended the sixth, and his career, downby a run.

Marshall breezed through one-two-three innings in the seventh and eighth. His Cardinals counterpart, Canadian Reggie Cleveland, held the Expos scoreless in the two frames, although Montreal threatened in the eighth with one out and runners on first and third. Marshall had a chance to double his RBI total for the season, but his fly to center was not deep enough to score Fairly from third.

Mauch sent a tired Marshall out to start the ninth, even though he had been pitching since the fifth. Back-to-back singles by Luis Melendez and Ted Simmons gave the Cardinals runners on first and second with nobody out. A double by pinch-hitter Joe Hague that scored Melendez and sent Simmons to the hot corner finally convinced Mauch to replace Marshall with Dan McGinn. Julian Javier came on to pinch-hit and he took full advantage of the situation, singling to right to score Simmons and move Hague to third. Brock grounded to the right side, and Fairly was only able to get the out at first while Javier motored to second; with Hague still at third, the Cardinals now had two on with one out.

At this point the managers played the percentages game. With a southpaw on the mound, Schoendienst sent right-handed hitter Jim Beauchamp up to hit for the lefty Crosby. Mauch countered with right-hander Howie Reed to replace McGinn. It seemed that Mauch won the battle of percentages, but Beauchamp came through with a sacrifice fly to score Hague and give the Cardinals a 5-3 lead. Reed got through the rest of the inning without any further damage.

What happened in the bottom of the ninth became the two-year-old Expos’ “shot heard ’round Quebec.” The two managers used every angle and pulled every string to win this game even though it would not affect the standings. Schoendienst sent righty Frank Linzy to the mound. Mauch countered with left-handed pinch-hitter Mack Jones, and to the delight of his constituents, the Mayor of Jonesville (the left-field bleachers at Jarry Park, so named in honor of the Expos’ left fielder) singled to left. Wasting no time, Schoendienst brought in Tom Hilgendorf to get the lefty-versus-lefty matchup with Le Grand Orange, Rusty Staub. Hilgendorf won this battle, as Staub flied to right. The next two scheduled hitters were righties, so Schoendienst brought in right-hander Chuck Taylor. Bailey singled, moving Jones to second; Bateman popped out to first.

It was two on, two out, and Mauch’s turn in the managerial chess match. Jim Fairey, batting in place of Wine, sank his teeth into a Taylor pitch for a single to center, scoring Jones and bringing up Fairly.

Schoendienst brought in left-hander Al Hrabosky, known as the Mad Hungarian for the way he ranted and raved off the mound between pitches. He became an even madder Hungarian when Fairly smacked a three-run walk-off home run that gave the Expos a 7-5 win, brought “70 in ’70” to reality and made Mauch and Expos fans feel as though they won the World Series.

“Mauch displayed a rare show of emotion following the game when he repeatedly raised his arms into the air and received hearty applause from the spectators on the way to the clubhouse,” wrote the Canadian Press.4

The Expos finished the season with a 73-89 record, better than the three other 1969 expansion teams.5 The 70th win symbolized a progression that left Expos fans with bright thoughts for the future. Alas, it would be another nine seasons before they would break the .500 mark.

1 The Cardinals defeated the New York Yankees in 1964 and the Boston Red Sox in 1967, both times in seven games. They lost to the Detroit Tigers in 1968, also in seven games.
2 Brock led the National League in errors by a left fielder nine times in his first 11 seasons, including 1970, when he committed 10 miscues.
3 One of those stolen bases came off future Hall of Famer Johnny Bench on August 18, 1970. Bateman got cocky and tried to swipe second off Bench again the next night. Bench got him.
4 Canadian Press, “Expos Reach 70 Wins,” Ottawa Journal, September 26, 1970.
5 The Kansas City Royals and Milwaukee Brewers both finished with 65-97 records while the San Diego Padres went 63-99.