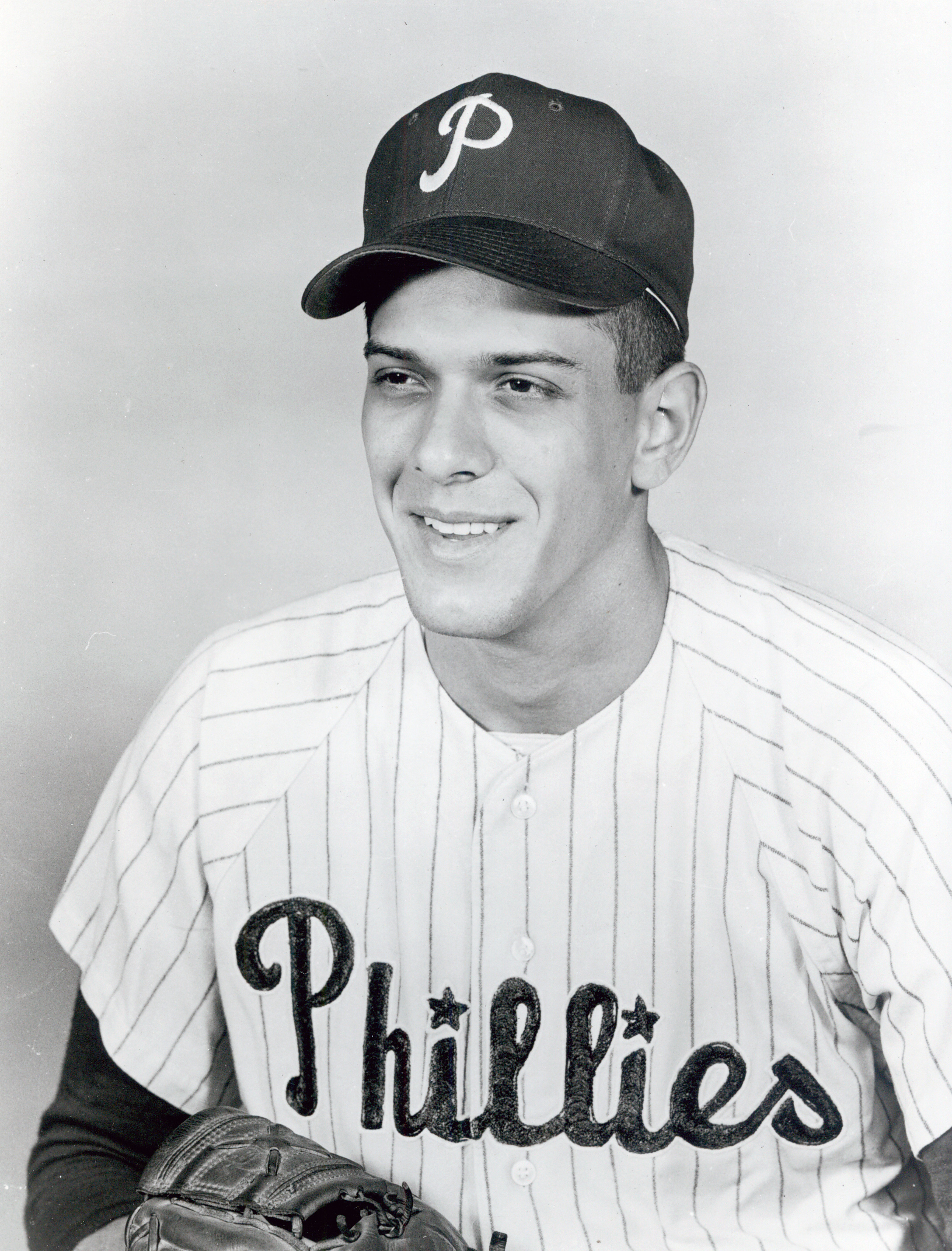 In 1964 Connie Mack Stadium was described as a “sprawling network of steel and concrete, hemmed in by a drab, dreary, fraying residential district”1 Nevertheless, 26,381 spectators jammed into the stadium on a Saturday afternoon for Knothole Day, a promotion where free tickets were given to kids 14 and under (the paid attendance was only 14,330). Fans were eager for the first-place Philadelphia Phillies to break their five-game losing streak. They had seen their lead slip from 6.5 games to 1.5 since the start of the week.

Art Mahaffey, who had pitched well in the Monday loss to the Cincinnati Reds that began the streak, started for the Phillies. In his two prior starts before the Monday game Mahaffey had not made it out of the third inning so Gene Mauch, the Phillies manager, was not sure of what he could expect from his right-hander. Denny Lemaster started for the fifth-place Milwaukee Braves as they were aiming for their third straight win over the Phillies. The four-game series would conclude the next day.

The game started well for the Phillies as they racked up a 4-0 lead after the second inning. They scored three runs in the first when Dick “Richie” Allen’s triple drove in Cookie Rojas, who had lead off the bottom of the first with a single to left. Alex Johnson homered with two outs, bringing in Allen ahead of him. Philadelphia added another in the second on two singles and a sacrifice fly by Johnny Callison.

Things were quiet until the fifth, when the Braves started their comeback. Dennis Menke opened the inning with a solo home run, his 19th of the season. After Mahaffey retired Sandy Alomar and Ethan Blackaby (pinch-hitting for Dave Eilers) on two groundouts, Felipe Alou and Lee Maye hit back to back doubles scoring the second run. Mauch stuck with Mahaffey through a bases loaded jam in the sixth and the starter pitched a 1-2-3 seventh, but in the eighth, Mauch had to make a change. Joe Torre and Rico Carty each reached on singles. With runners on first and second and no outs, Jack Baldschun was summoned from the bullpen. Menke laid down a bunt, but Baldschun pounced on it and threw to third in time to retire the lead runner. Mike de la Hoz then singled into the hole at third to load the bases.

Mauch called for Bobby Shantz. Carty scored on a passed ball charged to Gus Triandos, but then Shantz struck out pinch hitter Ed Bailey. Alou was intentionally walked but Shantz pitched the Phillies out of any further trouble by retiring Maye on a high pop-up to third baseman Allen. Mauch must have wanted Shantz to pitch the ninth, so he let him hit for himself in the bottom of the eighth. With two runners on and two outs, Shantz flied out to left to close the inning.

The moves Mauch made (or didn’t make) with his pitching staff had a significant influence on the outcome of the game. Mauch stuck with Mahaffey and Shantz in crucial situations because he seemed to have lost faith in his two best relievers during the year, Ed Roebuck and Baldschun. Frank Dolson of the Philadelphia Inquirer wrote “For months, Gene has been a manager with a quick hook, ready to signal to the bullpen for Jack Baldschun and Ed Roebuck at the first sign of danger.”2

This sentiment was supported as twice in two days Mauch yanked Baldschun in the middle of a scoreless inning, including this game, due to ineffective performances. Further, twice he stayed away from Roebuck (who gave up a game winning homer to Vada Pinson in last Wednesday’s game against the Reds). Therefore, Shantz, the third pitcher of the day for the Phillies, was still in the game to start the ninth.

The Phillies were still hanging on to a 4-3 lead as the ninth started. That’s when it all fell apart for the home team. Hank Aaron started the frame with a base hit to left. Eddie Matthews singled to right and Frank Bolling grounded a ball to short for a possible double play. Unfortunately, Phils’ second baseman Tony Taylor made an error on the catch, and the bases were loaded with nobody out. Still, Shantz was left in to pitch. With Roebuck warming in the bullpen, Carty cleared the bases with a triple to center, and the Braves had taken a 6-4 lead. Although that hit effectively sealed the win for the Braves, the fireworks had just begun.

Roebuck now came on to replace Shantz. After Menke popped out, de la Hoz, hit a liner to left. Rojas, who had moved over from his centerfield position, apparently caught the ball and threw home as Carty attempted to score on the sacrifice fly. The problem started when the third base umpire, Ed Vargo, ruled that the ball was trapped. After Rojas and Mauch argued vigorously with Vargo, Vargo checked with second base umpire Shag Crawford — and the call was reversed.

This brought Braves manager Bobby Bragan out to argue. Once calm was restored, Roebuck threw to third to see if Carty left the base too soon. Home plate umpire Al Forman, who was covering third since Vargo was in left field ruling on the catch, called Carty out. This started another round of arguments and after all the shouting had stopped four people were tossed from the game and the side had been retired. Warren Spahn entered the game and quietly retired the Phillies in the bottom of the ninth. Their sixth straight loss was in the books.

The losing streak reached 10 games before the Phillies finally righted the ship and won their last two games of the season. It was too late, however, as they ended in a tie for second place with Cincinnati, one game behind the St. Louis Cardinals for the National League pennant. The Sporting News described the slide as the “worst collapse of a first-place team in the stretch in major league history.”3 Many critics blamed Mauch for his pitching staff decisions during those last two weeks. Six times he started Jim Bunning and Chris Short on two days rest, only to lose all six games. In the offseason, Mauch was asked which loss hurt the most and he said “ I guess the one I remember first is when we had Milwaukee down 4-0, September 26. They came back to beat us. I’m not blaming my guys. Put it all on me.”4

My grandfather sent me my first Philadelphia Phillies yearbook in 1964, and after reading it over and over, I simply wanted to see the players I had read about and followed all summer play in person. I pleaded with my dad for weeks to take me to my first major-league game and in a weak moment he relented.

My dad was not a baseball fan but with my brother in tow and the neighbors following in their car, off we went to Philadelphia. While I was thinking about Johnny Callison playing right field and Richie Allen continuing his run for rookie of the year, my dad was focused on finding a safe parking spot. He had read newspaper articles describing the area as “some of the best tire slashers have infiltrated the Connie Mack stadium area,”5 and it was a “tired looking stadium with atrocious parking facilities.”6 With divergent thoughts in our heads we left that sunny morning to see the game.

After the game, we left the stadium and returned to the car. It was still where we parked it with all four tires in good shape. While my Dad was relieved to see the car intact, I continued reminiscing about the game. I don’t remember the arguments with the umpires, the blown four run lead or that the Phillies lost. I just remember that Alex Johnson and Dennis Menke hit home runs and I got to see the great Hank Aaron. For me, it was a memorable day and the start of a love affair with baseball and my favorite team, the Phillies.

Dolson, Frank, “From This It Looks Like Everyone Was Right – Except the Umpires,” Philadelphia Inquirer, September 27, 1964.