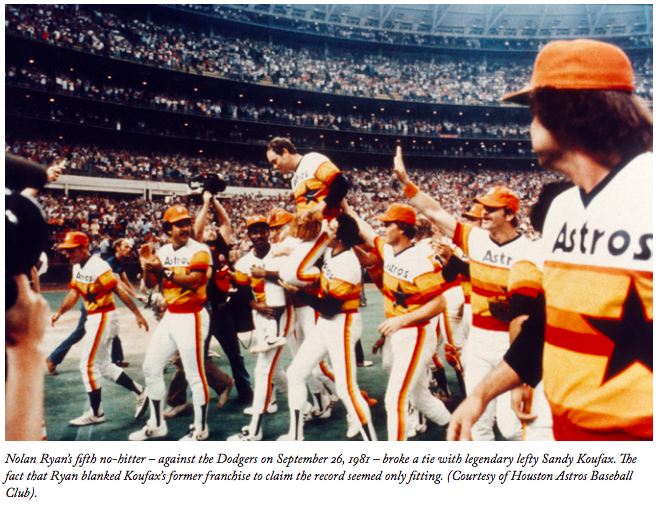 When Nolan Ryan signed on November 19, 1979, what at the time was the richest contract in baseball history with the Houston Astros, his new team went from contenders to favorites in an instant. However, though Ryan indeed had helped to lead the Astros to the 1980 NL West Division title and their first playoff appearance in 19 years of franchise history, he had not been as dominant as in the 1970s and the Astros had fallen to the Philadelphia Phillies in one of the greatest five-game playoff series of all time. Thus, both Ryan and the Astros began the 1981 season with even greater expectations.

At the onset of the players’ strike on June 12, 1981, the Astros had a 28-29 record and were going nowhere. After games resumed on August 10, the Astros’ fortunes reversed, and they were battling the Cincinnati Reds for the second-half division title. Entering their September 26 game against the division rival Los Angeles Dodgers, who had won the first-half title, they held a 1½-game lead on the Reds. Ryan helped maintain that lead as he pitched his fifth career no-hitter, breaking a tie with legendary Dodgers lefty Sandy Koufax, in a 5-0 shutout that lowered his league-leading ERA to 1.74.

Early in the game, neither the 32,115 fans in attendance at the Astrodome nor the national television audience watching it on NBC’s “Game of the Week” broadcast, could have anticipated that they would be witnesses to a historic event. Ryan had problems with his control and needed 65 pitches to make it through the first three innings, during which he surrendered three walks and uncorked a wild pitch. If he maintained such a pace, Ryan would not even finish the game, let alone pitch a no-hitter.

The Astros got on the scoreboard against Dodgers starter Ted Power in the bottom of the third inning. Phil Garner led off with a single, but he was caught trying to steal second base. However, the next batter, Tony Scott, reached first safely on an error by shortstop Derrel Thomas and advanced to third on Jose Cruz’s double.  Ryan’s batterymate, Alan Ashby, followed with a single that scored Scott and Cruz for a 2-0 lead.

After Ryan struck out Steve Garvey to start the fourth inning, he received a visit from his pitching coach, Mel Wright, who suggested he was over-striding.1 Ryan corrected his mechanics, saying later, “I let up a little bit in the late innings. I didn’t get as many strikeouts, but I had better control.”2 He also credited his curveball with being the key pitch of the day because it helped keep the hitters off-balance in the absence of his best fastball. The result was that he allowed no further baserunners; going back to the last batter of the third inning, he retired the final 19 Dodgers in a row.

Ryan encountered only two precarious situations. The first occurred in the second inning when he walked Garvey to start the frame, after which Garvey stole second base and advanced to third on a wild pitch. Ryan escaped that jam with two strikeouts and a fly ball that ended the inning. The second close call came in the seventh inning when Mike Scioscia hit a deep ball that right fielder Terry Puhl caught just in front of the warning track and which he said, “hung up just long enough to run under it.”3

After the game Ryan claimed, “I really didn’t think about the no-hitter. Although I knew I had one going. When the catcher [Scioscia] hit the ball in the seventh and it was caught, I thought I might have a shot at it.”4 By the top of the ninth inning, everyone — including Ryan — knew that he had a shot at making history. Astros pitcher Joe Niekro declared, “I was so nervous I squeezed the cover off the baseball I was holding in our dugout.”5

Before the last inning and its attendant drama arrived, the Astros added three more runs off Dodgers relievers Dave Stewart and Steve Howe (all three runs were charged to Stewart) in the bottom of the eighth inning. Craig Reynolds, Garner, and Cruz each drove in a run to provide a 5-0 cushion that gave Ryan plenty of breathing room when he took the mound to finish his gem.

Ryan began the ninth in style by striking out pinch-hitter Reggie Smith. He got the next hitter, Ken Landreaux, to ground out to Walling at first base. The last batter Ryan had to retire was Dusty Baker, whom he had struck out on three pitches in his previous at-bat, in the sixth inning. That strikeout had been Ryan’s 10th of the game, which also made this the 135th game of his career with double-digit strikeouts.

In spite of the pressure of the moment, Baker said, “I wasn’t nervous. I was thinking that I didn’t know of anybody else I’d rather have at the plate in that situation than me.”6 Ryan’s first two pitches to Baker were called balls, but Baker grounded Ryan’s third pitch, a curveball, to third baseman Art Howe, who threw him out to end the game. Baker conceded, “I don’t like having my name on the scorecard in a game that made history for Nolan Ryan. But I am happy for him. He is a great pitcher.”7

Ryan finished the game with 11 strikeouts, though he registered only one over the final three innings. The 34-year-old right-hander confessed, “It’s hard to believe I got the no-hitter. It’s the one thing I wanted. I’ve had a shot at it for a long time. [His fourth no-hitter had come on June 1, 1975]. At my age, I thought I wouldn’t get it. I don’t have the stamina I used to have.”8

Ryan’s no-hitter was the first for the Astros since Ken Forsch spun one against the Atlanta Braves on April 7, 1979. It was also the third no-hitter of the abbreviated 1981 season after Len Barker’s perfect game for the Cleveland Indians against the Toronto Blue Jays on May 15 and Charlie Lea’s no-hitter for the Montreal Expos against the San Francisco Giants on May 10.

Most notably, the gem broke the record of four no-hitters that Ryan had shared with Koufax. Though Ryan had admitted that a fifth no-hitter was one of his goals, when it came to breaking the record he said, “I really don’t compare myself to (Koufax). I thought it was a great honor when I broke his [single-season] strikeout record and I’ve got that same feeling now.”9

Another satisfying feeling came from the knowledge that several family members — including his wife, Ruth, and his mother, Martha — had been in attendance at the Astrodome. After he was mobbed by his teammates, he was joined by family and friends as he gave an interview on the field immediately after the conclusion of the game.

Ryan also savored the fact that he had contributed to the Astros’ run to the 1981 playoffs by coming through in a big-game situation in a pennant race. He went so far as to state, “This is by far the most important of my no-hitters.”10 Ryan’s assessment of the significance of his feat was accurate; the Astros won only four of the final eight games that followed his no-hitter, but they maintained their lead over the Reds and finished as second-half champions of the NL West, an accomplishment that meant they would meet the Dodgers again in the first round of the playoffs.

The convergence of circumstances surrounding Ryan’s fifth no-hitter led him to assert, “When it’s all over, this will probably be the one I favor most, being we’re in a pennant race, being on national TV, being at home and having my mother here.”11