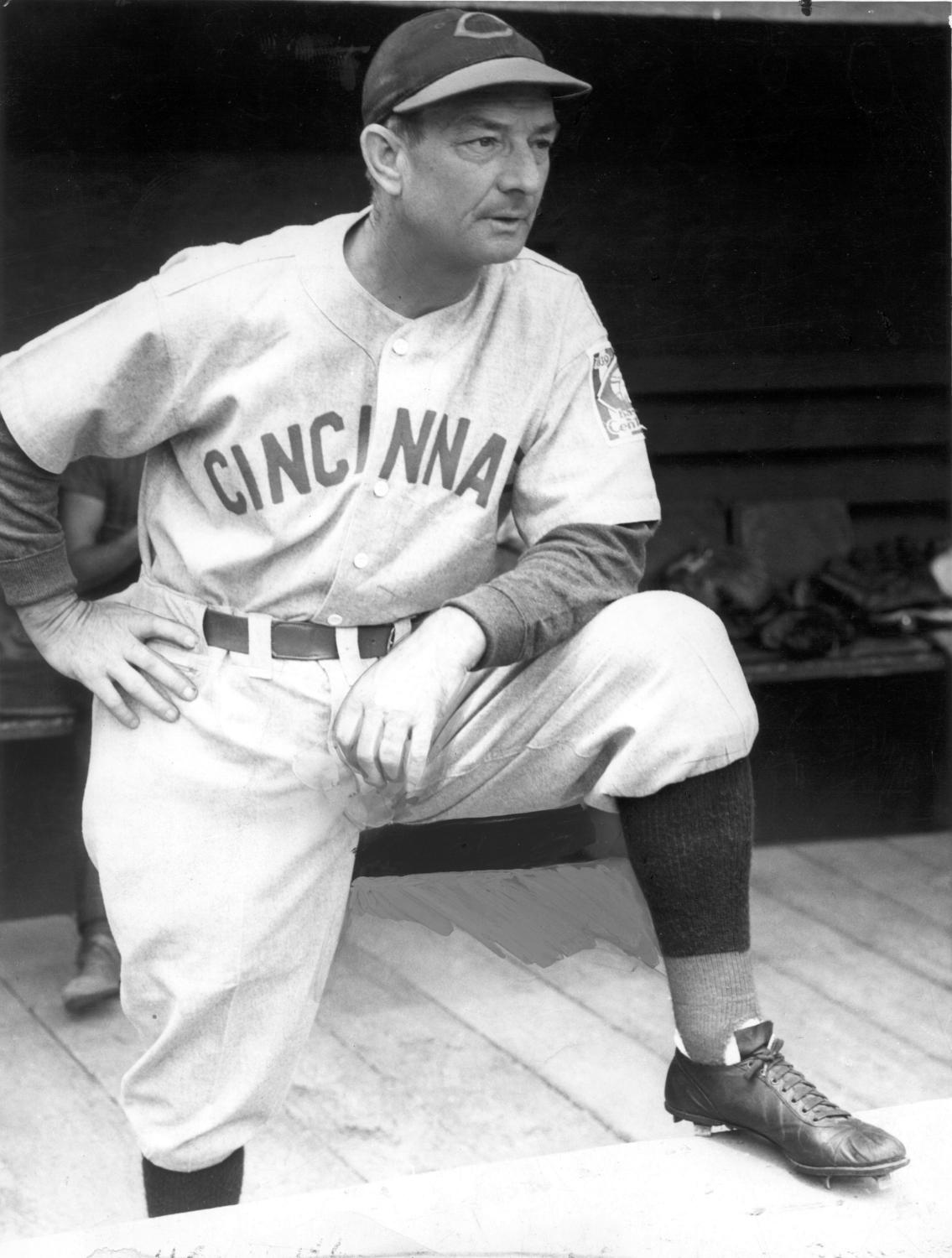 The Reds were on the brink. Twenty years removed from their only World Series championship, against the infamous Black Sox in 1919, Cincinnati was poised to become NL champions. Hosting the second-place St. Louis Cardinals in the final home game on the 1939 schedule, the Reds could clinch the pennant at Crosley Field by defeating their final championship rival. To win, however, one must score. And the Reds couldn’t score. Although Cincinnati won the first game in this series against St. Louis, the Reds had been shut out the last two outings when a win would have sealed the pennant. The day before, Cincinnati fell 4-0, pulling the Cardinals within 2½ games of the Reds with four games left for both teams. The Reds’ supporters were doing their part to get their team over the line, and this afternoon’s crowd of 17,241 added to the record-smashing 981,443 season attendance.

To seal the pennant, Reds manager Bill McKechnie sent Paul Derringer to the mound; Derringer was riding a nine-game winning streak. McKechnie had overseen the remarkable turnaround in Cincinnati’s baseball fortunes. After finishing last in 1937, the Reds achieved a first-division finish in 1938 during McKechnie’s first season in charge. McKechnie was now one win away from becoming the first manager to win pennants with three different teams. Cardinals manager Ray Blades opted for rookie left-hander Max Lanier, recently called up from Columbus. Despite his inexperience, Lanier had gone the distance in defeating Brooklyn and Chicago in his two previous outings.

Derringer surrendered only a leadoff single to Jimmy Brown during the visitors’ first. In the home half of the inning, Billy Werber reached base on a walk and advanced to second on Lonny Frey’s slow groundout, but held the bag on Ival Goodman’s groundout to third baseman Don Gutteridge. Cleanup hitter Frank McCormick singled to left field, plating Werber and ending the scoreless streak. Lanier was feeling the pressure of the moment. “Barely missing the corners trying to be careful,”1 Lanier walked Ernie Lombardi on four pitches, then hit Harry Craft to load the bases. Blades was quick with the hook, swapping the rookie Lanier for the veteran Curt Davis. Davis followed Lanier’s example by walking Wally Berger on four pitches. Three batters following McCormick’s single, the Reds brought him home without swinging the bat.

Trailing 2-0, the Cardinals tied the game in the top of the second. Johnny Mize led off with a short ball to center field. Reds shortstop Billy Myers dropped the pop-up, allowing Mize two bases on the error. After Don Padgett’s fly to left fielder Berger, Terry Moore sent a line drive over the left-field wall to tie the game, 2-2. Stu Martin’s infield single suggested that the Cardinals might be onto something, but Davis struck out and Jimmy Brown grounded to Myers to end the inning. Derringer opened the Reds’ second by popping up to Gutteridge. Werber tripled into right field and scored when Mize muffed Frey’s grounder; the error gave the Reds a 3-2 advantage. Davis struck out Goodman on three pitches, but McCormick’s single put Frey into scoring position. The inning ended, however, when Lombardi’s sharply hit ball to Brown forced McCormick at second base.

After the early offensive flurry, the game settled down. Neither side converted two-out singles in third. Derringer surrendered two-out singles to bottom-of-the-order Martin and Davis in the top of the fourth, but Brown sent a liner back to the mound for the third out. Davis registered the first three-up, three-down inning of the game when the Reds sent fly balls to each of the Cardinals outfielders in the Cincinnati fourth.

The Cardinals tied the game in the fifth inning. Gutteridge led off with a bouncing ball to Myers. The Reds shortstop made his third error of the game when his throw sailed over McCormick’s head at first base. Enos Slaughter doubled to right field, advancing Gutteridge to third. Joe Medwick hit a sharp grounder to Frey, who held the runners and threw to McCormick for the first out. After an intentional walk to Mize, Padgett flied to Berger. Gutteridge scored and the game was tied. 3-3. Moore popped up to Myers for the third out.

The Reds reclaimed the lead in the bottom of the sixth. Berger doubled off the scoreboard in left field and advanced to third on Myers’ infield single. With runners at the corners, Derringer’s drive to Slaughter had enough distance for Berger to come home on the out. The Reds failed to add to their 4-3 lead when Werber popped up in foul territory and catcher Padgett gunned down Myers as he attempted to steal second.

The Reds defense proved to be the story of the Cardinals’ seventh. The inning started simply enough when Slaughter popped out to Werber. Medwick followed with a “terrific smash”2 that appeared headed over the center-field fence. While the ball was out of Craft’s reach, it bounced off the concrete balustrade and rebounded into the outfield. As Medwick raced along the basepaths, Goodman “took the bounding sphere in his bare hand and whipped a perfect peg”3 toward Werber at third base. Werber dived to tag the sliding Medwick, and the Red got his man. Medwick “came up cussing,”4 and reflected later that “it seemed a needless risk to try for third.”5 After Mize and Padgett singled, Moore smacked a grounder toward first base that appeared destined for right field. McCormick’s quick reaction held Moore to a bases-loading single. Frey’s “breath-taking catch”6 of Martin’s fly ball in short right field ended the Cardinals threat.

Baserunning mistakes prevented the Cardinals from pulling even in the top of the eighth. Blades sent Johnny Hopp to the plate as a pinch-hitter for Davis. The rookie doubled into the left field corner, putting himself into scoring position with none out. With Brown showing bunt on the first pitch from Derringer, Lombardi called for a low outside ball on the second. The Reds catcher fired the ball to Myers to pick off Hopp at second base. Two pitches after his leadoff double, “Johnny quickly established a new outdoor record for the distance from hero to goat.”7 Brown rallied the Cardinals by singling into center field, but the Reds defense quickly snuffed out any hope. Gutteridge hit a hard grounder, but that only allowed Frey and Myers “to supply the final fielding thrill by turning in the Reds’ lone twin killing by doubling up the speedy [Brown and Gutteridge] to end the eighth.”8

In the bottom of the eighth, Bob Bowman replaced Davis on the hill to face Craft. The Cincinnati center fielder, battling a sore knee from tripping over a catcher’s mask the previous weekend against Pittsburgh, launched the ball over the left-field wall for his 13th home run of the season. Three flies to left fielder Medwick ended the inning, but Reds had increased their lead to 5-3.

Derringer had yet to get out the side in order, but finally did so in the ninth inning against the heart of the Cardinals order. Slaughter popped up to Myers for the first out. With the count 1-and-2, Medwick stared at a hard, high outside pitch for the second out. Mize went down swinging at three pitches that Derringer claimed were the hardest he ever threw. With the game over and the pennant clinched, Lombardi gave his pitcher an uncharacteristic bear hug before the rest of the Reds arrived to carry Derringer off the field.

In the clubhouse, McKechnie praised the players who completed the Reds’ two-year worst-to-first turnaround. He commented, “This pennant is the best I have ever won. And the hardest. … [I]t was the players who won the pennant, a fine set of boys and a fine set of ballplayers.”9 He promised a fight in the World Series against the New York Yankees. Reds President Powel Crosley Jr., after more than a decade of second-division futility, exclaimed, “This is a new thrill for me!”10 General manager Warren Giles watched the game from the unfinished upper deck and arrived in the clubhouse shedding tears of joy.11 Rube Bressler and Larry Kopf from the 1919 Reds arrived to join the clubhouse festivities.12 Outside Crosley Field, the celebration was underway. “Downtown Cincinnati was littered with all sorts of paper and other objects hurled from the windows of office buildings. Telephone books were torn up and thrown to the streets. In some cases the excited fans forgot to tear them.”13 The Reds departed that evening for a final regular-season road trip before their first World Series in two decades.

In addition to the sources in the Notes, the author also consulted baseball-reference.com, retrosheet.org, and the Cincinnati Enquirer, September 28, 1939.