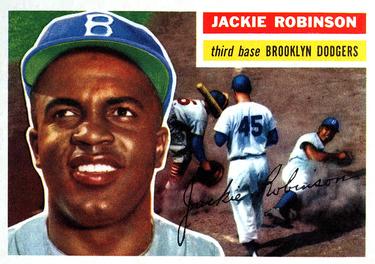 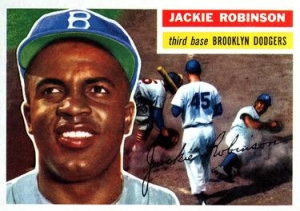 “I saw Robinson coming in. I didn’t move because I had to stay to make the call on the pitch first. That’s why I stayed crouched over. I saw it perfectly. Yogi put the ball at the back of the plate and Robinson slid across the plate into the glove. I’m satisfied I made the call right.” – umpire Bill Summers1

If you were a kid who lived in the New York City area in the early 1950s, you were marked as a fan of the Yankees, Giants, or Dodgers, baseball cards and all. Celebrations of World Series titles became commonplace for faithful Yankees fans. Giants fans reveled in the 1954 World Series sweep over the Cleveland Indians, their first title since 1933. For long-suffering fans of the Brooklyn Dodgers, it was always “Wait ’til Next Year,” a euphemism for baseball seasons gone awry.3

What was different in 1955? The season turned into a “no contest” National League title for the Dodgers. On April 16, four days into the season, they were all alone in first place, where they remained for the rest of the season. The Dodgers won their first 10 games and on May 10 were 22-2, 9½ games ahead of the Giants. Their first-place lead grew to 17 games in early September and they finished the season 13½ games ahead of the second-place Milwaukee Braves.

However for Jackie Robinson, the regular season was the worst statistically of his career. The 36-year-old Robinson’s competitive instincts were as sharp as ever, but his physical skills were diminishing. He knew that his peak years as an athlete were behind him.4 Knee and ankle ailments, perhaps a result of the wear and tear of his multisport playing days at UCLA, forced Robinson to miss playing time in the middle of the season.5 He played in the fewest games (105) of his career, and his season-ending batting average (.256) had never been that low. His streak of six consecutive All-Star Game appearances was broken.

Both teams started their All-Star pitcher in Game One, Whitey Ford (18-7, 2.63 ERA) for the Yankees and Don Newcombe (20-5, 3.20 ERA) for the Dodgers. Although he was a 20-game winner, Newcombe had won only two games in the last two months of the season. Neither pitcher had yet earned a World Series game victory in this rivalry. Newcombe lost twice to the Yankees in 1949 when the Yankees won the World Series in five games. Ford lost Game Four of the 1953 World Series to the Dodgers, but pitched a solid seven innings to a no-decision in the decisive Game Six won by the Yankees for the title.

The teams matched long balls in the second inning when Carl Furillo hit a solo home run off Ford just before Jackie Robinson tripled and Don Zimmer singled for a 2-0 Dodgers lead. In the bottom of the inning, Elston Howard hit a two-run homer off Newcombe to knot the score, but not for long. Duke Snider led off the third inning with another solo home run. Both home runs were memorable. For Howard, it was his first at-bat in a World Series. Snider hadn’t hit a home run since Labor Day and with this one, he became the first National League player with as many as six World Series homers.6

As the game moved to the middle innings, Joe Collins took offensive control for the Yankees with a solo home run off Newcombe to lead off the fourth and a two-run homer in the sixth, scoring Yogi Berra ahead of him for a 6-3 Yankee lead.

It was now time for baserunning to set the tone for this World Series. It was a marker that captured the intensity of the rivalry and the competitiveness of its combatants, including Robinson. With two outs in the sixth, Billy Martin tripled to deep left field off Newcombe. Manager Walter Alston’s confidence in Newk was shaken, and Don Bessent replaced him on the mound. Martin was the last batter Newcombe faced in this World Series.

Martin tried to steal home off Bessent, but was tagged out by Roy Campanella, later to be named the National League’s Most Valuable Player. The fiery Martin took a few steps toward Campanella, but decided instead to retreat to the Yankees dugout. He later said he thought he had been tagged on the throat. After the game in the company of the press, Campanella replied, “Tell that little so-and-so that I missed. I tried to put the ball in his mouth.” Undoubtedly, Campy knew that Martin had labeled him as “spike shy” before the World Series started.7

The Dodgers came to bat in the eighth inning still trailing by three runs. Furillo opened by bouncing a single over second base against Ford. With one out, Robinson grounded through third baseman Gil McDougald’s legs. The error put Robinson on second and Furillo on third. Zimmer’s sacrifice fly to center fielder Irv Noren scored Furillo and advanced Robinson to third. In typical fashion, he danced off the base to disturb Ford. When Robinson darted toward home, Berra, crouched behind the plate, moved forward to receive Ford’s pitch and apply the tag. The safe call by umpire Bill Summers was immediate. The protestations by the Yankees catcher were to no avail.8 The Yankees held their 6-5 lead and won Game One.

For years to come, Yogi would insist that Robinson was out. Dale Berra wrote, “As he always told me, if you get beat, accept it and move ahead. But Jackie, he would say to his dying day, was out.”9 The heartfelt tribute expressed by Rachel Robinson, Jackie’s widow, on the passing of Yogi Berra in 2015 seals the sense of timelessness that this single baseball moment holds. Over the years, she and Yogi would often greet each other with a humorous exchange – “He was out/He was safe.”10

What did this steal of home say about baseball strategy? Trailing by two runs, Robinson well understood that his steal was not the best baseball strategy, but “whether it was because of my stealing home or not, the team had a new fire.”11 Second-guessing was immediate. Fred Haney, deposed manager of the Pirates, and Chuck Dressen, manager of the Senators, differed in their appraisal when interviewed on Bill Stern’s radio show after the game. “Haney called it a ‘stupid’ move, while Dressen upheld it as a move that had an upsetting influence on the Yankees.”12 But broadcaster Harry Caray captured it best: “Perhaps never in the history of the World Series has one man played such a unique role as has Jackie Robinson this year … through the inspiration of his own play … his own daring and imagination.”13

Robinson started the first six games of the Series at third base with a weak batting average of .182, four hits, and one dramatic steal of home. He did not play in Game Seven when Elston Howard’s groundout, Pee Wee Reese to Gil Hodges, in the ninth brought the Brooklyn Dodgers their first and only World Series title.14 But “42” was right in the middle of the mob scene just off the pitcher’s mound.15 Robinson wrote, “It was one of the greatest thrills of my life to be finally on a World Series winner.”16 There is no doubt that Jackie Robinson always understood the meaning of the moment, standing up to all he had to endure since 1947, stealing home in Game One of the 1955 World Series, and celebrating a championship with his teammates right in the middle of the diamond.

The steal of home, arguably baseball’s most exciting play, and the home run are the only plays in baseball on which one player single-handedly changes the score. There is no better example than Jackie Robinson’s steal of home in Game One of the 1955 World Series. Robinson stole home on 19 other occasions in his 10-year career, 1947-1956.17 His name became synonymous with the play.

However, the baseball record book looks no differently at a single runner stealing home or a double-steal play in which one runner steals home. Players see it differently. The San Francisco Giants’ Aaron Rowand thought back to one of his successful attempts to steal home. “Oh, yeah,” he said finally. “Off a double steal. It wasn’t a Jackie Robinson.”18

The author accessed Baseball-Reference.com for box scores/play-by-play information (baseball-reference.com/boxes/NYA/NYA195509280.shtml) and other data, as well as Retrosheet.org (retrosheet.org/boxesetc/1955/B09280NYA1955.htm). Baseball Almanac (baseball-almanac.com/recbooks/rb_stbah.shtml) notes that “Stealing home plate is NOT an officially recorded statistic so research into this unusual feat is still considered on-going.”

3 Paul Dickson, The Dickson Baseball Dictionary, 3rd Edition (New York: W.W. Norton & Company, 2009), 918. “A Willard Mullin cartoon (New York World-Telegram, August 9, 1939) depicted a character in a Dodgers uniform claiming that his theme song was ‘Wait ’Till Next Year: A Torch Ballad in One Flat’ with words and music by The Dodgers.”