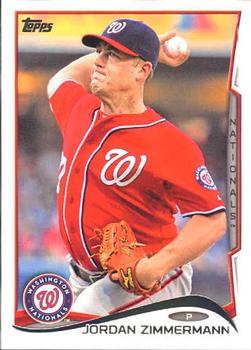 Meaningful and meaningless — a combination of both usually characterizes the last game of any regular season, and 2014 was no exception. This game was played with crowded dugouts and bullpens, the result of expanded major-league rosters in September that can often lead to game strategies not otherwise available. The no-hitter is unlike other statistical gems that emerge from baseball’s history books when we are on the verge of a new record being set. Its possibility exists for every game played, but on this Sunday afternoon, as always, its occurrence must wait for the last batter in the last inning.

The Washington Nationals were in full preparation mode for hosting the San Francisco Giants in five days in the first game of the National League Division Series. The Miami Marlins were going to finish fourth in the National League East and were just “playing out the string.”1

Jordan Zimmermann (13-5, 2.78 ERA) took the hill for the Nationals having won his last seven decisions after a loss to the Philadelphia Phillies on July 11. However, the start came just seven days after a line drive bruised his right shoulder in a game against the Marlins in Miami.2 Manager Matt Williams planned to pull Zimmermann after five or six innings to preserve him for a planned start in six days against the Giants in the second game of the NLDS.3 As it would turn out, Williams just couldn’t do that. Zimmermann’s mound opponent was Henderson Álvarez (12-6, 2.70 ERA). His only career win against the Nationals came in his most recent outing against them, on July 29, when he dominated and surrendered only three hits in seven shutout innings.

The irony of this matchup was that Álvarez closed the 2013 season by pitching a 1-0 no-hitter against the Detroit Tigers at Marlins Park in the oddest of manners. Detroit reliever Luke Putkonen uncorked a wild pitch to enable Giancarlo Stanton to score the game’s only run in the bottom of the ninth inning, the final pitch on the final day of the regular season.4 It was the first complete-game no-hitter decided in walk-off fashion since Detroit’s Virgil Trucks did it in 1952.5

The Nationals’ first hit of the game was all that Jordan Zimmermann would need on this day. Ian Desmondhit his 24th homer of the season to deep left-center in the second inning and the Nationals led 1-0. The first Nationals starter to come out of the game was center fielder Denard Span. After his third-inning double down the right-field line, Nate Schierholtz came in as a pinch-runner as Span left the field to a thunderous ovation. He was assured of finishing the season with a .302 batting average and leading the league with 184 hits and a career-high 31 stolen bases as the Nationals’ leadoff hitter.

As the game proceeded, there were only two blemishes on Zimmermann’s performance. One came in the top of the fifth inning when he walked Justin Bour with two outs. Bour was the only Marlins batter to reach a three-ball count for the entire afternoon. The other came in the seventh inning when Zimmermann struck out the side but Garrett Jones reached base on a wild pitch after swinging and missing. However, Zimmermann picked off Jones with Reed Johnson at the plate to end the inning. Zimmermann was throwing strikes and pitching at a pace that would lead to a quick game, 2:01, and the fastest Nationals game all season long.

Meanwhile, the Nationals were getting hits in every inning against Álvarez, 11 in total, without pushing across any insurance runs for Zimmermann. After Desmond’s home run in the second inning, it wasn’t until the eighth inning that relieverA.J. Ramos retired the Nationals in order. 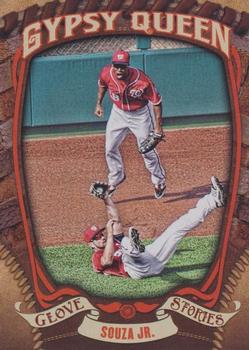 As the Nationals took the field in the top of the ninth inning, rookie Steven Souza replaced Ryan Zimmerman in left field. Zimmerman suffered a severe hamstring injury on July 22 in Colorado and had played only four games in left field since returning to the lineup on September 20. In a pregame ceremony three days earlier, Souza had been honored as the Nationals’ minor-league player of the year.6 With that prophetic move, manager Matt Williams had used 17 players and replaced everyone in the Nationals starting lineup with the exception of catcher Wilson Ramos and Jordan Zimmermann.

The first batter in the top of the ninth, Adeiny Hechavarria, grounded out to second base for the first out. Jarrod Saltalamacchia, pinch-hitting for A.J. Ramos, flied out to deep center field, where Michael A. Taylor caught the ball just a few steps short of the warning track. As the game approached the last out of the last inning, the stage was set for the most dramatic of finishes. Christian Yelich drove a 2-and-1 count 94-mph fastball to deep left-center. Zimmermann immediately thought “no-doubt double” as Souza turned and sprinted.7 He dove backward and horizontal to the ground for the first time ever before flopping to the turf in front of the Marlins bullpen.8 The umpires, the fans, Zimmermann, and his teammates knew he had caught the ball when he lifted his black glove into the air.

Zimmermann needed only 104 pitches and threw only 25 balls. He struck out 10 and allowed only five balls to leave the infield. Wilson Ramos was ecstatic since it was the first no-hitter he had caught in the minors or the majors. “I’m very excited for this day,” Ramos said. “That last inning, I didn’t care about my at-bats. Groundballs, double plays, I don’t care about that in that moment. I was concentrating on just calling a good game. For the catcher, it’s more important to call the game than to hit. I’m happy for what I did today only for my defense. I feel happy.”9

Zimmermann’s no-hitter was the first by a Washington major-league pitcher since Bobby Burkeno-hit the Boston Red Sox on August 8, 1931. In fact, Burke was the first and only Senators pitcher to toss a no-hitter at Griffith Stadium.10In addition to the no-hitters thrown by Jordan Zimmermann and Henderson Álvarez there have been three other no-hitters thrown on the final day of the regular season.11

In his next start, on October 4 in the second game of the NLDS, Zimmermannwas stellar and exhibited no ill effects. He pitched 8⅔ innings, limiting the Giants to three hits. But Drew Storen, who relieved Zimmermann with two outs in the ninth, yielded the game-tying hits and the Nationals would eventually lose 2-1 in 18 innings. The Nationals season ended three days later in San Francisco when a 3-2 loss gave the Giants the NLDS as its first step toward the eventual 2014 World Series crown.

Perhaps the postseason loss by the Nationals dulled the memory of excitement that fans felt about Souza’s catch and what Zimmermann had accomplished. But baseball history has a way of remembering. Washington Post reporter Adam Kilgore described it well. “He dove, flying in the air, and snared the ball. He lifted his glove. Zimmermann thrust both arms into the air. The 35,085 people in the seats mimicked him. History had been saved.”12

Among the crowd, I settled into my seat in Section 206 during the first inning after helping the Washington Nationals Dream Foundation sell tickets for their annual season-closing fundraiser, Jerseys Off Their Backs. On this Sunday afternoon, baseball superstition dictated that I not leave that seat until the very last out ensured that one lucky fan went home with a very special Jordan Zimmermann game-worn jersey.

The author accessed Baseball-Reference.com for box scores/play-by-play information (baseball-reference.com/boxes/WAS/WAS201409280.shtml) and other data, as well as Retrosheet.org (retrosheet.org/boxesetc/2014/B09280WAS2014.htm).

1 Paul Dickson, The Dickson Baseball Dictionary, 3rd Edition (New York: W.W. Norton & Company, 2009), 657. The expression to note that a team continues to play although it is not in contention was first used by Edward J. Nichols, New York Tribune, September 15, 1912.