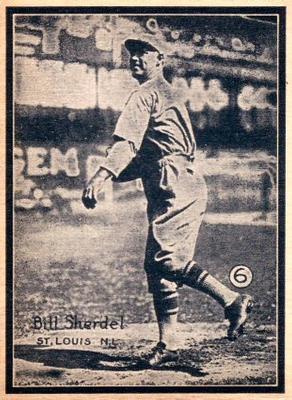 Based on their franchise history, the St. Louis Cardinals didn’t expect to be a factor in a National League pennant race in 1921. Yet that’s exactly where they found themselves in the last week of the season. The Cardinals were in third place, relevant in the NL race for the first time in their history.

Meanwhile, the New York Giants and Pittsburgh Pirates had battled for the league lead for practically the entire season and were still vying for first place during the final week. But the surprising Cardinals dashed the Pirates’ chances of overcoming the Giants with a doubleheader sweep at Sportsman’s Park on September 29.

St. Louis entered 1921 having been a second-division club for all but three seasons since their entry in the National League in 1892.1 They had finished in last place or next to last 15 times. Against this backdrop, their third-place finish in 1921 — equaling their record for their highest finish ever (in 1914 and 1917) — was somewhat of an accomplishment for the club.

The Cardinals got off to a poor start (2-9) in April of 1921 and suffered a losing record (13-15) in July. But after posting a 20-11 record for August, manager Branch Rickey’s team secured third place with a doubleheader win on September 1 (although they were still nine games out of first place). Despite a 20-7 record in September, they were unable to make a substantial gain against the Giants and Pirates.

Pittsburgh had held sole possession of first place for all but two days between April 21 and September 5. From May 14 through September 8, the Giants occupied second place except for three games when they temporarily held the lead. The Giants swept the Pirates in a five-game series in late August and overtook Pittsburgh for good on September 9.

Entering the doubleheader games on September 29, the Pirates trailed the Giants by only 3½ games, making them still mathematically eligible to win the pennant with five games remaining. The Giants had an offday, with four games remaining on their schedule. Since the Cardinals were already out of the running for first place, their main role was that of potential spoiler.

The Cardinals squeaked by the Pirates in the first game of the doubleheader, 5-4, on a 10th-inning walk-off home run. They had jumped to an early lead against 21-game winner Wilbur Cooper before the Pirates pulled ahead in the seventh. After tying the score, 4-4, in the bottom of the seventh, the Cardinals won in the 10th won on a leadoff homer by Joe Schultz. The Pirates’ loss meant they would have to win all of their remaining games to overtake the Giants. But St. Louis would have more to say about their ultimate fate.

The critical second game pitted the Cardinals’ Bill Sherdel against the Pirates’ Johnny Morrison. Sherdel, who had primarily been used in relief throughout the season, got his eighth start. Morrison, a 26-game winner for Birmingham in 1920, had won nine games in his first full season in the major leagues.

St. Louis put a run on the board in the bottom of the first. Jack Smith singled and stole second. After Jack Fournier walked, Milt Stock singled Smith home. When Rogers Hornsby walked to load the bases with no outs, it appeared that the Cardinals would add to their lead. But Heinie Mueller hit a groundball to first base that turned into a timely double play — Possum Whitted to catcher Tony Brottem back to Whitted. The Cardinals stayed alive when Morrison plunked Austin Henry to load the bases again, but Doc Lavan forced McHenry at second to end the inning without another Cardinals run.

In the bottom of the fourth, Sherdel singled Verne Clemons home to make the score 2-0, and the Cardinals added another run in the fifth. Fournier walked and went to second on Stock’s sacrifice. Mueller made up for his first-inning double play by singling Fournier home for the Cardinals’ third score.

Sherdel was efficient through the first five innings, yielding only four hits to the Pirates, with no free passes. With darkness approaching in the guise of ominous storm clouds, the Pirates threatened to get back into the game in the sixth, when Carson Bigbee doubled to right-center and advanced to third on Max Carey’s fly out. Rabbit Maranville followed with a fly ball that scored Bigbee. Kiki Cuyler got on base on third baseman Stock’s error, but George Cutshaw rolled out to Hornsby to end the inning.

With an official game in the books, umpire Bill Klem immediately called the game on account of darkness, with a final score of 3-1. He must have drawn on his amateur weather-forecasting skills, because 10 minutes after the game ended, a rainstorm flooded the field.

The Cardinals were aided by the Pirates’ seemingly tentative play, possibly stemming from their mediocre performance during the last few weeks of the season. The St. Louis Globe-Democrat characterized the Pirates’ play in the field as “stacked up like frightened rabbits.”2

The loss put the final nail in Pittsburgh’s coffin for the season. Since the Giants didn’t play that day, the Pirates fell to 4½ games behind New York. With only three games remaining, the Pirates had no further chance to catch them, and New York claimed the pennant.

The Cardinals won their sixth straight against the Pirates on Rogers Hornsby Day on September 30, pulling within two games of the second-place Pirates. But a tie game on October 1 and a Pittsburgh win the next day eliminated their chance to draw even with the Pirates in the standings and earn a larger share of the World Series receipts.

St. Louis finished the season with an 87-66 record, with one tie. It was a decidedly successful season, since they recorded their highest number of wins to that point in the franchise’s National League history. Historians consider the season part of a turning point for the future of the franchise, which became one of the winningest clubs over the next 15 seasons. The season also marked the first time in St. Louis baseball history that both the Cardinals and Browns finished in the first division of their respective leagues in the same year.

In addition to Baseball-Reference.com, the author consulted the following:

1 The St. Louis Cardinals franchise in the NL was originally known as the Browns from 1892 to 1898. They were known as the Perfectos in 1899 and started 1900 as the Cardinals.