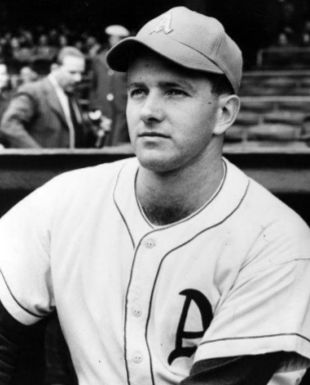 “It was all my fault,” Philadelphia Athletics first baseman Ferris Fain said in a postgame interview. “I threw the ball while I was still pivoting, and it was five full feet from the bag.”1 The 26-year-old rookie was lamenting his second-inning error on a groundball off the bat of Stan Spence that allowed the Washington Senators center fielder to gain first base. The miscue proved to be the difference between Athletics rookie Bill McCahan and the sixth perfect game in major-league history. Even the opposition took a conciliatory tone afterward. “I’m sorry I had to be the one to spoil [it],” Spence said. “I was just trying to make a base-hit.”2

When this day started, the chances of such a historic event being played out in Philadelphia’s Shibe Park before the tiny crowd of 2,816 seemed most unlikely. Thirty years had passed since the Senators were handcuffed by a no-hitter when Boston Red Sox righty Ernie Shore famously relieved Babe Ruth after just one batter on June 23, 1917. The odds were even greater considering that up until this year only six no-hitters had been twirled by a rookie. Two months earlier, McCahan was on the losing end of Cleveland Indians righty Don Black’s gem, one of the few pitchers to be on both the winning and losing ends of a no-hitter in the same season.

Neither team was in contention for the American League pennant. Entering the day, Philadelphia was at exactly .500 (65-65) and in fifth place, 18 games behind the Yankees. The Senators were seventh, 27½ games back, with a record of 55-74.

It was a close game nonetheless. The game’s outcome remained in doubt throughout the entire 1- hour and 26-minute affair as Senators hard-luck hurler Ray Scarborough kept the Athletics popgun offense in check for most of the game. In the second inning, Philadelphia capitalized on two of Scarborough’s four walks to take a 1-0 lead before the righty settled down to hold the Athletics scoreless over the next four frames. But a one-out single by McCahan in the seventh ignited a two-run rally with the key blow being a bases-loaded double to right by outfielder Elmer Valo.

In the top half of the inning Valo, who was appearing in his first game since an August 9 beaning by Senators right-hander Sid Hudson, had provided the fielding heroics with a spectacular catch against the right-field scoreboard that robbed Senators first baseman Mickey Vernon of a sure extra-base hit. Other fielding gems were recorded by second baseman Pete Suder and center fielder Sam Chapman. But the true hero this day was McCahan, who claimed afterward that he had not given a thought to a no-hitter before the ninth inning. “Then I bore down,” the husky hurler said. “[U]ntil that time I was just trying to win a ballgame.”3

Senators manager Ossie Bluege brought in three consecutive pinch-hitters to face McCahan in the ninth. None of the three got the ball out of the infield. The first flied out to shortstop, the second grounded to second, and McCahan struck out Cecil Travis to win the game. He’d faced 28 batters in all, one over the minimum, Spence reaching on the error in the second inning.

McCahan’s journey from a former high-school phenom to a promising major-league hurler began in 1938 when his uncle Izzy Hoffman, a former major-league outfielder, arranged a tryout for his nephew in front of Athletics skipper Connie Mack. Immediately enamored, Mack arranged for McCahan’s four-year tuition at Duke University, where the youngster could develop under Blue Devils manager and former Athletics ace Jack Coombs. A successful collegiate career, followed by an equally successful stint pitching for US Army Air Corps clubs during World War II, quickly made McCahan a “can’t miss” prospect. The label appeared even more fitting on September 15, 1946, when, in his major-league debut, he outdueled Bob Feller in a 2-0 shutout win.

In 1947 McCahan’s path to stardom was slowed by the extraordinarily large number of rainouts he was forced to endure through the first half of the season. In July, when the weather finally began to cooperate, McCahan established himself as one of the Athletics’ prized young hurlers as he won seven of nine decisions prior to his historic September performance.

But fate would not shine as brightly throughout the remainder of McCahan’s career. An offseason job lifting 100-pound oil drums increased his muscle tone to the point where it adversely affected his delivery. By the following spring he was struggling “like a man pushing a shot instead of [throwing] a baseball.”4 McCahan compiled a record of 5-8, 5.11 over the next two seasons before being demoted to the minor leagues. He never returned.

In the postgame glow of his brilliant September 3, 1947, performance McCahan said, “[s]ome day someone may batter my brains in, and it’s possible I’ll lose a few.”5 The words proved sadly prophetic following his rookie season as McCahan never attained the stardom that was once predicted for him.

In addition to the Sources cited in the Notes, the author relied on Baseball-Reference.com and Retrosheet.org.

Thanks to Scott Johnson for pointing out an error in the original version of this article.