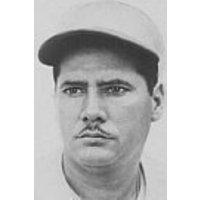 It was in Philadelphia, it was late September, and it was at Shibe Park, but it involved the Phillies1 and it happened at the end of the 1945 wartime season, not in 1941 — when Ted Williams sealed his .406 campaign against the A’s and the United States had not yet known World War II. Nobody was paying attention to a Cuban national who had come to the major leagues as a pitcher and capped a season in which he had been a pinch-hitter par excellence, part-time outfielder, and mop-up reliever for the hapless Phillies.2

René Monteagudo had hit .370 for Washington’s Southern Association Chattanooga club in 1944 after the Senators had signed him as a 22-year-old left-handed pitcher out of Cuba in 1938.3 By 1940, though, “his good left arm went dead. After laying off a year, Monteagudo came back as an outfielder—and maybe a good thing, too.”4

The Phillies managed to pluck the intriguing prospect, now 29, from the Washington organization. He opened the 1945 season as Philadelphia’s right fielder, batting third in the order and driving in his team’s first run in the first inning as the Phillies kicked things off with an 8-2 loss on April 17 at Brooklyn. Monteagudo started the first three games of the season in right field before yielding to Vance Dinges and Jimmy Wasdell and settling in as manager Freddie Fitzsimmons’s first choice to pinch-hit. He did that extremely well, a rarity for anything pertaining to that year’s Phillies. His 18 pinch hits led major league baseball in 1945.5

Monteagudo had another tour as a starter at both corner outfield posts in June and early July before returning to pinch-hitting duties. But on September 22 at Brooklyn, new player-manager Ben Chapman, who had replaced Fitzsimmons after 69 games,6 started him in right field and batted him fifth. The Phillies won that game, so Chapman gave Monteagudo another start the next day in the first game of a doubleheader.

That move did Dodgers’ starter Hal Gregg no favors, as Monteagudo spoiled what would have been a no-hitter when he drilled “a line single in the second inning that (second baseman) Ed Stanky made a desperate attempt to catch.”7

The slightly built (5’ 7”, 165 pounds) left-handed hitter was a useful player to have around for a team just trying to make it through the last, and most depleted, season of wartime baseball. Thirteen days earlier on September 10, while Monteagudo continued to excel as a pinch-hitter, Chapman had called on him to pitch 6⅔ innings in “take one for the team” relief of fellow Cuban Izzy Leon, who couldn’t get out of the first inning in Pittsburgh. Monteagudo didn’t dazzle, but he gave it all he had with the pitching arm that had deserted him in 1940; he allowed seven runs, but only four of them earned, on nine hits and four walks. He kept his batting stroke, though, and collected two of the Phillies’ hits while handling the mound chores.

Over the 1945 season, Monteagudo pitched in 14 games for Fitzsimmons and Chapman, typically in long relief with the game far out of reach. His first mound appearance was on May 29 at St. Louis. The September 10 appearance in Pittsburgh was his last and longest stint as a pitcher. He had no pitching decisions for the season.

Chapman seemed to have a rare good thing going, so he had Monteagudo in his starting outfield again in the September 23 nightcap at Brooklyn, this time hitting seventh. The pencil-mustached Havana native paced Philadelphia’s 46th and last win of the season with a double, two singles, and two runs scored.

The Phillies then returned home. Due to late-season schedule gaps and some rain, they waited for five days before the Dodgers came to town for a two-game series at Shibe Park that would mercifully close the season.

Chapman started his new go-to guy again on September 28; Monteagudo delivered a single in three at-bats. His batting average had been as low as .125 on May 5 and he had never reached .300, but the September 28 hit boosted the average to .298 with a game left in the season. After an off-day on September 29, Monteagudo was back in right field, again fifth in the order, for the season finale on a chilly Sunday.

Hal Gregg had come around again in the Brooklyn rotation. Chapman countered with Hugh Mulcahy, a Philadelphia fan favorite who had missed the 1941-44 seasons due to military service. He mustered out on August 5, 1945, and returned to the Phillies on August 11.8 Mulcahy had played some service baseball and Chapman eased him back into the rotation. He was coming off a complete game 4-0 loss in the recent series at Brooklyn and stood 1-2 on the season when Chapman gave him the ball on September 30.

The dogged “2,241 frost-bitten fans” who had turned out9 saw Gregg and Mulcahy match goose eggs through four innings. Monteagudo flied out to center in the second, but with one out in the fourth, he singled Tony Lupien to third base before Gregg struck out Andy Seminick and retired Nick Picciuto on a groundout to end the threat. But four straight Brooklyn singles, a Philadelphia error, and a three-run double by Frenchy Bordagaray with one out gave the Dodgers four quick runs in the top of the fifth inning off Mulcahy.

The Phillies went quietly, countering with their only run of the game in the seventh on a Lupien single, losing 4-1.

Monteagudo was due to bat third in Philadelphia’s half of the sixth, but with one out and a runner on, Chapman inserted himself as a pinch-hitter and worked a walk. That ended Monteagudo’s season, but his fourth-inning single had lifted him to a .301 batting average. Unlike Ted Williams’s heralded accomplishment in 1941, René Monteagudo’s was more pedestrian and lost in the mists of a forgettable season. Monteagudo’s year remains, nonetheless, a part of baseball history with his timely pinch-hitting and willingness to take the ball in long relief whenever asked, evidence of what versatile perseverance over the long haul of a losing season of epic proportions (46-108) can accomplish.

Montegaudo probably couldn’t have anticipated it at the time, but that September 30 single came in his last major-league at-bat. The Phillies went through a “drastic shakeup”10 for 1946 while Monteagudo was playing in the Cuban Winter League. Apparently no longer in the club’s plans, he listened attentively to the overtures of Jorge Pasquel, a promoter for the outlaw Mexican League actively trying to raid the majors.

After signing with Pasquel, Monteagudo played in Mexico with the Torreon club in 1946, becoming one of the infamous 13 major-league contract “jumpers” banned from baseball for five years by Commissioner A. B. “Happy” Chandler.11 Monteagudo continued to play in Mexico through the 1949 season. That October, the prospect of potentially adverse results from lawsuits challenging the ban moved Chandler to settle and give the banned players amnesty.12 Monteagudo got back into Organized Baseball in 1950 with Havana in the Florida International League. The next season, he finished his playing career at age 35 with Galveston in the Gulf Coast League; there, he hit .262 in 187 at-bats and, still willing to pitch with an arm that had seen far better days, had a 7-11 win-loss record.

The idea for this account came to me as I read SABR’s collaborative 100: The 100 Year Journey of a Baseball Journeyman, Mike Sandlock (2016), a project of the Connecticut Smoky Joe Wood SABR chapter, edited by Karl Cicitto with Bill Nowlin and Len Levin as associate editors. As I read about Mike Sandlock, the name of René Monteagudo popped up in box scores of games in which Sandlock played against the Phillies as a member of the Brooklyn Dodgers in 1945. Never having encountered Monteagudo but always interested in obscure ballplayers, I checked his Baseball-Reference pages and learned that he arrived in the major leagues as a pitcher. Yet here he was as an outfielder, productive pinch-hitter, and sometimes pitcher with the woeful 1945 Phillies. There had to be a story there.

In addition to the sources cited in the Notes, I used the Baseball-Reference.com and Retrosheet.org websites for box scores, player, team, and season pages, pitching and batting logs and other material in this account.

1 The Phillies were also known as the Blue Jays during the 1944 and 1945 seasons. The club used a fan contest to select the name in an effort by new club president Bob Carpenter Jr. to boost fan interest. In 1944 and 1945 the uniform logo continued to include “Phillies,” but also featured a blue jay perched above the script. By 1946 the blue jay was gone from the uniform logo. The “experiment was officially abandoned by the club on January 10, 1950.” Todd Radom, “Sports Logo Study #2 – 1944 Blue Jays/Phillies,” Radom Thoughts blog, toddradom.com, accessed February 24, 2017.

2The 1945 Phillies were 46-108 and finished in the National League cellar, 52 games behind the pennant-winning Cubs and 15 games out of seventh place.

3 Monteagudo was a product of Clark Griffith’s scouting forays into Cuba in the middle and late 1930s. He was signed out of Havana, started in Class A with Trenton (Eastern League) in 1938, and was 19-10 there before a September call-up. On September 6, 1938, he spun a 14-hit, three walk, 7-5, complete game win over the Red Sox in his major-league debut. He was 18-10 back in the Eastern League with Springfield in 1939.

4 Art Morrow, “Monteagudo Reports To Phils,” Philadelphia Inquirer, March 22, 1945: 22.The 1944 Southern Association was a hitter’s league—Monteagudo’s .370 for 1944 Chattanooga was only the third best batting average in the league.

6 Under Fitzsimmons the Phillies were 18-51. Chapman finished up slightly better, at 28-57. Chapman, 36, a former five-time American League All-Star outfielder, was acquired by the Phillies from the Dodgers on June 15 and installed as manager on June 30. He played in 24 games for the 1945 Phillies. By this point in his career he was trying his hand at pitching—starting seven games for the Dodgers and pitching seven innings in three games for Philadelphia.

11 “13 Jumping Beans Placed On O. B. Ineligible List,” The Sporting News, May 15, 1946: 5. Sal Maglie became probably the best-known of the “jumpers.” Maglie, a late arrival to the majors at age 28 in 1945, won five games for the New York Giants that season. He pitched two seasons in Mexico, then a year in the Provincial (Canada) League. He returned to the Giants at age 33 in 1950 and over the next nine seasons won another 114 games with them, the Brooklyn Dodgers, the New York Yankees, and the St. Louis Cardinals. Maglie pitched in three World Series, two with the Giants (1951 and 1954), one (1956) with the Dodgers. (The 13 players listed in The Sporting News item and an Associated Press story published in several U.S. newspapers on May 10, 1946, were all former major leaguers. Five players from Organized Baseball’s minor leagues were also banned for playing in Mexico in 1946. See: July 10, 2004, SABR-L post by Merritt Clifton citing a “Year 1949 In Review” article in the 1950 Baseball Guide and Record Book noting a total of 18 banned players.)