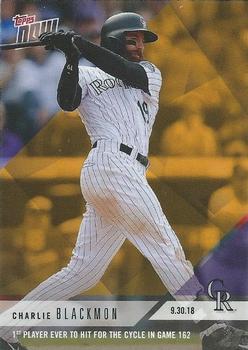 Does the higher altitude at Denver’s Coors Field translate to more home runs? In the 2018 regular season, the Colorado Rockies played 81 games there, and fans saw a total of 212 balls go over the walls (from both the visiting and home teams), second only to Cincinnati’s Great American Ball Park (218).1

On September 30, 2018, the last day of the regular season, five balls left the yard in Denver, each driven well beyond the boundary of the outfield. One belonged to Rockies leadoff batter Charlie Blackmon; it was one of four hits in his cycle. Blackmon’s performance was historic for another reason. Coors Field had now hosted more batters who hit for the cycle than any other ballpark in major-league history.

Bud Black’s 2018 Rockies had been in first place when the month of May ended, but the team hit a slump in June, dropping to fourth in the NL West standings. They turned it around and by mid-September were in a fierce pennant race with the Los Angeles Dodgers. On the morning of September 30, Colorado and Los Angeles owned identical records of 90-71. Colorado was in the hunt for its first-ever division title in 26 seasons of existence, playing the Washington Nationals in its final home game of the regular season.

Left-hander Tyler Anderson started for the Rockies. He had been sidelined with a sore shoulder for about a week before this appearance,2 and before that, he had lost his last six decisions, dating back to August 4. For the visitors, righty Erick Fedde had the mound duties. He had split the season playing for three teams: the Double-A Harrisburg Senators (Eastern League), the Triple-A Syracuse Chiefs (International League), and the Nationals. He was making his 11th appearance (all starts) for Washington, bringing a 5.24 ERA with him.

The Nationals put two runners on base in the opening frame when Victor Robles and Trea Turner each singled, but Bryce Harper’s groundball double play ended any threat. Colorado’s Blackmon wasted no time in starting his historic performance. Leading off the bottom of the first inning, he pulled a 1-and-0 pitch into the right-field corner for a triple, his seventh of the season.3 Two outs later, Nolan Arenado launched a home run to deep left, his league-leading 36th of the season. The Rockies had all the runs they would need to win the game.

Anderson walked Anthony Rendon and Juan Soto in the second, but Adrián Sanchez lined to Anderson for another double play and an abrupt end to the inning. In the bottom of the third, Anderson led off by lining a single into left field. Blackmon, on another 1-and-0 pitch, drove the ball toward deep right-center field. His 29th home run “didn’t take very long to clear the out of town scoreboard,”4 giving Colorado a 4-0 lead.

Two innings later, with Tim Collins now in relief of Fedde, Blackmon led off by beating out a weak grounder up the middle. Nats second baseman Sanchez scooped up the ball and threw to first, but the throw pulled first baseman Mark Reynolds off the bag as Blackmon crossed the sack. Blackmon was credited with an infield single. DJ LeMahieu also singled to center, and David Dahl followed by hitting a fly ball deep down the left-field line for a three-run home run (his 16th). Colorado led, 7-0.

The Rockies added two more runs in the bottom of the seventh, when Arenado hit his 37th homer of the season with one out and the next batter, Trevor Story, smacked his 36th. The Rockies now had nine runs, and all of them had been driven in by the long ball.

Anderson started the eighth by walking Reynolds and yielding a single to Sanchez. Although Anderson retired the next two batters, Seunghwan Oh was summoned from the bullpen to get the final out of the inning.

The Rockies continued their attack in the eighth inning. Chris Iannetta doubled to left and advanced to third on a wild pitch. Pinch-hitter Matt Holliday walked, bringing up Blackmon. The Colorado center fielder had struck out in his previous at-bat, but now he jumped on Kyle McGowin’s first pitch. Much of the crowd jumped to their feet as Blackmon pulled a two-bagger down the right-field line. Iannetta scored and Noel Cuevas, running for Holliday, halted at third. With the double, Blackmon joined the ranks of Rockies batters who had hit for the cycle. The crowd gave him a standing ovation as he trotted off the field. (Manager Black inserted Raimel Tapia as a pinch-runner for Blackmon.)

But the Rockies weren’t finished. LeMahieu’s sacrifice fly to left scored Cuevas, and Story’s two-out single brought Tapia home. Colorado’s Chris Rusin closed out the ninth inning, preserving the shutout. The Rockies had won decisively, 12-0. They collected their ninth W in their last 10 games and their 91st win of the season, second-most in the team’s history.5 Anderson earned his seventh win of the season, his first victory since July 4.

By getting a single, double, triple, and home run, Blackmon had become the ninth batter in franchise history to have accomplished the rare feat, coming one season after Arenado’s “cycle for the ages.”6 It was also the 18th time a batter had hit for the cycle at Coors Field, passing Boston’s Fenway Park (17) as the venue that has hosted the most cycles.7 This was Blackmon’s only four-hit game of the season, and it came at home, in front of 47,833 screaming fans. Teammate Carlos González, who himself had hit for the cycle in 2010, told reporters, “Charlie is a really hard worker and we understand how much work he puts in. When he does something special on the field, we all feel really proud.”8

Unfortunately for the Rockies, the Dodgers blasted the San Francisco Giants, 15-0, in their final game, so the two teams stayed tied for the West Division lead. The next day, October 1, Colorado and LA played a one-game playoff at Dodger Stadium to determine who would claim the division title. Both teams were headed to the postseason; however, one would be division champion while the other had to play a wild-card game to continue. The Rockies hit two more home runs in that game, but so did the Dodgers, who prevailed 5-2, before 47,816 spectators. Los Angeles pitching held the Rockies batters to just two singles (both by Blackmon) before Arenado and Story hit back-to-back solo homers in the top of the ninth inning, but it was too little, too late. The Rockies won their wild-card game over the Chicago Cubs but lost to the Milwaukee Brewers in the National League Division Series round.9 Meanwhile, the Dodgers advanced to the 2018 World Series, but they were defeated by the World Series champion Boston Red Sox in five games.

Video highlights of Blackmon’s cycle can be found at mlb.com/news/charlie-blackmon-hits-for-cycle-in-game-162-c296674490.

9 When the regular season ended, both the Cubs and Brewers had tied for the NL Central Division title, with identical 95-67 records. As the Rockies battled the Dodgers on October 1, the Brewers traveled to Chicago for a one-game tiebreaker. The Brewers won, 3-1.