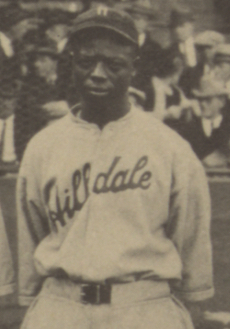 Phil Cockrell, raved the Philadelphia Inquirer, “drew transportation to the mythological ‘Hall of Fame’” following his overpowering no-hitter to lead the Hilldale club over the visiting Detroit Stars in the afternoon contest of a Labor Day doubleheader in 1921.1 Described as a “moist ball artist,” Cockrell was one of the most renowned and successful spitball practitioners in Black baseball, yet his almost two-decade career as pitcher has been largely overlooked.2

Standing just 5-feet-8 and weighing 160 pounds, Cockrell began his professional baseball career with the independent New York Lincoln Giants in 1917.3 The following season Ed Bolden, owner and general manager of the independent Hilldale club in South Philadelphia, acquired the 23-year-old native Georgian right-hander. For 15 seasons, from 1918 to 1932, Cockrell was a mainstay for Hilldale, one of most successful Black major-league teams in the 1920s.

As Michael Haupert has demonstrated in his thorough history of Hilldale’s ownership, Bolden chose not to join Rube Foster’s nascent Negro National League in its inaugural season in 1920 so that he could retain lucrative booking deals with East Coast clubs and avoid expensive travel commitments to the Midwest.4 Foster, the owner of the Chicago Elite Giants, and Bolden subsequently engaged in a feud, prompted by the former’s raid on Hilldale’s roster of players. In 1921 Bolden and Hilldale joined the NNL as an “associate member,” which guaranteed mutual recognition of contracts and also permitted the club to book games against NNL teams.5 Hilldale maintained that status in 1922 before becoming a charter member of the Eastern Colored League in 1923, which Bolden helped to found.

Besides his above-average heater, Cockrell’s uncanny control of the “wet one” propelled his rise. Whereas the NL and AL banned the spitball and other adulterated pitches after the 1919 season (though 17 pitchers were given exemptions), subsequent Black major leagues, such as the Negro National League and Eastern Colored Leagues, as well as independent professional teams did not. “Cockrell was a great pitcher,” said Hilldale teammate shortstop Jake Stephens. “[B]ut you hated to play behind him because he threw that greaseball and you would get ahold of the grease sometimes and just couldn’t throw it.”6

It is perhaps impossible to determine how many games Cockrell won in his professional career. According to the Seamheads database, he went 102-73 (1917-1934) against Black professional competition. These figures represent just a fraction of Cockrell’s pitching decisions, as the Hilldale Club annually played 150 to 190 games, the majority of which were against White and Black semipro and club teams within the Philadelphia-New-York-Washington triangle.7 During the first five years of the ECL (1923-27), Cockrell posted a 54-29 slate while Hilldale captured the league’s first three titles. Cockrell’s legacy is often tied to the inaugural Negro League World Series in 1923, when he started (and lost) the opening game to the future Hall of Famer and most famous spitballer in Black baseball Bullet Joe Rogan and the eventual champions Kansas City Monarchs of the NNL. The following season, Hilldale exacted revenge against the Monarchs in the World Series, claiming the title, five games to one, with Cockrell winning the deciding game.

Cockrell is credited with at least five no-hitters in his professional career, including two against Negro National League teams. Less than one year after his gem against the Stars, Cockrell held Foster’s Elite Giants hitless at Schorling Park in Chicago on August 19, 1922. The other three were against the All Nationals of New York, 1919; Paterson (New Jersey) Silk Sox, 1922; and Cape May (New Jersey) in 1933.8

As the 1921 season wound down, Hilldale hosted the Stars, “regarded as one of the fastest colored teams in the Middle West,” opined the Courier-Post, in a four-game series spread over a six-day period at Hilldale Park.9 As Sunday baseball was still prohibited in Philadelphia, Hilldale played its home games primarily on Friday and Saturday afternoons, as well as holidays, at its well-kept yet quirky wooden ballpark with its seating capacity of about 8,000. Located in Darby, five miles from Philadelphia, the ballpark, according to Neil Lanctot, featured a treacherous outfield, pocked with tree stumps and a large depression in center field, while a brook flowed under the outfield wall.10

The series between Hilldale and Detroit began with Hilldale falling, 3-1 on September 3.11 Cockrell pitched briefly in relief, replacing starter Willis Flournoy, who was tagged for two runs in the eighth. After defeating St. Carthage, 10-4 in Cardington, Pennsylvania, the next day,12 Hilldale was back at its home ballpark for a Labor Day doubleheader on September 5.

With temperatures reaching the low 90s, it was a perfect day for baseball.13 And with the Athletics in the nation’s capital and the Phillies in Brooklyn, the “Daisies” and the “Darbyites,” as the club was often called, were the biggest baseball story in town. Nonetheless, coverage of the game in Philadelphia newspapers, among them the Inquirer and Evening Ledger, was scant. (Box scores of the twin bill are available, but not a detailed play-by-play summary of the games.) Hilldale’s biggest crowds traditionally turned out for games played on holidays.14 Though attendance figures were not published, one can plausibly assume that a capacity crowd was on hand.

“[T]he real thriller came in the afternoon session,” exclaimed the Inquirer.15 It featured Cockrell, a veritable double-threat in 1921. Praised by the Inquirer as a “pitching ace”16 and by the Evening Ledger as a “pitcher-slugger,”17 Cockrell was credited with an 8-5 record and nine complete games in 10 starts against Black professional competition in ’21 while also batting .360 and slugging .640 on 18 hits, half of them for extra bases.

The contest unfolded as a tense pitchers’ duel. On the mound for player-manager Pete Hill’s club was 20-year-old right-hander Bill Holland, in the third season of an eventual 23-year career. The 5-foot-9, 180-pound hard thrower led the NNL in 1921 with 149 strikeouts in 218 innings while completing 22 of 24 starts, relieving regularly, and posting a 15-14 slate.

Cockrell and Holland exchanged zeroes until Hilldale broke through with two runs in the fifth and tacked on two more in the seventh in an eventual 4-0 victory. The Daisies’ offensive star might have been 21-year-old future Hall of Famer Judy Johnson, who collected two of the club’s eight hits and scored a run. Johnson had played briefly with Hilldale in 1918, yet was overmatched and spent the next two seasons with Hilldale’s farm club, the Philadelphia-based Madison Stars, before rejoining the parent club for the 1921 season. Like Johnson, Chaney White and Bunny Downs chipped in with two hits, though neither scored. Cockrell went hitless but was one of four players to score a run.

Accord to the Inquirer, Cockrell did not yield a semblance of a hit during his no-hitter.18 The box score suggests that the Stars pounded his spitter into the ground all afternoon. Outfielders recorded only five putouts while Cockrell fanned six. The other 16 outs were registered in the infield, including 10 putouts by first baseman Toussaint Allen. Player-manager Francis and Allen were charged with the club’s only two errors.

Epilogue: Hilldale resumed its series with the Stars at Hilldale Park on Friday, September 8. With games scheduled almost every day from April through September, the Daisies were anything but idle on the intervening two days. On September 6, they defeated semipro Bridesburg, 6-0, at the baseball grounds at Richmond and Orthodox Streets in northeast Philadelphia.19 The following day, Hilldale engaged the Stars, in Camden, New Jersey, across the Delaware River from Philadelphia. In a wild game, Hilldale scored twice in the ninth to win, 3-2.20 In yet another exhilarating game, Hilldale and Detroit concluded their series at Hilldale Park with one more pitching duel. Taking the mound on just two days’ rest, Cockrell tossed a two-hitter. So too did his opponent, right-hander Bill Force. Hilldale and Cockrell emerged victorious, 2-1, when Force’s wild throw with no outs in the ninth permitted the winning run to cross the plate.21

In addition to the sources cited in the Notes, the author accessed Seamheads.com for all Black baseball and Negro League Baseball statistics, and SABR.org.

2 “Detroit Stars Fail to Twinkle Once.”

15 “Detroit Stars Fail to Twinkle Once.”

18 “Detroit Stars Fail to Twinkle Once.”