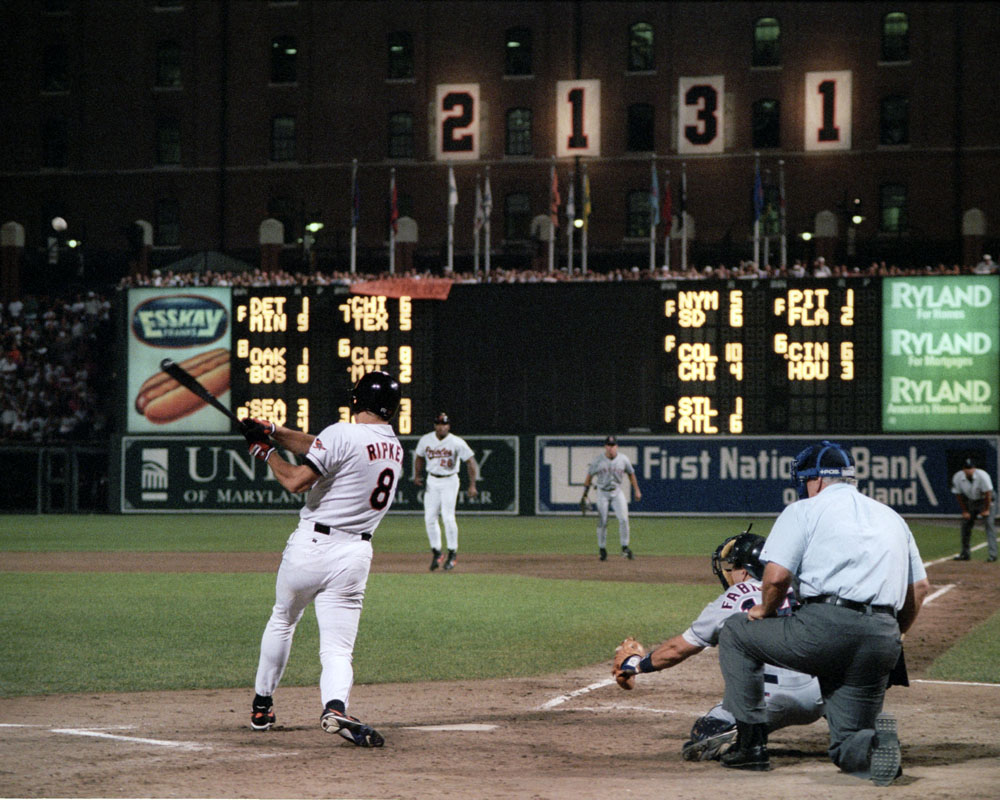 The outcome of this game was of little importance to the fans of two cities separated by less than 200 miles. The New York Yankees’ record was mediocre, a pedestrian 60-61, only slightly better than that of the 56-65 Baltimore Orioles.

Fans, players, and media focused on one thing. Fifty-six years earlier, Lou Gehrig, the Iron Horse, had removed himself from the lineup after playing 2,130 consecutive games. It was arguably a record that could speak more about perseverance than pure baseball skill. Now, in a game in which numbers are heralded, the baseball world watched as a new number readied to take its place on the altar of adoration. The night before, iron man Cal Ripken Jr. met Mr. Gehrig at 2,130; this evening, Ripken moved on.1

Robert Janes, a Vietnam veteran, strolled into Camden Yards from Eutaw Street. He gazed at the numbers across the red brick warehouse. “When this game is official, they’ll change that last digit to a one. Ripken and Baltimore can call this hallowed record ours!” The not-so-veiled joy in swiping another record from the New York franchise evident, he laughed, “Nah, Gehrig was a class act.”2

The pregame atmosphere was different. The usual competitive edge and enmity was absent. Lou Gehrig played the game and conducted his life with great dignity and professionalism. Even at the moment he understood his outlook was grim, Gehrig let the baseball world know he was thankful and fortunate for the life he had.3 Ripken possessed similar qualities: integrity, character and humility. The mantle of longevity set to pass from one gentleman to another.

When the record you’re about to break spans 14 years, it’s not easy to put your finger on the moment the pressure eases. For Ripken, that occurred the night of the game. He was healthy, his name penciled onto the lineup card. In the surreal atmosphere, he was able to enjoy the moment, accepting the disruption of his pregame ritual. Hundreds of well-wishers greeted him. He handled a lengthy interview under the stands gracefully.

Luminaries, including President Clinton and Vice President Gore, offered their congratulations and in return each received an autographed ball and a warm-up jacket. The warm outpouring of congratulations from world-class athletes overwhelmed Ripken. Gifts nearly filled the clubhouse. The most touching moments for Ripken, perhaps, came when Baltimore Colts legend Johnny Unitas and the man who surpassed Babe Ruth’s career home-run record, Hank Aaron, presented him with their jerseys.4

His record-breaking moment required Ripken to just show up, play, and let the game become official. Pressure built in the final few days before the record-setter. Just don’t get hurt. As Ripken and his Baltimore teammates took the field, nervous energy evaporated. All that was left was for the teams to complete five innings of play, unless Baltimore led after the top of the fifth.

With two outs in the top of the first, Tim Salmon homered, giving the Angels the lead. Rafael Palmeiro matched him with a homer to right field in the bottom of the frame. In the bottom of the fourth, the game still tied, Bobby Bonilla led off. With a 1-and-1 count his sweet swing sent Shawn Boskie’s pitch sailing to deep center. This disrupted TV commentator Chris Berman’s wordy comparison of Gehrig and Ripken as homegrown heroes playing for the teams they loved: “Edmonds turns back back back back back gone.” The ballpark erupted. The Orioles took the lead and fans understood the significance.

Once the cheering stopped, Ripken stepped to the plate. Boskie’s first three pitches were narrowly off the strike zone. The ever-disciplined Ripken laid off. Thousands of lights flashed with each pitch. Cal readied for the next offering. Boskie served up a fastball letter-high and slightly inside. Ripken turned on it quickly, ripping the ball into the left-field stands. “Ripped to left, oh my goodness he has done it again,” Berman exclaimed. “Did anyone expect Cal to limp into this streak, this record-breaking night?” Berman noted that Ripken had homered in three straight games. Icing on the cake. The Orioles’ lead extended to 3-1.5 Just three outs in the top of the fifth and the game was official. As long as the Angels did not score two or more runs.

Mike Mussina took the hill. Rex Hudler hit a soft popup near the left-field line, an easy out. Jorge Fabregas, the Angels catcher who two days earlier created consternation among Orioles fans with his hard slide into Ripken. (Cal shrugged the incident off as no big deal.) He respected players who play hard. On a full count, Fabregas hit a soft three-hopper to second, an easy out. Only Damion Easley stood in the way of history. Manny Alexander drifted back into short right and squeezed the soft fly into his glove, igniting the unprecedented midgame on-field celebration that erupted. Relief for the Orioles nation, friends, and family.

The record-breaking effort that began on May 30, 1982, continued.6 Dramatically, “2,131” was unveiled, black and orange balloons released. Fans screamed joyously. Players clapped. Ripken, after handshakes with teammates and modest waves with his hat to the crowd, jogged to his family for hugs and kisses, after handing his hat to his wife and the “shirt off his back” to daughter Rachel.7 He disappeared into the Orioles dugout. Fans kept on cheering. Reappearing after a few minutes in a fresh jersey, he took a seat on the bench ready to play. The fans kept on cheering. Finally, at the insistence of teammates he sheepishly walked back onto the field, waved with both hands, and patted his heart twice. Then he returned to the bench.

The fans continued to clap and cheer. In unison they chanted repeatedly, “We want CAL!” Once again Cal took the field, waved modestly, touched his heart, and returned. Boskie stood on the mound but did not move to begin his warm-ups. Ripken smiled as Bobby Bonilla and Rafael Palmeiro pushed him out onto the field. He hesitated, then slowly strolled down the right-field line.

As he circled the field, he shook the hands of hundreds of fans. Arms extended to touch him. Like Gehrig in his farewell speech, Ripken connected with everyone. He thanked all: groundskeepers, ballboys, coaches, and policemen. Reaching the Angels dugout, he greeted everyone. Hall of Famer Rod Carew, the team’s hitting instructor, hugged him, as did ex-teammate Rene Gonzales. Twenty minutes had elapsed. Ripken saw the clubhouse attendant Butch Barnett in tears. They hugged.8

Some athletes may have wanted to cherish the moment and remove themselves from the game. Not Cal Ripken: He played on. Perhaps he knew the man with steely blue eyes, who set the tone for his family looking down proudly at his son, Cal Ripken Sr. and his wife, Viv, expected nothing different.9

The game continued. With two out in the bottom of the fifth, Ripken came to bat with the bases loaded. Another storybook ending was not to be. He hit a soft liner that appeared to have a chance to drop, but second baseman Hudler made a one-handed over-the-head grab, ending the threat. The final four innings proved anticlimactic.

Joe DiMaggio, among others, offered a postgame tribute. Generally referred to as the greatest living player of all time when introduced, tonight DiMaggio was introduced simply as the Yankee Clipper. A hush fell over the park as DiMaggio stepped to the microphone to say, “Wherever my former teammate, Lou Gehrig, is today, I’m sure he’s tipping his cap to you, Cal.”10

Ripken delivered a “heart-tugging speech,” thanking those who played an important part in his life as well as the fans. “Tonight, I stand here, overwhelmed, as my name is linked with the great and courageous Lou Gehrig,” Ripken said. “This year has been unbelievable. I’ve been cheered in ballparks all over the country. People not only showed me their kindness, but more importantly, they demonstrated their love of the game of baseball. I give my thanks to baseball fans everywhere.”11

On April 26, 1920, when Everett Scott passed George Pinkney at 578 consecutive games, the game was played in front of fewer than 5,000 fans.12 There was no postgame accolade. On August 17, 1933, Gehrig passed Scott at 1,308, in a game with sparse attendance at Sportsman’s Park in St. Louis. Edgar G. Brands, publisher of The Sporting News, handed the Iron Horse a commemorative trophy in a modest postgame recognition.13

On September 20, 1998, Ripken walked into Ray Miller’s office and announced to his manager that he “wanted out of the lineup,” ending his consecutive-game streak at 2,632. Ryan Minor and Babe Dahlgren, the Ripken and Gehrig replacements respectively, are inexorably linked for all time as a footnote to these great accomplishments.14

Lou Gehrig’s Yankee Stadium monument inscription reads, “an amazing player whose record of 2,130 consecutive games played should stand for all time.” Most likely for Cal Ripken, 2,632 will.

8 Buster Olney and staff reporter, “2,130: With the Streak Second to None, Cal Trots into Record Books,” Baltimore Sun, September 7, 1995. https://www.baltimoresun.com/sports/orioles/bal-2-131-with-streak-second-to-none-cal-ripken-jr-trots-into-record-books-20150830-story.html