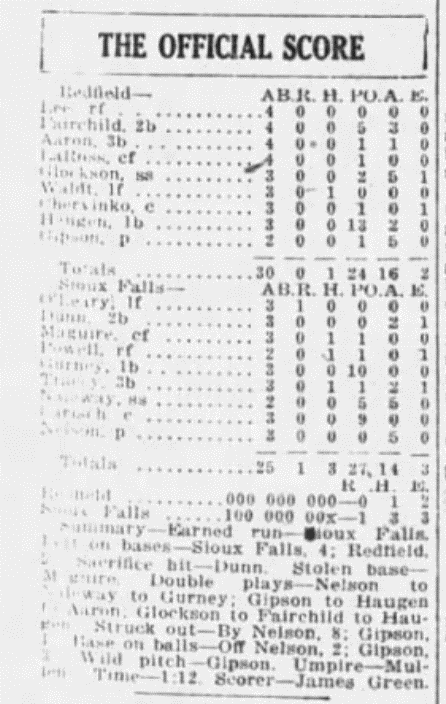 For a certain type of twenty-first-century baseball fan – one numbed by too many pitching changes, mascot races, launch angle analyses, and Internet hot takes – a kind of mental balm can be achieved by contemplating an afternoon pitchers’ duel on a cold, windy, overcast day in South Dakota a century of Septembers ago.

The game featured two independent Class D minor-league teams meeting on a muddy field in Sioux Falls in front of a handful of fans near the season’s end. The Sioux Falls Indians1 garnered three hits, the Redfield Red Sox2 only one, in a game that took just 1 hour and 12 minutes to complete. The home team stitched together a run in the first inning and made it stand up, with good fielding on both sides adding spice to a hard-fought contest. There was nothing of deep historical significance about the matchup. It was just one of countless baseball games that entertained spectators at the time, then moved into history’s shadows to welcome the occasional curious visitor from the future.

The backdrop to the action was the Dakota League, a circuit technically in its first year of operation but a clear heir to the previous season’s South Dakota League.3 Seven of the circuit’s eight teams hailed from the eastern half of the state, east of the Missouri River, representing communities as large as Sioux Falls (population: roughly 25,000) and as small as Redfield (population: roughly 2,700).4 The eighth team represented the twinned border municipalities of Wahpeton, North Dakota, and Breckenridge, Minnesota.

South Dakota had been granted statehood only 32 years earlier, and some indicators marked it as still developing. Modern roads were in early stages, with the state highway department founded in 1917 and a law on road and bridge construction adopted two years later.5 State news headlines from September 1921 included a fire in the central business district of the town of Bradley that destroyed the local telephone company; an automobile trip by business leaders through the eastern part of the state; and the publication of the first photograph of Sioux Falls ever taken from the air.6

But while the Dakota League was a modest operation in a developing pocket of the country, it would be wrong to picture it as a career dead end or a galaxy millions of miles from the major leagues. George Stueland, ace pitcher for Sioux Falls in 1921, parlayed a 22-9 season in the Dakota League into a contract with the Chicago Cubs. Before the season’s last game, the Sioux Falls team presented Stueland with a gold watch and a pair of spikes, and fans passed the hat to send him to the majors with some pocket money.7 Stueland made two appearances with the Cubs at the end of 1921 and pitched in 45 major-league games over a four-year career.

Another pitcher paying his dues in the 1921 Dakota League, 21-year-old George Pipgras of the Madison Greys, reached the New York Yankees two years later and stayed in the big leagues for 11 seasons. The right-hander won three World Series titles and led the American League with 24 wins in 1928.8 Sioux Falls pitcher Wee Willie Ludolph and infielder Frank Naleway, Watertown pitcher-first baseman Lefty Taber, and Aberdeen infielder Pete Turgeon also reached the major leagues. While their careers there were brief, they proved that the Dakota League was connected to the national baseball scene, and players who began there could work their way up to bigger things. (Fifteen years later, pitching in the Pacific Coast League, Ludolph surrendered the first professional homer hit by 18-year-old Ted Williams.9)

The loop also attracted some who had already been to the big time, like Sioux Falls catcher-manager Fred Carisch, who played parts of seven seasons in the majors between 1903 and 1914. As a coach with the 1923 Detroit Tigers, Carisch resurfaced in the big leagues with two fill-in appearances at age 41. The next year, he served as Detroit’s interim manager for the final game of the year.10 The league’s senior umpire, 60-year-old Perry Werden, went back even further in pro baseball. Werden played parts of seven seasons between 1884 and 1897, twice hitting more than 40 home runs in the 1890s in an independent league – numbers unmatched until the arrival of Babe Ruth.11

Sioux Falls came into the September 7 game with a record of 57-34, in second place behind the league-leading Mitchell Kernels. Redfield stood in fourth place at 46-44. The game took place at Sioux Falls’ East Side Ball Park, which had suffered substantial damage the year before when a tornado carried off its wooden grandstand and dropped it on a nearby street.12 The home team gave the start on the mound to 39-year-old Clarence Nelson, a 5-foot-9, 145-pound lefty nearing the end of a 13-season minor-league career. Nelson posted a 13-11 record in 1921.

Redfield manager Harry Wingfield, who had taken the reins of the club about a month before,13 also started a left-hander, identified in game accounts as “Gipson.” Gipson had beaten the Indians a few weeks earlier, 4-1, on a five-hitter.14 That game was reportedly his first appearance in the league.15 Gipson had been dropped from the Redfield team in preseason tryouts and was reported to have joined a semipro squad in Minnesota, but presumably made his way back to Redfield later that season.16

Baseball-Reference’s directory of minor leaguers does not include any players named Gipson from that time period,17 and while a few Midwestern newspapers of the period mentioned a pitcher named Gipson, none saw fit to include his first name. The Daily Argus-Leader of Sioux Falls noted high turnover among league pitchers, explaining: “Due to the fact that many hurlers come into the league, pitch a few games, and then leave, it is difficult to keep accurate accounts of all the men.”18

Sioux Falls scored the game’s sole run in the bottom of the first inning. Left fielder Mike O’Leary led off by drawing a walk. Second baseman Jimmie Dunn sacrificed him to second, and a groundout by center fielder Gordon Maguire moved him to third. Gipson then threw a wild pitch past right fielder Jack Powell, allowing O’Leary to come home. Powell singled, but the rally ended there.19

Gipson yielded only two additional hits to the home team – a single by third baseman Jack Tracey in the second inning, and a single by Maguire in the sixth that was nearly caught by Redfield left fielder John Waldt. Maguire caused a brief stir on the basepaths by stealing second, then continuing to third when no one covered second to take catcher Steve Chervinko’s throw.20 Powell drew a walk to put runners at the corners, but first baseman Frank Gurney ended the inning with a grounder to shortstop. Gipson was not overpowering, notching many of his outs on popups.

Waldt recorded Redfield’s sole hit of the day, leading off the fifth inning with a clean base hit to right. An infield out by Chervinko advanced him to second, but Nelson struck out the next two hitters to end the inning. The only other play resembling a hit for Redfield came in the third inning, when right fielder Powell misjudged a windblown fly ball for an error. The Sioux Falls newspaper noted that Powell later made up for his misplay with “a star running catch.”

In fact, while each team made two errors, the Sioux Falls paper praised both sides for their “snappy” fielding, noting: “The fielders played high class baseball, some of the plays reaching the sensational.”

Sioux Falls shortstop Naleway – later to play a single game for the 1924 Chicago White Sox – lost two potential hits to strong plays by Redfield’s infielders. It was fitting, then, that he took part defensively in all three Redfield outs in the ninth inning. For the third out, Naleway gave the fans one last sensational play, ranging behind second base to stab a grounder. It was the Indians’ eighth straight win.21 The newspaper added that “only a few fans” turned out, but those who did were “repaid with their trouble” with a well-fought contest.

The season ended less than a week later with Sioux Falls still standing second, with a 62-34 record, and Redfield still in fourth at 47-47.22 And at that point, our sepia-toned visit to 1921 ends. The long-ago players in baggy woolen uniforms walk off the field and into history, leaving us back in the world of five-minute replay reviews.

Redfield left the league after the 1921 season and, a century later, has not hosted a professional baseball team since. The year 2021 also marks the 50th anniversary of Sioux Falls’ last affiliated team, the 1971 Sioux Falls Packers of the Class A Northern League.23 The city has hosted independent teams since the 1990s.

Neither Baseball-Reference nor Retrosheet provides box scores of minor-league games, but the September 8, 1921, edition of the Daily Argus-Leader (Sioux Falls, South Dakota) published a box score.

1 Baseball-Reference refers to the team as the Sioux City Soos. But local newspaper coverage from 1921 consistently refers to them as the Indians, with “Soos” sometimes used as a secondary nickname, the way a Baltimore newspaper might occasionally refer to the “O’s.”

2 Baseball-Reference calls the team the Redfield Reds but newspaper coverage from 1921 calls them the Red Sox, using Reds as a secondary nickname.

8 After his playing career ended, Pipgras worked as an American League umpire from 1939 to 1945.

10 The unusual circumstances of Carisch’s appearance with the Tigers on July 4, 1923, were featured in Volume 6 Number 1 of the Retrosheet newsletter and can be read here. Accessed online February 15, 2021.

17 Baseball-Reference lists a few first-name-only pitchers named Gibson who played in the minors in the first half of the 1920s, but surviving newspapers from 1921 seem consistent in spelling Gipson with a “p.”

19 All summary of game action in this story is taken from “Nelson, Blanking Reds, Hurls His Second One-Hit Game of Season.”