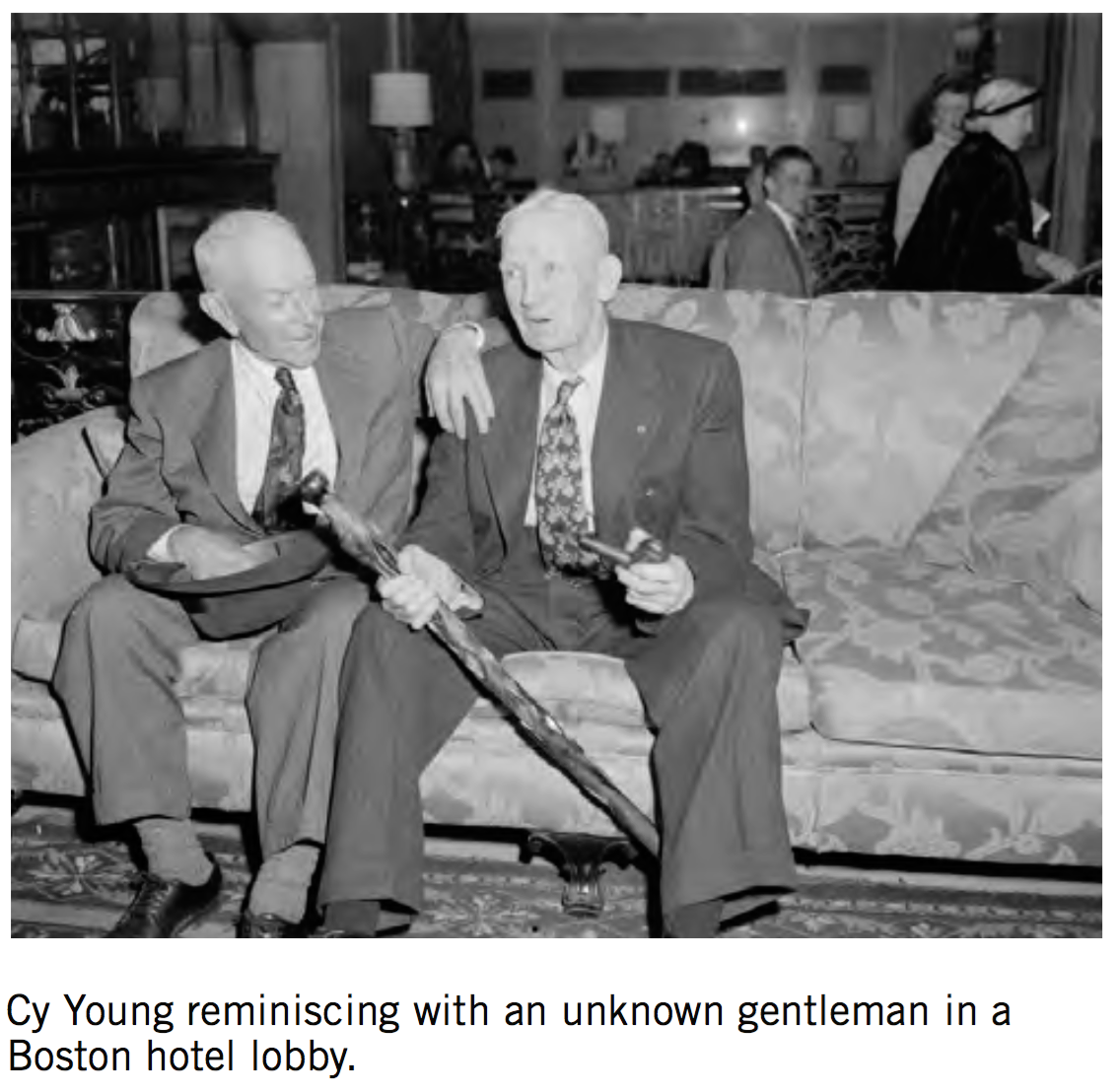 The romantic affection which Boston always has for the players who have made big league history throbbed into thunderous beat.” – Burt Whitman, Boston Herald.1

The band began to play some old familiar favorites, including “Silver Threads Among the Gold” and “Love’s Old Sweet Song,” a grand beginning on that picturesque Boston day. Then, like a portal to the past, the right-field gates clanged open and in “came rolling the old green tallyho2 with old Pat Daley in his venerable stove pipe hat, proudly ‘driving the Boston team to the ball game,’” observed Bill Cunningham of the Boston Post.3 Older Boston fans would have recalled the days when they heard the “clop, clop, clop” of horse hooves approaching the Walpole Street Grounds, transporting the visiting team from the Quincy House or the United States Hotel, where they had dressed for the game.4 This was a day to reminisce on memories such as these and many more, as Braves Field was host to an Old-Timers Game, featuring future Hall of Famers from the 1880s to the 1920s.

Some 22,000 fans came to Braves Field on this day, September 8, 1930, to see these “tottering heroes of a bygone day, the passing veterans of a later generation,” as Paul H. Shannon of the Boston Post put it. 5 This Old-Timers Game was between old-timers from both Boston teams and an “all-star” team of old-timers. The players had Braves Field all to themselves, as the current-day Braves had this Monday off. Unlike modern old-timers games immediately preceding a “regular” game, this game could stand on its own by the presence of these legends. It was sponsored by the Post, with proceeds being given to the Children’s Hospital of Boston and the Professional Baseball Players of America Charity Fund. Over 50 old-timers were present.6

Before the tallyho began its trip to the ballpark, Joe Conway and crew of the Horace Partridge Company7 were on hand with extra pants, shirts, socks, and shoes, as some uniforms were “a little tight” on these legends. Honus Wagner needed socks because his dog had chewed his while he was packing his suitcase.8

Candy LaChance’s famous mustache “has withstood the attack of the years. It’s still in place and going strong,” wrote Cunningham.9

As the tallyho rolled in, “The years rolled back for them as its creaking wheels turned, and the ovation … thundered and quivered as it came up the first base line,”10 Cunningham wrote. The players stepped off the carriage to great applause. “Baseball games may come and go, but probably never again will lovers of baseball see a more illustrious assemblage of diamond heroes,” wrote Ford Sawyer of the Boston Globe.11

Fred Hoey, the radio broadcaster for Braves and Red Sox home games, called the game on WNAC alongside Bill Cunningham. The game was also carried by CBS radio, the first such national baseball broadcast to emanate from Boston.12 Jake Morse and Walter Barnes were the official scorers, as they were 30 years prior, and Jim Shannon was again working the telegraph wires.13 He had “sent his first baseball box score over the country in 1886 from the Walpole Street Grounds.”14

Fans became teary-eyed when the old-timers gathered for a group photo, as the band played “Auld Lang Syne.” Many removed their caps “exactly as if the band had begun the National Anthem. … It was a simple thing, but a memorable one. …”15 A fan brought his baby to be photographed with Honus Wagner. As the legend cradled the infant, wrote Cunningham, “you’d have got a new slant on that celebrated and soft-hearted old Dutchman and seen something never duplicated on any baseball field.”16

Cy Young (age 63), took his place on the mound for Boston again. After he pitched a scoreless first inning, the Boston Old-Timers scored two runs in their half of the inning. Jimmy Collins singled, Duffy Lewis doubled, and they both scored on Freddie Parent’s double, which was misplayed by Ty Cobb. The All-Stars scored a run in the second inning as a single by Ed Walsh scored Edd Roush. They took a 3-2 lead in the third inning on hits by Fred Clarke, Eddie Collins, and Roush. Boston countered in its half of the third inning with a barrage of hits that scored Tris Speaker, Duffy Lewis, and Bill Sweeney to give Boston a 5-3 lead. The All-Stars cut the lead to 5-4 in the top of the fifth inning as Stuffy McInnis reached on a muffed fly ball by Harry Hooper and scored on a single by Jack Barry. Boston scored three more runs in the seventh inning for the final tally of an 8-4 win.

Jimmy Coughlin’s 10th Infantry Band, famous for traveling with Boston’s “Royal Rooters” when Boston was in the World Series,17 resurrected “the strains of ‘Tessie,’ the inspiring song which spurred on the 1903 Boston champions,” reported Sawyer.18

Nick Altrock provided the comedy by running the bases in reverse and attempting to score from first base. He was called out at home plate by umpire Beans Reardon, whom Altrock jokingly put into a headlock that brought the house down. Eddie Collins delighted the crowd by chewing bubble gum he peeled off the bill of his cap.19 Harry Hooper thrilled the Fenway fans just as in old times with a beautiful catch to rob Rube Oldring of a hit.20 Hugh Duffy and a young 43-year-old Ty Cobb, who both had illustrious seasons of batting over .400, went hitless. Cobb was 0-for-3 for the All-Stars and 0-for-1 when he decided to bat for Boston in the eighth inning. Sixty-five-year-old Patsy Donovan, who had played for Boston in 1890, got a pinch-hit single in his only at-bat. Born a month before Abraham Lincoln was assassinated, Donovan would later coach baseball at Phillips Academy in Andover, Massachusetts, where one of his young players was future President George H.W. Bush.21

I doubt many would concur with the exuberant comments of the Post’s Arthur Duffey that “it was the greatest day in Boston’s baseball history,”22 but it was a shining moment in the history of Braves Field, and a special moment for players and fans alike.23 Still, time marched on.

“Baseball has taken its sentimental journey. The tallyho has gone back to the museum and the players to less strenuous tasks.”24

Special thanks to Bill Nowlin and Bob Brady for research assistance in writing this article.

Thorn, John. Baseball in the Garden of Eden: The Secret History of the Early Game (New York: Simon & Shuster, 2011).

2 A tallyho was similar to a stagecoach in that it was a “four-in-hand” coach: four horses controlled by a single driver.

3 Bill Cunningham, “More Like Huge Revival Session,” Boston Post, September 9, 1930, 25. Pat Daley had a long history of transporting baseball players and equipment, beginning with the Boston Braves in 1876. In 1901 he also began the same duties for the modern-day Red Sox, which he continued to perform into the 1930s. J.G. Taylor Spink’s column in The Sporting News, November 9, 1933, mentions Daley having just upgraded from the horse and carriage a couple of years prior. Melville E. Webb in the Boston Globe, April 9, 1933, said that Daley had been replaced by the Braves but was still working for the Red Sox. See Opening Fenway Park With Style: The 1912 Champion Red Sox, ed. Bill Nowlin (Phoenix: SABR, 2012), 27. The company itself still transports equipment for the Red Sox through the 2014 season. See also Fenway Lives: The Team Behind the Team: The People Who Work in and Around Fenway Park. (Cambridge, Massachusetts: Rounder Books, 2004).

4 Paul H. Shannon, “Heroes Of Other Days Thrill Mighty Throng,” Boston Post, September 9, 1930, 24. The Walpole Street Grounds in Boston was a stadium with a double-decked grandstand built in 1871. It served as the home of the Boston National League team until it was destroyed by fire in 1894. Also known as the South End Grounds, it was rebuilt, and was home to the Braves until Braves Field was built in 1915. Quincy House was a prominent hotel in Boston in the 19th and early 20th centuries.

7 Joseph F. “Joe” Conway was the president of the Horace Partridge Company and later served as the Braves’ treasurer at the beginning of the Quinn syndicate regime in 1936. The Horace Partridge Company was called the “Athletic Outfitter to the Braves.” See Bob Brady’s blog entry “The Braves Left a Trail in Boston,” retrieved from bostonbaseballhistory.com/braves-left-a-trail-in-boston/.

13 Walter S. Barnes Jr. was a Boston Globe sports editor.  Jacob C. Morse had worked for the Herald. At one time, a Walter Barnes Memorial Trophy was given by the Boston baseball writers to the outstanding Boston player.

23 The author attempted to trace the history of old-timers baseball games in Boston and beyond. The first discovered game could have been one among members of the New Metropolitans, considered the first organized baseball team. An old-timers game was played on September 27, 1875, according to the New York Clipper (“The Knickerbocker Club. Baseball in the Olden Time,” October 9, 1875, 221). The vets of 1850, referred to as the “Old Duffers,” played against the vets of 1860, referred to as the “youngsters.” A Metropolitans Old-Timers’ Game against Washington was played and included “the majority of the oldest men who played on the diamond in the sixties,” (“Some of the Old Timers,”Boston Herald, July 14, 1886, 8). A “Harry Wright Memorial Day” game was held in Rockford, Illinois, on April 13, 1896, and included the pitching of A.G. Spalding. An Old-Timers’ Game was held at the South End Grounds in Boston against a touring Australian team on June 20, 1897. “Father” Henry Chadwick, as he was called, served as a host for the Australians and lectured on the history of baseball. George Wright and A.G. Spalding played, the latter remarking “We’re not as spry as we used to be.” (“Vets in Armor,” Boston Globe, June 22, 1897, 4). Former player John Irwin owned a hotel on Peddocks Island, located in Boston Harbor, and each year from 1906 to 1910 (or possibly continuing until World War I), he hosted a yearly “Ye Old Timers’ Gambol” Game. Candy Cummings, credited with inventing the curveball, was one of the attendees. Braves Field had also previously hosted an Old-Timers’ Game on September 11, 1922, which also featured Cy Young.