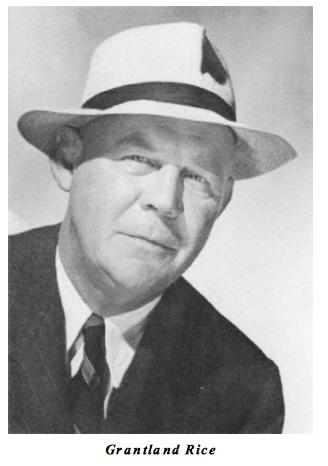 Even with the large number of new books on the Deadball Era published annually, it is worthwhile on occasion to recall prior works which illuminate figures who may have fallen a bit outside of the Deadball Era Committee’s view. One such person is writer Grantland Rice. Known best for his writing for the weekly magazine Collier’s, Rice himself was never a major league beat reporter, recognized instead for his prolific columns that touched on many sports and which often included a poem and clever twists of phrase. While Rice’s connection with baseball may seem attenuated relative to, say, the more regular interactions with players that Ring Lardner or Heywood Broun enjoyed, Rice nevertheless was influential in several important episodes of the Deadball Era.

Rice’s impact is given a comprehensive and thoughtful treatment in Sportswriter: The Life and Times of Grantland Rice by Charles Fountain, published in 1993. That Rice — a colossal figure in American sportswriting — has been the subject of only a few biographies (though two other volumes on him were published in the 1990s, including one by William Harper of more than 600 pages) may suggest that Deadball Era researchers would be better served to spend more time examining the role of reporters of the time, as these writers served as an essential liaison between the game and its burgeoning fan base.

Consider that when Ty Cobb famously sent postcards under various fictitious names to try and promote himself as a young player, he sent them to Rice, recognizing the impact of the then-local reporter’s writing. “He is a terrific hitter and faster than a deer,” said one, while another asked: “Have you seen Ty Cobb play ball yet? He is the fastest mover I’ve seen in baseball.” Rice subsequently wrote a column about the budding star which was overflowing with praise. That Cobb was in the major leagues within a year is often credited in large part to his surreptitious interactions with Rice.

In 1916, as Babe Ruth was firmly establishing himself as a star pitcher, it was Rice who suggested that praise for Ruth’s pitching prowess was overblown. Fountain noted that, in contrast to the praise that Rice often bestowed on young stars, he chided Ruth for being out of shape and exclaimed that “Ruth is still too young at this business to be classed with Rube Waddell or Eddie Plank or Nap Rucker.” Rice went on to say “quite a stretch of time lies between Ruth and lasting greatness.” It is reasonable to infer that the biting comments from Rice’s widely-read column made Ruth’s eventual switch to being a full-time hitter somewhat more palatable to his readers.

In 1917, Rice also used his platform to insist that John McGraw should be suspended for an incident with National League President John Tener. Rice’s columns, along with those of several of his contemporaries, drew attention to to the matter, applying pressure which resulted in McGraw’s eventual suspension.  Still, Rice is recognized more so today for helping to shape opinion of the Black Sox as the 1919 World Series scandal grew. He pointed out inconsistency in Eddie Cicotte’s play, for instance, saying, “Eddie, instead of jumping swiftly for the ball, took his time with all the leisure of a steel striker.” Playing up what Fountain called “the out-of-character aspect of (the team’s play),” Rice also used the word “fix” in print early on and also was outspoken on the deleterious effects that the performance of the Black Sox had on the game itself. Again, Rice moved and shaped popular opinion, having an effect on events that followed.

Of course, all contemporary baseball writers enjoyed outsized influence, essentially serving as the voices for particular teams to an audience which had few other outlets. But Rice himself had a disproportionate impact on the sporting scene of the early 20th century. In an interview with The Inside Game, Fountain said: “Rice was a combination of baseball-reference.com, the whole ESPN empire, and whoever passes as sports journalism celebrity today.” His column had an extraordinary influence.

There were other moments when Rice was ahead of his contemporaries. Rice himself noted “Every one (sic) knows the reserve clause in baseball will not stand the test of American law,” a sentiment uttered by few in the press at the time. There was also an element of craftsmanship to his writing, as Rice was strategic in his pronouncements while retaining an air of positivity. As Fountain points out in the book, although Rice disapproved of Connie Mack selling his Philadelphia Athletics players, thereby plunging the team into mediocrity, Rice did not take Mack to task for it in print; rather, he praised Charles Comiskey for being aggressive in purchasing players, as Rice knew that his own opinions about Mack would be inferred by readers.

Rice in part set the tone for sportswriting of the time, writing with what Fountain calls “respect for the intelligence and the involvement of the reader.” The same approach applied when Rice was writing about minor league baseball for the Nashville Tennessean from 1907 through 1910, his only time as a baseball beat reporter. Rice’s approach was literary and classically-based, deriving in part from his appreciation for Latin and the subtleties of language more generally. A phrase such as “the tumult dies” (in Rice’s famous “Game Called” poem from 1910) or a reference in a column to “crack slabsmen” imbue his work with creativity.

With time, Rice’s reputation has suffered as the core principles of journalism have changed. No longer do reporters ignore or brush aside the off-field behavior of athletes, as Rice did, nor do they serve as universally-happy mythmakers, intent on shaping a positive view of sports from top to bottom. “The role of the sportswriter at that time was to sell newspapers and tickets, and not necessarily in that order,” Fountain said.

Fountain suggests in the book that Rice’s rhapsodic, and usually uncritical, approach to covering star players would likely see him today banished to a local paper reporting on the exploits of high school athletes rather than taking on the hard-hitting issues of the day in professional sports. But the opposite side of that coin, according to Fountain, is that even if Rice had wanted to expose the character flaws of players he covered, he likely would not have had a receptive publisher:

“Had Rice written a piece about Ty Cobb that showed Cobb in all his complexity and nuance, Rice would have had a hard time finding a place to publish that,” Fountain said. “I doubt very much whether his syndicate of newspapers would have wanted that in a sports column, and I doubt very much whether Collier’s or any of the magazines that he wrote for would have wanted that in a profile. Readers wanted heroes in those days, wherever they were. He delivered what newspaper publishers and readers and magazine publishers and readers wanted at the time. Had he delivered anything else, they wouldn’t have bought it.

Rice now is often impugned for his lofty prose, with critics typically referencing his effusive 1924 column about Notre Dame’s football team. (“Outlined against a blue-gray October sky, the Four Horsemen rode again,” Rice wrote. “In dramatic lore they are known as Famine, Pestilence, Destruction and Death. These are only aliases. Their real names are Stuhldreher, Miller, Crowley and Layden.”) Still, whether he was analogizing major sporting events to Civil War battles or linking star athletes to figures from Greek mythology, Rice’s soaring prose helped to define sportswriting in his era.

Independent of whether one appreciates Rice’s writing style and approach, he is an important figure in the history of sports journalism and one who impacted the Deadball Era. Fountain’s work makes one appreciate how intertwined Rice was with the Deadball Era, even if Rice himself, because of the wide scope of his writing, is not viewed as a baseball reporter first and foremost. Rice’s baseball columns are one illustration of the impact that Deadball Era writers and reporters could have on the game, and his extensive body of work underscores how important a role a writer could play at a time when newspapers were indeed king.

JOHN McMURRAY is chair of SABR’s Deadball Era Research Committee. Contact him at deadball@sabr.org. This article was originally published in the February 2016 Deadball Era committee newsletter.