A gloomy fact of film history is that more than half the movies made during the silent film era are lost. Yet a smattering of materials related to the early motion pictures do exist, and occasionally, their origins are cloaked in mystery — including a set of five lobby cards from Spring Fever, a Honus Wagner short reportedly released in 1919.

Note: The following is excerpted from “Lost (and Found) Baseball,” first published in 2011 in “Base Ball: A Journal of the Early Game.”1It was reprinted the following year online in Our Game.2 Special thanks to John Thorn and Gary Mitchem. 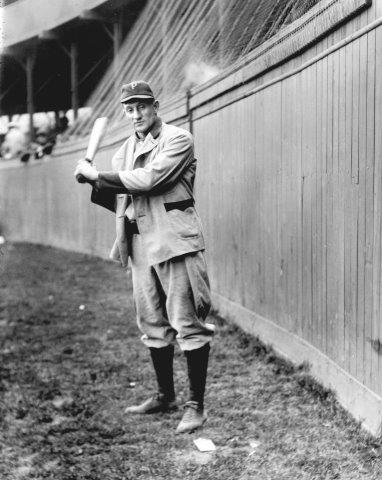 A gloomy fact of film history is that more than half the movies made during the silent film era (pre-1927) are lost—vanished into the mists of the passing generations. Yet a smattering of materials related to the early motion pictures do exist, and occasionally, their origins are cloaked in mystery.

For example, in 2004, Robert Edward Auctions sold a set of five lobby cards from Spring Fever, a Honus Wagner short that the auction house reported as being released in 1919. Wagner appears on three of the five, identified as “Hans Wagner.” Filmgraphs is cited as the film’s releasing company, but the company name is an addition, a photographed overlay. The cards were part of the Hall of Famer’s estate and were put up for auction by his granddaughter Leslie Blair Wagner.3

To be sure, Spring Fever is a curio, and not just because it features Wagner in a rare screen appearance. As described in the auction catalog:

In Spring Fever Honus Wagner teaches a young boy the skill of batting. Incredibly, the young boy in the film was Moses Horowitz [sic], who later became very well known as Moe Howard, of the Three Stooges.4 The cast of Spring Fever also included Moe’s brother, Shemp Howard. Now really, we must pause for a moment, to contemplate the fact that the great Honus Wagner actually starred in a movie with two future members of the Three Stooges, long before this comedy team’s formal debut.

The whereabouts of any existing print of Spring Fever, knowledge of the actual year in which it was made, and the possibility that it was originally released under a different title remain unanswered questions—much like the rest of Wagner’s screen career.6 Moe Howard died in 1975 at the age of 77, and apparently, late in life, he claimed to have appeared with Wagner in 12 short films. All supposedly were made in the early 1920s, a “fact” that is casually noted in a number of Three Stooges histories. “Besides stage work,” reads The Three Stooges Scrapbook, written by Jeff and Greg Lenburg and Moe’s daughter, Joan Howard Maurer, “Moe also appeared in 12 two-reel shorts with baseball great Hans Wagner.”7 However, in a 2005 post on a Three Stooges forum, a user named BeAStooge wrote: “In the early ’90s at one of the Philadelphia (Three Stooges) Conventions, Joan Howard told me she did not know where the Lenburgs got that information; as co-author, it did not come from her, and she was not aware of anything in her father’s papers that may have sourced the information.”8

In The Three Stooges, Amalgamated Morons to American Icons: An Illustrated History, Michael Fleming reported that a “series of twelve two-reel silent sports comedies (were) filmed outside Pittsburgh. The result: it’s a good thing Wagner could hit a curveball. He won five batting titles for Pittsburgh but was not Oscar material. ‘I think,’ said Moe, ‘that perhaps they made banjo picks out of the (films)’.”9 No detailed production information is cited in either book, and no record of their existence is found in the standard film history sources. (For the record, Wagner copped eight batting crowns.)

The Wagner/Three Stooges connection remains an enigma to Three Stooges experts. “It has been written in the past that Moe and Shemp starred with Honus Wagner in the Spring Fever short and that Moe starred with him in 12 shorts,” wrote Wil Huddleston of C3 Entertainment, which owns the Three Stooges brand and sponsors the group’s official website. “As to which ones, I am not sure. Unfortunately, I do not have any way of confirming this because we do not have those shorts available to us.”10

Regarding Spring Fever, other sources — for example, the first edition of Total Baseball and Arthur D. Hittner’s Honus Wagner: The Life of Baseball’s “Flying Dutchman” — report that Wagner made the film in 1909 for the Vitagraph Studios. According to Total Baseball, “The movie showed Honus Wagner teaching a little boy the art of batting.”11 Hittner noted that the film “featured the famous ballplayer delivering batting tips to a young boy, played by Moses Horwitz.”12 Lending this credence is the fact that Horwitz/Howard was born in 1897; by 1919, he was no longer a “little” or “young” boy. Furthermore, the Vitagraph studio was located in Brooklyn, and the Horwitz brothers were born and raised in Brooklyn.

As listed in The American Film Institute Catalog, Film Beginnings, 1893–1910, Vitagraph released over 175 short films in 1909. None is titled Spring Fever, and most are long-lost.13 So perhaps the Spring Fever lobby cards are connected to the film’s retitling for re-release. Adding to the confusion is another 1919 short with the same title, this one a Harold Lloyd comedy. But the existence of the lobby cards is proof positive that Wagner did appear in a movie that at one time was marketed under the title Spring Fever.

ROB EDELMAN offers film commentary on WAMC Northeast Public Radio, and his byline has appeared in “Base Ball: A Journal of the Early Game” and dozens of other publications. He is a longtime Contributing Editor of “Leonard Maltin’s Movie Guide”; his books include “Great Baseball Films,” “Baseball on the Web,” “From Spring Training to Screen Test: Baseball Players Turned Actors” (co-edited with Bill Nowlin) and (with Audrey Kupferberg) “Matthau: A Life” and “Meet the Mertzes,” a double biography of I Love Lucy’s William Frawley and Vivian Vance. He teaches film history courses at the University at Albany.

4 Moe’s and Shemp’s birth name was in fact Horwitz, rather than Horowitz. Shemp later appeared opposite Dizzy and Paul Dean in Dizzy & Daffy (1934, Warner Bros.), a two-reel comedy in which he plays a half-blind hurler who quips, “The only Dean I ever heard of is Gunga.”

6 According to the Internet Movie Database, Wagner also appeared as himself in Al You Know Me (1915), a comedy short penned by Ring Lardner, and The Baseball Review of 1917, a documentary. Then in the IMDB summary for In the Name of the Law (1922), he “expanded his entertainment repertoire by catching baseballs dropped from the top of the ten-story city-county building in Pittsburgh while hundreds of people watched and cameras rolled. Pittsburgh Police Superintendent and former professional ball player John C. Calhoun dropped three balls more than 150 feet to a waiting Wagner who was able to snare the first and third ‘pitches.’ The film of the stunt was later shown at the Carnegie Theatre as a prologue entitled ‘In the Name of the Law.’” http://www.imdb.com/name/nm0905929/.