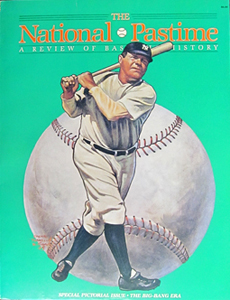 This article was published in the The National Pastime, Number 9 (1989)

This is the third special pictorial issue of The National Pastime, following those devoted to “The Nineteenth Century” (1984) and “The Dead Ball Era” (1986).

With this offering we bring SABR’s pictorial history of baseball from 1920, where we left on; to 1946. ‘The Big-Bang Era” on display in these pages was a remarkable period, spanning: the roaring twenties, in which America pursued riches and pleasure while Europe lay in the ruins the War to End All Wars; the economic ravages of the Great Depression; and the Second World War. Amidst all the swirl of change, baseball retained its sixteen franchises, in the sixteen sites that were in force in 1903; admitted no fundamental change in its rules; and held fast to the color bar that spawned parallel, if not rival, major leagues with legendary figures all their own.

But for all of baseball’s resistance to innovation, it did change in the years after 1920. The slash-and-run style of the teens was replaced by pursuit of the home run and the big inning. Trick pitches that resulted from doctoring of the ball were (officially) banned, and discolored, battered baseballs were removed from play. The ball was made more lively in certain years of the period and deadened in others, with dramatic effects on run scoring (and thus player statistics — it was no accident that the majority of the game’s great pitching records date from 1901-19 and its great batting marks from 1920-45). And the influence of gamblers, pervasive in baseball since the very beginnings of professional play, virtually ceased in the aftermath of the Black Sox Scandal of 1919. Revealed in September 1920, the World Series fix brought the commissioner system to baseball in the person of judge Kenesaw Mountain Landis.

Don’t think it was easy to get this far into the Introduction to baseball’s big-bang era without mentioning the man who made it happen: Babe Ruth. In this Golden Age of Sport, with such heroes as Jack Dempsey, Bill Tilden, Bobby Jones, and Red Grange, none achieved the stature of the Babe, a man whose fame is sung to succeeding generations almost from the cradle, in the way that tradition preserved the memory of Helen and Paris.

Ruth was unique but he was not alone among the gods. This glorious era gave us Lou Gehrig and Jimmie Foxx, Rogers Hornsby and Hank Greenberg, Lefty Grove and Carl Hubbell, Satchel Paige and Josh Gibson, Joe DiMaggio and Ted Williams. And it gave us the Gashouse Gang and Murderers’ Row, the Subway Series and the Mound City Series, the All Star Game, radio and night baseball.

But enough words; you’re here for the pictures, so let’s get on with them, after some acknowledgment of those who helped make this issue of The National Pastime possible. As with the first two pictorials, the editors visited many institutions and individual collectors, poring over thousands of images before selecting these. At our side throughout the two-year period of research and preparation was photographer and friend Mike Saporito. Tom Heitz and Pat Kellv of the National Baseball Librarv were monumentally helpful, as always, and are making available low-cost, high-quality prints of all images herein credited as “NBL”; write to Ms. Kelly for prices and ordering details, specifying The National Pastime Collection.

Special thanks go to Mike Aronstein of Photo File, Dennis Brearley, and John Spalding, whose photographic contributions are displayed copiously. To old friends and colleagues from previous issues who helped out this time as well — people like Barry Halper, Dennis Goldstein, Ken Felden, and Pat Quinn — we extend our gratitude. To Richard Puff, who pitched in during the final weeks and brought the book home, applause for a job well done. And to the skilled hands at Ag Press who have produced The National Pastime from its inception in 1982 — Dean Coughenour, Deb Wilds, Tom Carlin, Renee Whitney, and, earlier, Jim Sours — we say in all sincerity, these publications could not have been done without you.

And to our readers, who have patiently awaited delivery of this issue scheduled for last winter, we hope the results will prove the wait worthwhile.

Click the cover image to download the PDF edition of the 1989 The National Pastime (No. 9) to view this special pictorial issue in its original formatting: